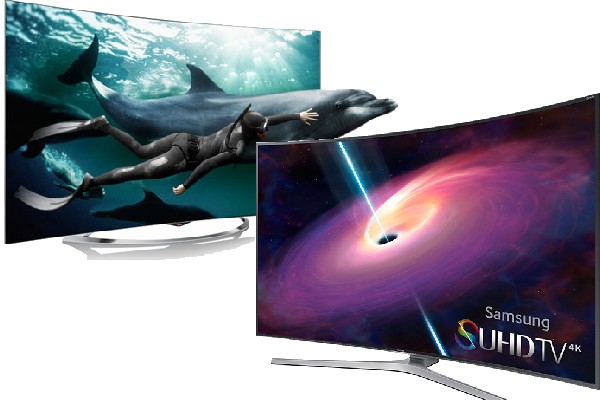 As new televisions arrive in electronics shops, custom installers and online stores, TV buyers are faced with an assortment of new technology terms and decisions: OLED TV or nano crystal technology or quantum dot. One of the most important questions buyers always ask is what’s the best flat panel TV.

If you had asked me that a year or two or more ago, I would have easily been able to answer—buy a plasma. And in most cases, the best plasma TVs were Panasonic plasmas. But those days are gone. No more plasma.

That doesn’t mean that the days of really great TVs are gone too. LED TVs have gotten considerably better since the first washed out and blotchy sets arrived years ago thanks to features like in-plane switching (IPS) and local dimming. Even better, new (or newish) technologies are hitting stores that have the potential to produce the best TV pictures we’ve ever seen. I’m talking about OLED and nano crystal (AKA quantum dot, SUHD… whatever). Both new display technologies look great, and they’re not merely theories any more—they’re real TVs. You may see some manufacturers comparing the two (claiming the technology they support is better than the other, of course), so let’s take a look at both so you know what you’re looking at when it comes time to look.

For this discussion, we need to focus a little bit on two words: emissive and transmissive. TVs that rely on emissive light—meaning that the image itself produces the TV’s light include CRT TVs (which can only be found in garage sales or my father’s rec room) and plasma TVs. Both of those use phosphors that light up more or less on the screen surface. Transmissive TVs have a light source behind them that produces the light and passes it through filters and whatnot. All LCD TVs are transmissive. The original CCFL LCD TVs used cold-cathode fluorescent lamps either behind or on the sides of the TVs. That light is transmitted from the lamp source, through the TV’s liquid crystals, and also through color filters. With LED-based LCD TVs, the CCFL part has been replaced by LED lights that can be more accurately controlled and somewhat locally dimmed.

First, what is OLED?

A OLED TV uses a layer of light emitting material within the panel in which the light-producing part is composed of an organic matter, such as carbon. This is an emissive technology because the TV’s image actually produces the light, rather than a light source behind the image. However, there are two ways to produce OLED TVs. One is LG’s method, called WRGB, which uses all white OLEDs behind color filters. The other method used red, green and blue OLEDs. The latter is more expensive and has proved difficult to produce in quantities to make it cost effective for large TVs.

What are the benefits of OLED?

Because individual OLED elements can be turned on and off, the technology produces near perfect black levels. They’re also plenty bright and don’t easily wash out in a bright room. The contrast on an OLED is incredible. OLED TVs also product very wide viewing angles, so the image doesn’t diminish when you move to the side.

OLED sounds great, right? Well, it should. Last year both LG’s and Samsung’s OLED TVs tied for first place in the Value Electronics HDTV shootout. The downside is their cost. OLED TVs, on a dollar per inch basis, are among the most expensive, though they’re coming down significantly from the $15,000 55-inch models that initially launched in 2013.

LG is currently the main force behind OLED. Samsung also offers them, but is much more bullish on nano crystals, which brings us to…

What are nano crystals or quantum dots?

Nano crystal or quantum dot technology is a new TV technology that uses nanoscopically small crystals (5 to 20 nanometers in size) as both a light and color source. In most TV applications, nano crystals of various sizes are spread across a thin film in the LCD display panel. When commanded, they emit light in various colors depending on the size of the crystal. The result is an LCD TV that is both brighter and features more enhances colors than a standard LED TV. Because a quantum dot TV still uses LED backlighting, these TVs essentially are a combination of both transmissive and emissive technology. While several companies, including LG, Sony, TCL and Samsung are putting nano crystals to work in new TVs, Samsung is probably the biggest backer of the technology and calls all its nano crystal TVs SUHD (the UHD stands for Ultra High Definition, but the S—who knows?).

What are the benefits of quantum dot?

Quantum dot TVs are still LED LCD TVs, and so they may exhibit some of the issues that some LED LCD TVs suffer from, such as uneven backlighting and less-than-plasma viewing angles, but for now at least, the TVs that are getting the quantum dot treatment are the manufacturers’ premium TVs, so expect to see them with the best features, such as small zone local dimming and in-plane switching panels.

Both of the above technologies will be featured in 4K Ultra HD TV sets. In 2014 LG and Samsung offered OLED in 1080p models, and those models persist in 2015, but expect 4K take over the territory soon.

And what about those curves? Both OLED and nano crystal technology will be appearing in curved TVs this year. Despite how manufacturers pitch it, the curve is a design feature rather than a picture enhancement feature. If you like the look, go for it. If not, then sit on your hands until the curve fad wears itself out.