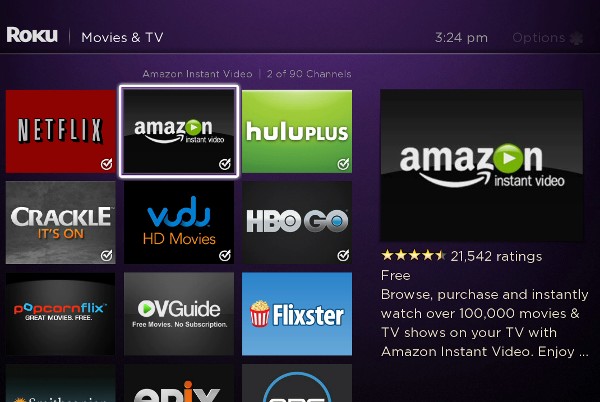 Not everyone wants to buy a new TV just to get access to all the latest smart TV streaming media features. And you don’t have to. A streaming media player, like Roku 3, Amazon Fire TV, Nexus Player or Apple TV can provide nearly all (or sometimes more) of the streaming media services and games that a smart TV includes built in, and they’re only $99 or less.

So if you want to add streaming audio and video to your home AV system, you now can choose between a small set-top-box (why do we still call them that when they don’t sit on top of TV sets anymore?) player, or a stick version that connects directly to the TV’s HDMI port. Roku 3 or Roku Stick? Fire TV or Fire TV Stick? If you’re stuck between a stick and box, here are some considerations before you buy:

Price The first thing you’ll notice when comparing a streaming box to its streaming stick sibling is the cost. A Roku 3 box costs $99, as does the Amazon Fire TV and Apple TV (Apple doesn’t have a stick version, yet). The Roku stick is only $50, the Amazon Fire TV Stick is $39, and the Google Chromecast is only $35. On price alone, it seems like the stick is the much better deal.

Connections All three of the streaming media sticks require one HDMI port to connect to a TV, plus a free USB port on the TV to connect for power. If your TV doesn’t have an available USB port, then a wall plug adaptor can also be used. To connect to your broadband network for streaming, all three sticks use Wi-Fi. If your Wi-Fi connection is strong, then you may be satisfied with that; however, for more reliable streaming, especially for high-definition movies and games, a wired Ethernet connection to your router is better, and for that you need the box versions of Roku or Fire TV, not the stick. Both the Roku 3 player and the Fire TV box include an optical audio output, which can be plugged directly into your AV receiver. This is useful if you have an older receiver or can’t use the receiver’s HDMI connection, but still want the best sound experience from your system (most audio return channel outputs on TVs downconvert the surround sound audio to stereo).

Size The size of a streaming stick is one of its best features. They’re about the size of a USB thumb drive, so they’re completely out of sight when plugged into an HDMI port on the back of the TV. With a streaming media box you need someplace to place the box. If you rely only on antenna and streaming, you can have a TV with no attached boxes to worry about. The size also makes them easily portable. You can buy one stick and move it around to the various TVs in your house without much trouble. They’re also easy to take with you on trips or visits (you’ll only need to reconfigure the wireless connection).

Remotes Here’s an area where the boxes rule. First, Chromcast doesn’t have a remote. You use your smart phone as the remote, and for some people, the convenience of that will be great. If you like a good remote, though, then you should opt for a streaming box over a streaming stick. Let’s take Roku first, The Roku 3 comes with a small, but very good, Bluetooth remote with an included headphone jack (and some cheap purple earbuds). The remote that comes with the Roku Stick does not include a headphone jack. Amazon’s Fire TV comes with a nice remote that includes a microphone for voice search. The stick version of Fire TV also has a remote, but the voice search feature is omitted. The remote on the Nexus Player also supports voice search.

Speed and Power If you’re an impatient person, the speed factor might be a deal-breaker for you. In order to make the streaming media players small and less power hungry (and cheaper) they don’t have nearly the processing power and memory of a streaming media box. This will make them slower when launching apps and searching content. It can also impact gaming. In fact there are games the Fire TV stick can’t play but the Fire TV box can. Also, if you power your stick with one of your TV’s USB ports, it will need to completely boot up each time you turn the TV on, which could take a few minutes. The box version are always plugged into a wall and always on. Content With a few exceptions in video games, the content on streaming media sticks vs. streaming boxes is identical. There is one issue that might convince you to purchase that new TV instead, and that’s 4K. Currently there is no streaming media device (except Sony’s $699 FMP-X10, and that’s primarily a hard-drive video server) that can deliver Ultra HD 4K video. A company called Nanotech has been promising one for a year, but it’s still not available. If you want to watch streamed 4K video from Amazon, Netflix or any of the other services that will be coming online this year, you need to use the app built directly into the TV. Will Roku, Apple and Amazon eventually come out with 4K video players? Probably, but not so far.

So which wins, the Roku 3 or Roku Stick? The Amazon Fire TV or Fire TV Stick? Google Chromecast or Apple TV? That largely depends on how you use the system and what you want to get out of it, but understanding the factors above should make the decision easier for you. If you decide you want to buy a new smart TV, Netflix will soon offer recommendations. Find out about the latest smart TVs for 2015 here.