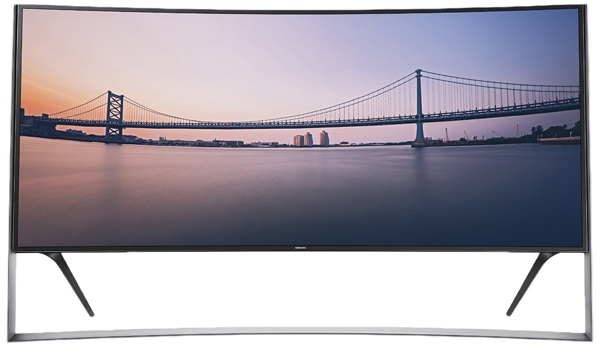 These days, there’s really nothing more eye-catching than a 4K Ultra HD TV. It’s very pretty and very lifelike, offering four times the resolution of a full 1080p HDTV. Now, imagine that picture blown up to a whopping 105 inches. That’s the Samsung UN105S9W.

This beast will earn you some serious bragging rights. First of all, it’s a big 4K TV. It also means that you have the space for such a TV—as well as the budget. This thing comes with an MSRP just as large as its size: $119,999.99.

Not that it isn’t worth the purchase price. It has a curved 21:9 screen that can wrap you up in the best at-home viewing experience you’ve ever had. It does that with a CinemaScope aspect ratio, which can bump the image up to a 5120 x 2160 native resolution. That translates into 11 million pixels! Other image features include Samsung’s Auto Depth Enhancer and upconversion technology, as well as UHD Dimming and Precision Black.

If this Ultra HD TV is too much screen, you can also turn it into four, via the Quad Screen Multi-Link feature. You can share some of that space with Samsung’s Smart Hub platform, which has access to all sorts of popular apps like Netflix, VUDU, YouTube and more, five panels of personalization on the home screen, and a quad-core processor.

Just in case you aren’t totally sold, know that the purchase price also comes with “Samsung Elite Service,” which includes an in-home visit from engineers who can calibrate the TV and explain how it works.