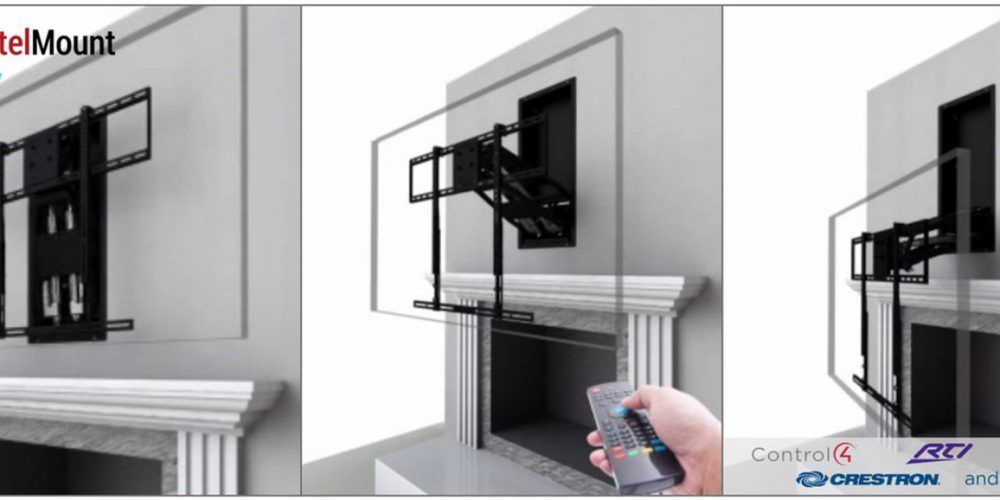 That big new TV might look great above the fireplace, but you’d have to strain your poor neck to watch it. MantelMount comes to the rescue with its first motorized mount that drops down and pulls away from the wall with the press of a button.

Debuting at the Custom Electronics Design and Installation Association (CEDIA) 2017 Expo, the new MM850 ($1,699 retail) works much like MantelMount’s other models, but this one has a motor that moves up/down, in/out, and left/right with the press of a button, voice command or trigger from a home-automation system.

The mount’s communication module integrates with third-party controllers via IP over a hardwired Ethernet or Wi-Fi connection. MantelMount says the product will work with “most major home automation systems right out of the box,” including Crestron, Control4, RTI and Amazon Alexa.

Or users can simply use the included RF remote from MantelMount.

Users can save up to six favorite TV positions. In addition, the system can be configured to move automatically to a preset location when it senses the TV powering on … and then return to its upright and locked position when the TV turns off.

Dual electronic actuators move the mount horizontally and vertically, and a multi-axis hub “allows the dual actuators to perform the complex drop and swivel motion smoothly and quietly,” according to the company.

In addition to its motorization and automation features, the MM850 is bigger and sturdier than MantelMount’s legacy manual models, accommodating TVs up to 100 inches and 130 pounds.

The motorized version is potentially safer than the manual models, too, with a separate sensor that tells the mount to retract when temperatures around the fireplace get too hot. (The manual mounts feature heat-sensitive handles that change color when heated, turning bright red at 110 degrees.)

The MM850 features higher-grade steel than previous versions, which explains how it can support TVs as heavy as 130 pounds. In addition, the new model provides vertical travel distance up to 32 inches, plus horizontal swivel up to 30 degrees in either direction. 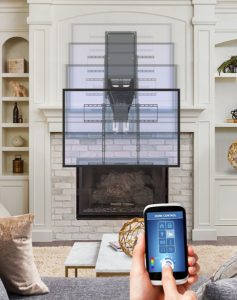 The off-the-wall distance of 19-22 inches ensures that the unit will clear practically any mantel size.

The MM850 comes with a flush-mount recess box that fits between studs. The center arm of the mount folds neatly into the box when the TV is in the raised position, leaving a mere 1.6-inch gap between the TV and the wall.