If you’re looking for a high-performance new LED smart TV, one of the best looking TVs of the year is Samsung’s UN65HU8550 4K Ultra HD TV. It combines a great mix of smart TV functions, easy operation (which is notable in such a feature-heavy TV) with excellent picture quality.

Ultra HD TV, or 4K TV, is the buzzword for new televisions now and for the foreseeable future (until 8K comes along), but that specification (which stands for 3,840 x 2,160 resolution) is stamped on a lot of TVs, so scoring a 4K TV alone isn’t going to ensure you get a top television. Samsung’s flagship flat LED model includes superb local dimming and a host of picture enhancements that put it above a lot of its competition.

You’ll notice I specified flat. A very similarly spec’d TV is also available in a curved version, but being that I still can’t figure out a good reason to choose a curved TV over a flat one, I prefer to recommend this model over the Samsung HU8700 curved LED TVs, which cost $500 more.

First, let’s go over the general package. The HU8550 is a 4K TV and includes built-in HEVC decoding, which makes it able to play back 4K video material, mostly from online sources such as Netflix or Amazon. The TV has four HDMI inputs that support the HDMI 2.0 spec and 4K video at 60fps, and one of those is MHL compatible, which means you can connect your Samsung Android tablet to watch video or whatever. It include three USB ports, which will accept 4K video from a hard drive or flash drive. In fact Samsung offers a hard drive packed with 4K movies, but I didn’t have access to that for this review.

One thing you’ll find on this TV that doesn’t feature on any other brand is a dedicated port for a Samsung Evolution Kit. That’s a box that plugs into the back of the TV to provide an upgrade should any amazing features come out next year. Samsung has been offering these Evolution Kits for a couple of years now as a way to make people feel comfortable that they’re not buying something that will go obsolete in a year.

The HU8550 comes with four pairs of active 3D glasses and two remotes. One is a standard wand-style remote, and the other is a small motion sensitive Bluetooth remote that can be used like a wireless mouse for web browsing or navigating Samsung’s Smart Hub apps.

This 65-inch model is only 54 pounds and 1.4 inches thick, so it’s not the thinnest TV ever seen, but the edge is half that thickness and surrounded by a gray metal band, so it would look sleek on a wall. The stand, if you’re going to use it, attaches pretty quickly.

FREE Special Report: What to Look for in a New Smart TV

If you haven’t upgraded your TV in several years, setup for this Samsung smart TV will be a little different. Samsung is one of a few companies that has been rethinking what a TV’s interface should be. For years users had one main input (either the cable/antenna input or later, the main cable box input) and then switched between inputs to view different sources, sometimes having to scroll though inputs when the TV’s remote didn’t have dedicated buttons. Samsung new Smart Hub interface aims to bring all the TV’s sources into one onscreen interface, which is helped by the fact that so much of the TV’s content comes from the Internet (the TV includes WiFi and Ethernet). The Smart Hub system, which is divided into five different screens (that you swipe through similar to swiping screens on a tablet) which focus on different content sources or types of navigation. One screen is dedicated to your cable/satellite box. In fact, the TV comes with an infrared control cable that attaches to the front of your cable set top box. In the setup process you tell the TV what service you use and where you live so it can download the correct program guide. The idea is that you can use the Smart Hub as your universal program guide, rather than the one built into your cable box. Personally I liked the process (because I hate the FiOS TV guide), but you may disagree. In addition to the program guide, the screens give you access to streaming services, content from attached hard drives or flash drives, online video games and more. The quad-core processor in the TV makes browsing and accessing all that content very fast.

Getting around all those options can be done the old fashioned way with the wand remote, with the Bluetooth remote, or with voice controls done by speaking at the TV. You can also attach a camera accessory for gesture control, but I didn’t try that. 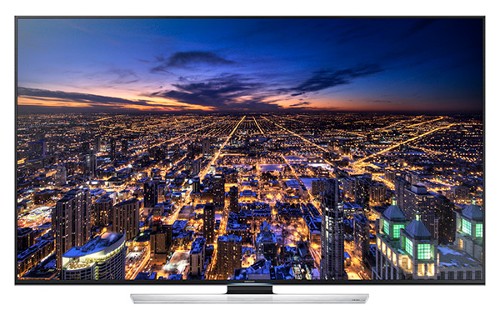 The TV has a lot of fun features, but picture quality is what counts most. Here the Samsung is a champ. The set includes lots of detailed picture settings for calibrators, but even without a full calibration, the TVs does well. While picture purists bemoan the demise of plasma TVs, this TV shows that LED LCD TVs, when done right, can be picture stars as well. The HU8550 has the benefit of LED’s brightness with the near-plasma quality black levels, resulting in an all-around impressive picture. One of the features that makes the HU8550 so good is the local dimming. While it is an edge-lit TV (rather than a full-array backlit model), the local dimming system in this set performs extremely well. What is local dimming? It’s when the TV is able to control the light output of individual zones of the TV based on the image being displayed there. For instance, if there’s a white spaceship flying across black space, local dimming will maintain the brightness of the ship while turning down the LEDs (which produce the TV’s light) in the parts of the picture that should be dark. The more zones of dimming, the better the overall effect. Samsung won’t say how many zones there are in this 65-inch set, but it seems like there are a lot of them.

Now about that 4K stuff. Buying a 4K TV this year is a little bit of a leap of faith—faith that you need it and faith that there will be more 4K things to watch. Currently there’s not a lot, though the amount is growing pretty fast. In the meantime, all (well, most) 4K TVs apply video processing to upconvert your non 4K content to Ultra HD resolution. Some TVs do a barely passible job of scaling to 4K, while others, like this Samsung, do an excellent job. While it can’t add more picture information than was originally there, the TV does add a level of smoothness to the images that enhances depth. Native 4K also looked great, and the fact that this is a big TV helped that difference stand out. I compared 1080p and 4K versions of the same content. The Ultra HD version allowed me to sit comfortably closer than the 1080p version, and it added depth and smoothness to the image. Some of that benefit was reduced as I moved back, but overall the picture was still very good.

If a 4K TV is for you, then I recommend a big one. This 65-inch model is right at the beginning of a TV size that requires it. Smaller TVs, unless you sit close, won’t benefit much from the extra resolution (thought the extra color space might be another thing, later). The Samsung HU8550 is an excellent choice for a flat, LED Ultra HD TV.