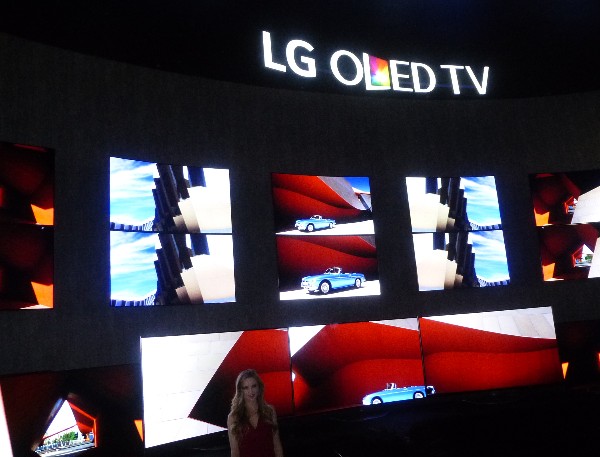 For me, the annual Consumer Electronics Show, held in the beginning of January every year, is always about televisions—the newest TVs, latest display technology, the most outrageous claims… This year’s CES mostly didn’t disappoint in terms of new innovations (and exaggerations) from the major television makers. There were super large TVs, super expensive TVs and TVs that did things just a little bit differently.

Here’s my brief overview of the most interesting new television trends to emerge from CES and some predictions on what it all means for the TV buying future.

For die-hard video enthusiasts, the final loss of plasma TVs last year was a low blow. With plasma display technology now in the past, everyone who cares about picture quality hopes something else will come to take its place. The most promising new display tech is OLED (organic light emitting diode). In 2014 both LG and Samsung released new OLED TVs, but LG clearly has put more of its pixels in that basket. Samsung is betting on some something it calls SUHD TV, which for 2015 refers to LED TVs with a nano crystal film in the display.

But before I talk too much about nano crystals (also referred to as quantum dots), let’s look at LG’s OLED plans. For 2015, LG is launching a total of seven new OLED TVs, all in 4K Ultra HD resolution, in sizes from 55 to 77 inches (both curved and flat models, plus one with a flexible screen). LG’s booth was practically tiled with OLED TVs (which is saying a lot, considering how expensive they are), but in a not-so-quiet alcove of the LG booth was a side-by-side comparison of an OLED TV with a conventional 4K LED LCD TV. The OLED was stunning and exhibited perfect-looking blacks (OLED, as an emissive technology, can completely turn a pixel off) and vibrant colors.

Panasonic also showed one prototype 4K OLED TV, but wasn’t saying much about it, and probably doesn’t have plans to offer it as a consumer product. Sony, which has shown similar technology in the past, wasn’t going down that road this year.

To counter LG’s big OLED push, Samsung announced the SUHD TVs (no one would give a clear answer on what the S stood for). The SUHD TVs are different from conventional LED LCDs in that they use quantum dot technology or nano crystals. In this TV technology a microscopically thin film made of nano crystals covers the display panel. The crystals themselves vary from 5 to 20 nanometers in size (very, very tiny). When charged with electricity, the crystals emit light, and that light varies in color depending on the size of the crystal. The benefit of this system is that it makes the TV brighter and enhances the colors. LG also showed nano crystal film TVs, but maintained OLED as the highest tier in picture quality. Samsung, claimed that their nano crystal TVs looked as good as OLED TVs, but cost less (no company released TV prices at the show).

Samsung this year will offer three series of nano crystal TVs in the SUHD line (all with 4K resolution) in sizes from 48 to 88 inches.

Ultra HD Dominates and it’s not all about the resolution

The other big display technology news was all about 4K. In fact, in most booths you really had to hunt around to find a TV that wasn’t an 4K Ultra HD model. At the press conferences, all the TV makers shared the prediction that by 2017 4K will make up two thirds of new TV sales. A few companies were even showing 4K resolution TVs in sizes as small as 43 inches.

While 4K won’t dominate TV sales in 2015, it certainly will dominate TV messaging. LG is up to 32 new Ultra HD models this year, which accounts for 60 percent of the company’s TV offerings. Sharp showed five new 4K TV series, including that 43 inch model (mentioned above) in the UB30 series that will start at about $750. Sharp’s UH30 line also includes THX 4K certification and includes an 80 inch model. Panasonic isn’t as bullish on TV as a whole as it used to be (the company’s booth had more hair dryers and electric shavers than TVs) but it did pledge 9 new 4K LED LCD models in three different series.

Samsung was especially aggressive on 4K, particularly curved 4K TVs. The company claimed that half of its Ultra HD sales in 2014 were curved screen TVs, and curved screens dominated the company’s CES exhibit.

Sony’s premium 4K Ultra HD TVs will come from the the X900 series, which in addition to sporting 4K resolution, are also incredibly thin at only .2 inches (thinner than an iPhone). The X900 series will also include a new X1 processor, though Sony wouldn’t offer much in the detail department on what that processor was, but noted that it does upscaling of resolution and bitrate and enhances colors and contrast.

Both Panasonic and Sony showed 4K camcorders so home users can create their own 4K content. One Sony 4K action camera, the FDR-X1000V, will cost only $500.

Sharp can always be counted on to do something a little different, and this year the company showed a TV it called “Beyond 4K” or “the world’s highest resolution 4K TV.” I know, that doesn’t make a lot of literal sense, but what it refers to is the pixel-splitting technology Sharp has used in the past. In this 80-inch model, Sharp adds an extra yellow subpixel to the TV’s pixel matrix to reach 167 percent of 4K resolution. The company claims the TV is able to reach over 100 percent of DCI color space and features full-array backlighting and High Dynamic Range compatibility.

Speaking of High Dynamic Range (HDR), that was a big part of the overall Ultra HD TV message from most manufacturers. Some consumers and reviewers have noted that the extra resolution of 4K TVs is only appreciated at very large screen sizes, but the potential of improved color is something that TVs at any size can display. Part of the Ultra HD specification allows for an improved color space, whiter whites and blacker blacks, and even Netflix has pledged to record new Ultra HD programs with HDR.

While 4K TVs may be filling the walls of home electronics stores, 4K video content is still a bit scarce, but CES had some news on that front too. Dish is releasing a new 4K set-top-box that includes HEVC decoding and HDMI 2.0 and will be able to receive 4K video delivered via satellite. Streaming services like Netflix, Amazon and Vudu will be adding more 4K content (but you better have a good broadband connection) and the TV manufacturers themselves are adding more 4K video to their smart TV platforms.

Finally, 4K from a disc is coming in the form of Ultra HD Blu-ray. Panasonic is the only company to show a prototype player so far, but based on a conversation with a representative from the Blu-ray Disc Association (read all the details here), we can probably count on 4K Blu-ray movies and players before this year is over.

Read how the new 2015 televisions are getting all new smart TV platforms.