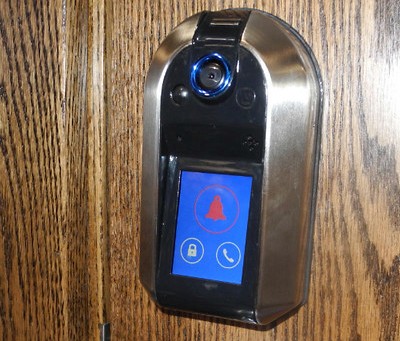 Westinghouse is in the house. The smart house. Westinghouse Security launched this week at CES 2015 with a Z-Wave home automation hub built into one of the smartest smart locks out there. Too smart, maybe, but we’ll get to that.

The new Westinghouse Security business is the old NextLock, which used to be Actuator Systems until it formed a partnership in 2013 with Strattec, which makes access control products for the automotive market. NextLock (Actuator Systems) already made commercial-oriented biometric door locks for the commercial market but demonstrated its first push into residential at CES 2014.

Last year at CES, NextLock showed a feature-rich smart lock in a form factor not suited to residential homes. The company “became” Westinghouse Security with rights to manufacture and market all security-related products – both commercial and residential – under the Westinghouse brand.

As Westinghouse Security, the new organization has delivered a much nicer-looking product with very similar specs as the original. Called Westinghouse Nucli, the product is more than a lock. It is actually a complete home automation hub featuring Z-Wave, BLE and Wi-Fi … and an open “SmartSync” API.

The API could be used to create an entire home automation system or features specific for the lock. Or the door lock’s motion sensor could trigger Z-Wave lights inside the home.

For example a programmer could write a facial-recognition application that could tell the user who is at the front door.

There will be a fee associated with cloud-based notifications and storage.

That’s a lot of features for a residential door lock. As such, it can sap the rechargeable battery pretty quickly, depending on how the unit is used.

The company says the product has a dedicated chip and algorithms for battery optimization, but it still provides only four to eight months of life. The battery, he says, can be charged in a mere two hours.

Just as interesting: the fob

Even as interesting as the door lock/hub is the SmartFob keyfob (SAL-SF500), which can be used for many purposes, not just as a door opener. I’d take a few of these as standard controllers for a Z-Wave home control system. It has a biometric and keypad reader with gesture/touch control.

Users can define what kind of swipe triggers what kind of event. It has always amazed me that standard garage door openers (for example) can be accessed by anyone with the garage remote. This device would require users to enter some kind of code or swipe their authorized fingertip.
There’s even a built-in OLED screen for configuring the device.

The Nucli is available for preorder at $299. The product will retail for $399 when it ships this quarter.

Early adopters receive one year of free technical support, two years of free access to the company’s cloud-based notification system, and free access to the API with sample code. [email protected] by January 31 to take advantage of the “early access program.”