This week I spent a day at the Harrison, NY headquarters of URC (the company formerly known as Universal Remote Control). I was invited, along with about 10 other tech journalists, to check out URC’s new Total Control system, a suite of home control products designed to integrate a home’s entertainment and other electronic systems into a simple, whole-house interface.

This isn’t URC’s first venture away from the traditional remote control business (they still do that, of course, and even showed me a new model, the R40, also called My Favorite Remote by URC’s Tech Support team leader Alice Webb). The company already had products on the market that reached beyond the home theater room experience, but the new system is a huge leap ahead of that.

Total Control, like control/automation solutions from companies such as Control4, Crestron, Savant and HAI, is designed to bring together the various system in your house, including audio, lighting, security and climate. The platform is positioned in the wide middle ground of the custom-installed control market. It’s not a DIY system, but it’s not tycoon-level Crestron either. The individual devices that run the system are fairly affordable, and since the software for programming the system is pretty simple, the overall costs should be within range of a lot of people who didn’t think they were ready for home automation.

Total Control’s heartwood is a home’s wired data network, and the company refers to the system as being “native to the network.” Essentially, everything gets connected via CAT5 wire. Sure, wireless is cool, but it’s really unreliable. Also, the system is all PoE (Power over Ethernet), which helps make installation easier.

The master controller is the MRX-10, a $699 slim, rack-mountable component that provides two-way communications to all the connected devices. The smarts of the system are in this unit, rather than in the individual remotes that users will use to activate their devices. Every TC installation needs one of these. URC’s Mitch Klein said there are no limits to the number of devices that can be controlled by the MRX-10. The system can be expanded into other rooms with an MRX-1 network base station that connects to that room equipment (TV, AV receiver, iPod dock…).

One of the coolest parts of the package is the SNP-1 streaming network player. This is essentially the network music device for accessing Pandora, vTuner, Rhapsody and a lot more. It can also access music stored on your PC or networked drives. This $599 device sends the music around the home through your network to TC amplifiers.

From there you go to multizone or single zone amplifiers which provide 50 watts per channel.

Beyond music and control of your home theater gear, TC can be connected to IP lighting control devices, security cameras and eventually climate control system. All of those systems will be connected to the home’s network and accessible through a variety of interface devices (those things we used to call remotes).

The interface devices URC showed us included the TRC-780 and the TRC-1280. The 780 looks like a basic wand-style remote, though it communicates with the TC system via radio frequency (so you don’t have to point it at anything), and it includes a 1.5-inch color OLED screen for many of the control buttons and macros. It also shows text feedback from music supplied by the network music player. The 1280 includes a 2.8-inch screen and Wi-Fi connectivity to the system. That large screen also makes for nicer graphics and can show things like album art and even weather conditions. There will also be various keypads and touchpanels as options. URC also indicated that support for smartphones and iDevices would be coming along. 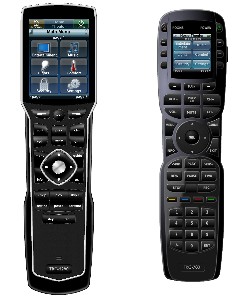 There are a few things about the interfaces I really like. First, you can easily switch between controlling one room to another. Say you’re in the living room and you want to switch on the pool lights and music. You can also link rooms temporarily so you can adjust all those devices in those rooms at once, rather than switching back and forth. The system programmer can build in unlimited macros and event timers to make your life a wee bit less complicated—in fact some macros are automatically created by the software, cutting down on the programmers’ time and allowing them more time to build in really innovative macros.

While controlling lights and AC units with a system like this is intriguing, it’s the music that will probably get most home owners going first. On that front, URC thinks it’s done something different by focusing not just on audio distribution, but also on audio quality. First, CAT5 distribution allows for uncompressed audio. Also, Total Control doesn’t buffer audio streams. I listened to the system played through some B&W floorstanding speakers and was very impressed.

After the system was thoroughly explained, URC put a TRC-1280 in my hand so I could play around. I found the interface to be very intuitive. With no coaching, I was able to select different rooms, link rooms and control a number of systems literally within 30 seconds of first trying it out.

URC says the products begin shipping Friday May 13 (Friday the 13th? Did no one notice that?), which means they’ll be in dealer hands probably next week. I expect to get a look at a real-life installed system in the near future.