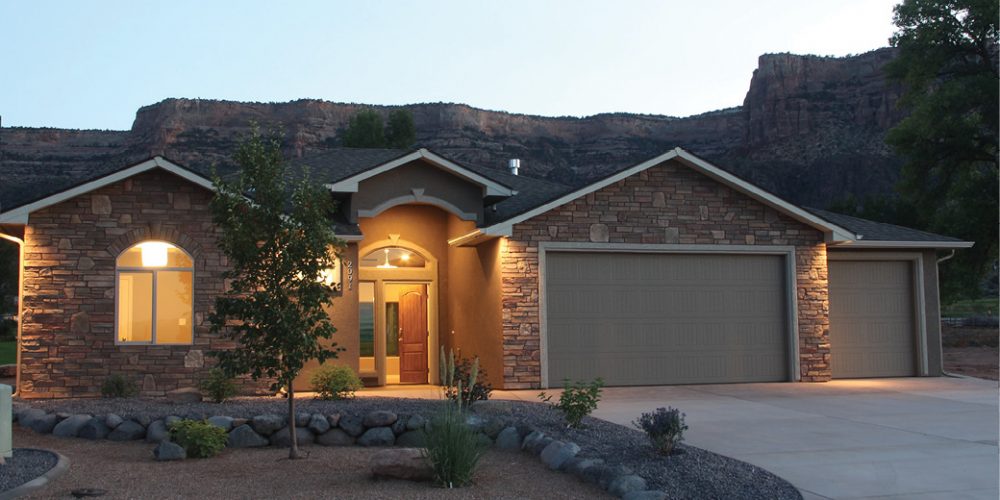 IN MOST HIGH-TECH HOMES, control over the lights, thermostats, A/V gear and other electronics is handled by touching something—be it a button on a keypad or an icon on a smartphone. It’s a convenient method of home management, certainly, but the owners of this 1,600-square-foot home in Grand Junction, Colo., have it even easier. Thanks to the clever implementation of 22 sophisticated motion sensors throughout the house, the owners never need to touch a thing to have the lights turn on and off and let the Control4 thermostat and Q-Motion motorized window shades set themselves appropriately.

“We have a knack and a personal passion for hands-free automation,” says custom electronics (CE) professional Eric Landis. He and his team of designers and installers at All Sound Designs, Grand Junction, Colo., collaborated with the builder to create a model home that would be able to self-adjust based on the comings and goings of its occupants. “The builder wanted to go out on a limb and create something unique that would set this house apart from others,” Landis explains. The plan worked: The house sold before it was finished or listed. “The technology wasn’t even fully operational yet, but the buyers loved the idea of adopting a hands-free lifestyle,” Landis says.

No ordinary motion sensors would suffice for tracking the whereabouts of the family members, though. All Sound Designs specified a more sophisticated type of sensor that could be mounted flush with the wall surface and that had 360-degree masking features. The latter allowed All Sound Designs to aim the sensors at very specific areas to preclude false triggering of the lights.

Extra sensing smarts were enabled by connecting the detectors to a Control4 automation system. The link allows the lights and other electronic devices to base their reactions not only on the presence of someone in a room, but also on the time of day, the availability of natural sunlight and other conditions. This “conditional logic” was programmed by All Sound Designs into the Control4 processor, which in addition to all on and all off commands, sends dimming instructions to the home’s LED fixtures. For example, during the evening the lights in occupied areas might set themselves to a 75 percent intensity level, while late at night pathway lights adjust to a mere 5 percent. In the morning, lights might brighten to a 50 percent level and then turn off automatically when there is enough available sunlight to adequately illuminate a space. “Turning the lights on at varying levels at different times of the day and shutting them back off when an area is vacant makes it possible to never press a button for weeks at a time and trust the system to keep the lights off to save power,” says Landis.

The sun also plays a role in the automation routines. If the sun is shining through a window, the shades in certain rooms lift to enable the room to harvest or reject the heat from the sunlight, depending on the season. As the sunlight warms the house, the thermostat adjusts to save energy—and bases its settings on whether someone is home or not.

The Control4 processor and its connected electronic devices receive home and away notifications from a DSC security system to enact other house-wide settings. When the owners disarm (home command) the DSC system, for example, the lights, thermostat and shades fall into their preset timer- and occupancy-based patterns; when the system is armed (away command), the timers and occupancy sensors are temporarily disabled. So the motorized shades in the bedroom might close automatically in the evening as someone walks into the room, but they only do so if the DSC security system is in an unarmed (home) state.

As effortless as a truly automated home can be, there are times when a manual form of command is helpful; for instance, when the homeowners would like to override the preset intensity levels of the lights. For this and other on-a-whim alterations, All Sound Designs mounted a Control4 keypad near the entrance to every room. In addition to operating the room lights and shades, the keypad features a built-in LED that serves as notification of the home’s security status. If all doors are shut (including the garage doors, which are programmed to close at 9 p.m. every night), the LED shines green. Then from the keypad, or from the Control4 mobile app on their iPad or smartphone, the owners can close and lock the doors and arm the security system, receiving a red indication light that the command was carried out. For extra assurance, video (live or recorded) from two Wirepath surveillance cameras mounted at the front and back doors can be viewed on an iPad or smartphone. Of course, the motion sensors and timers are always on duty, ready to help the homeowners see their way to the kitchen by illuminating a pathway or greet them in the morning by lifting the window shades.—LM EH

It’s tough to dedicate a special space to a theater in a home that measures 1,600 square feet, so the owners of this award-winning automated residence elected to integrate one into the family room. To save valuable floor space, the custom electronics (CE) professionals from All Sound Designs recessed three Definitive Technology speakers and subwoofer into the wall which holds a 70-inch Sharp TV, and they planted the remaining two speakers of the 5.1 surround-sound setup into the ceiling. All of the components, which include a Pioneer Elite A/V receiver, TiVo cable box, Panasonic Blu-ray player and Apple TV, are tucked away neatly in a mechanical room. The solution, says All Sound Designs’ Eric Landis, “makes the room feel much larger than it really is.”