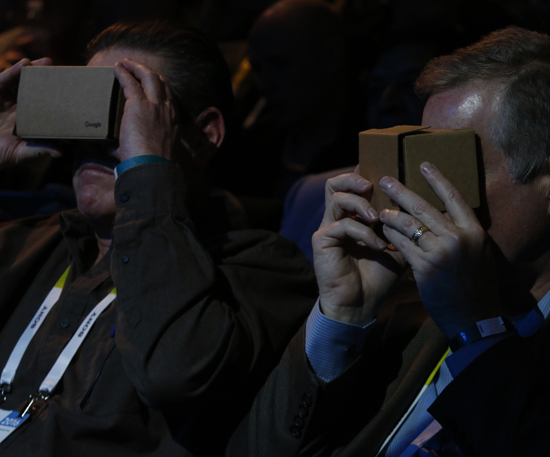 CES 2016: didn’t just give us a sneak peek into what products we can expect in: the upcoming year and beyond. (Come to me,: Laundroid!). It also gave us a glimpse into some of the top tech trends for 2016.

We’ve talked a lot about 4K and streaming media and those will continue to be hot topics. However, many of: this year’s top tech trends are really focused on the smart home. We’re seeing more easy solutions, more features, and more integration than ever before.

Wondering what the latest and greatest is going to be—and when you can expect to have it in your home? Let’s take a peek at five of the top tech trends to look out for in 2016.

Using the TV as a Smart Hub
We’ve seen a lot of ways to put smart technology into the home. Many home control systems, especially remote-controllable systems, use some type of smart hub to make the magic happen. Now, a few companies are looking to do away with the: little box you never know where to stuff.

Instead, we saw several manufacturers proclaiming that the TV will become the hub of the smart home. More specifically, Samsung just announced plans to include IoT (Internet of Things) technology on all of its 2016 SUHD TVs. This means that each of these 4K TVs can serve as a smart hub or controller for everything in the smart home. Well, everything that is compatible with SmartThings—which includes sensors, lights, locks, thermostats, and cameras.

LG Electronics also announced the new webOS 3.0 Smart TV platform, which will be included on all of the company’s 2016 Smart TVs. There are tons of interesting new perks included, but one that really catches our eye is a new IoTV app, which will allow users to control smart home appliances from LG and compatible manufacturers, all from the TV.

More Dolby Atmos for Everyone
Last year, we saw a flood of Dolby Atmos products for the home, including receivers and even speakers. This year, we’re already seeing more of the same. But what happens if you still don’t have room for all of those speakers?

This dilemma is why the: soundbar category has become so popular. Now, it’s what’s going to make Dolby Atmos-capable soundbars popular. Yamaha was the first to debut the YSP-5600, which can deliver the immersive goods, all without a receiver, preamp, and even extra speakers. Instead, this model uses Yamaha’s Digital Sound Projector technologies to produce a multi-dimensional listening experience. Priced at $1,699.95, this option is available now.

If you want a few of the extra speakers but are short on space, Samsung just introduced the first Dolby Atmos-capable soundbar “package.” The HW-K950 includes a slim soundbar, a pair of wireless Dolby Atmos-enabled rear speakers, and a wireless subwoofer.

DIY Cameras with Professional Monitoring
We absolutely love the ease and affordability of DIY home security cameras. If you’ve got an outlet and a WiFi network, you can have a security setup within minutes. The thing that isn’t so great is that this type of setup relies on you to do all of the surveillance. Yes, it’s nice to get an alert when someone breaks into your home. However, during the time it takes to fire up the app, make sure the alert wasn’t just a cat, and: call: the police, the: predators have had plenty of time to load up on your goodies and make a clean getaway.

So what’s a nervous homeowner to do? Add in professional monitoring. Recently, a few manufacturers of DIY home security systems have launched options for professional monitoring—and it’s kind of cool. Not only will it get you off the hook and give you peace of mind, but none of the options we’ve seen so far have any kind of binding contract.

Specifically, Lowe’s announced a partnership with United Central Control, Inc. (UCC), which will bring professional monitoring options to Iris system users. For a monthly fee, the service will send emergency personnel out in case of intrusion, smoke, carbon monoxide, and panic alarms. No long-term contract is required, but the service has a starting price of $19.99 per month.

Myfox hasn’t announced who will be doing the deed, but professional monitoring options will be available for the company’s stylish camera (which we reviewed) by the end of Q1. Services can be added or subtracted right through the Myfox app, all starting at $9.99 per month. This would be a convenient, affordable option for users who don’t want to pay the regular monthly fee, but want coverage during vacation months.

You Should Really Introduce Yourself to Echo
The Amazon Echo: has become a popular little: voice-controlled speaker. Soon, it will: become a major part of the smart home. Last year, companies were announcing all sorts of integration with Apple HomeKit and Google’s Brillo. This year was more of the same, but there were a lot of: companies echoing integration with the Echo—a real, actual product that’s been getting rave reviews.

However, it’s what’s inside the Echo that has companies interested: Alexa. This cloud-based, voice-activated platform could become the cornerstone of the smart home. It’s easy, it’s cheap, and Amazon has already initiated a program that makes it easy for companies to integrate. And companies are doing just that. To date, Alarm.com (pictured above), Belkin WeMo, Big Ass Fans, Ford, Insteon, LIFX, Philips Hue, Simple Control, SmartThings, Vivint, and others have added support or have made some type of integration announcement. Alexa: even: has its own IFTTT (“If This Then That”) channel, so you can create your own home automation “recipes.”

Water, Water Everywhere
We’ve seen a lot of automated sprinklers in the past. However, CES 2016 opened up the floodgates for new smart sprinklers, faucets, and: other ways we can save water at home.

However, one of our favorite smart water solutions won’t boost your green thumb to astronomical levels. Instead, the newly announced Hydrao will teach you how to save water (and money) indoors. It’s actually a smart showerhead that uses colored LED lights to let you know how much water is being used. It also has built-in Bluetooth and an iOS/Android app, so: you can set levels, tweak colors, and even track regular usage.