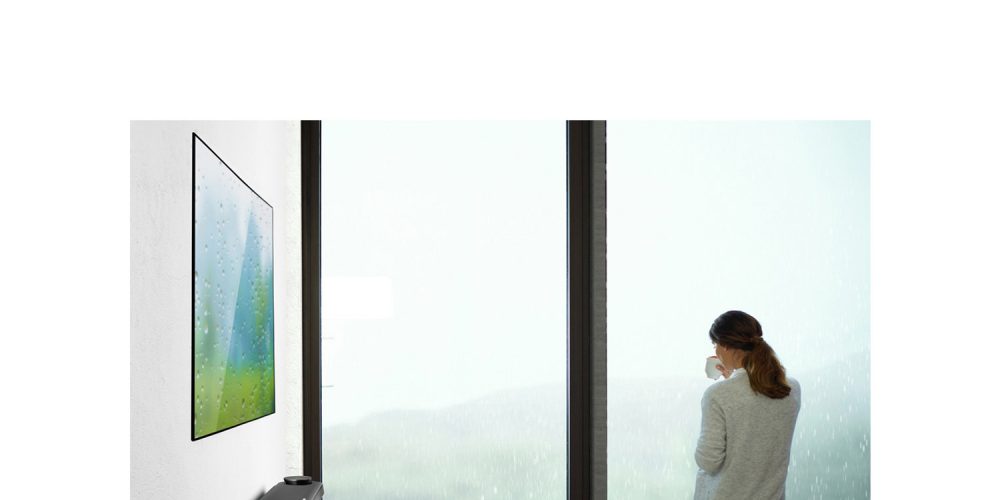 Thousands of products were introduced at the Consumer Electronic Show (CES) last week in Las Vegas, which makes it challenging to choose just 10 favorites. The innovations ran the gamut—from robots and kitchen appliances to A/V equipment and smart home devices that promise to profoundly alter how we manage and enjoy our homes. Now that all of the CES dust has cleared, here are 10 products and systems that left quite an impression. Many of these were received “Best of CES 2017” honors. 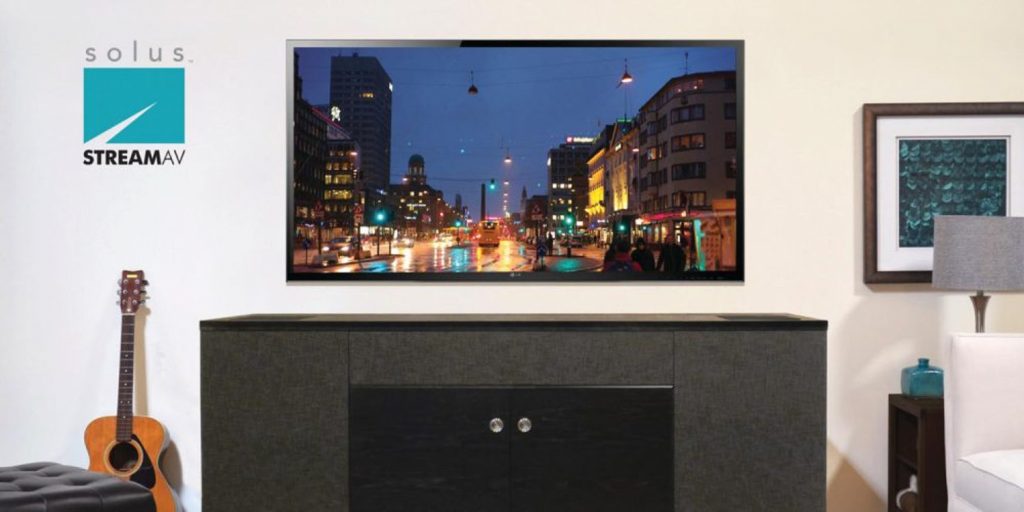 Yes, speakers are getting smaller and increasingly more attractive. And yes, there are options that allow you to tuck speakers into the walls and ceilings. Still, many homeowners find that it’s still difficult to meld a surround-sound system completely into the design and décor of their chosen media room.

Solus Audio at CES 2017 showcase a solution that integrates a complete 5.2 home theater speaker system into to an acoustically designed furniture cabinet that fits perfectly beneath any TV screen.

Measuring only 6’ wide, 19” deep, and 26” tall, the sleek modern cabinet takes up considerably less space than most A/V furniture. Yet, it will accommodate up to an 80” TV without any overhang for a clean aesthetic appearance. Yet, no speakers or gear is visible to the eye from its exterior.

The system retails for $5,999, and includes the amplifier from Solus for the built-in subwoofers, with availability in the second quarter, 2016. Several wood veneer finishes with multiple variations of coordinated grills covers are available. 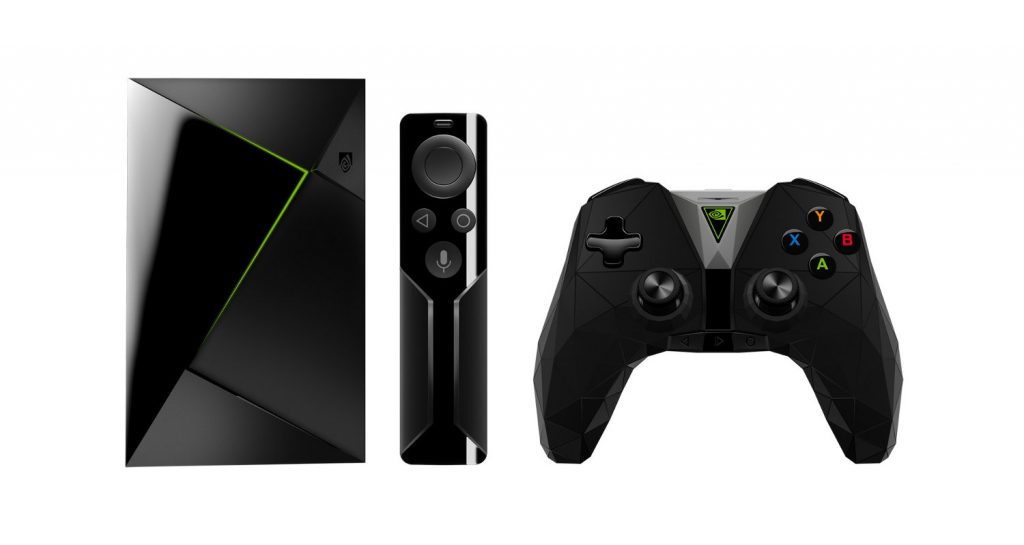 NVIDIA has managed to combine two of the hottest technologies into one device: 4K entertainment and voice control. The two come together in the company’s new SHIELD TV product, an advanced media streamer that in the coming months will be expanded with a series of artificial intelligence (AI) capabilities to transform your home entertainment experience.

For starters, Google Assistant will be integrated. This means that you’ll be able to pose a question verbally and have the answer appear on your TV screen – in addition to an audible reply. You will also be able to use voice commands to find content, pause, fast-forward, and rewind.

Also integrated will be SmartThings Hub technology, which will turn SHIELD into a smart home hub that can connect to hundreds of other smart home devices. NVIDIA SPOT, an AI mic accessory will enable those voice commands to be heard by SHIELD no matter where you are in the house.

The SmartThings and Google Assistant capabilities offer a unique twist to home entertainment, but at its core, SHIELD TV is an Android TV open-platform media streamer. It boasts 4K HDR quality, hallmark NVIDIA gaming performance, and broad access to media content. With the addition of Amazon Video in 4K HDR, SHIELD offers a large catalog of media in 4K – also supporting Netflix, YouTube, Google Play Movies(1) and VUDU. YouTube’s flagship TV app will also be available for SHIELD in the coming months, delivering immersive, 360-degree viewing experiences. It also features a wide range of gaming capabilities and rich assortment of game content. Its library of games has been expanded to thousands of titles, with the ability coming soon to stream Ubisoft’s catalog of hits, including Watch Dogs 2, Assassin’s Creed Syndicate, For Honor and countless others.

SHIELD TV is available for pre-order now and will ship in the United States, Canada and select European regions in January for $199.99, including controller and remote. The NVIDIA SPOT mic accessory for SHIELD will sell for $49.99. 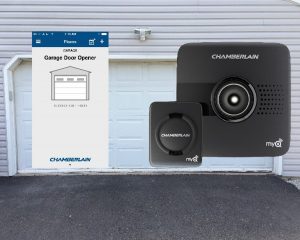 At CES 2017, Heath Zenith showcased a home surveillance system called notifi that’s completely inconspicuous. What looks like an ordinary LED light bulb – and actually is – combines a small camera that can visually monitor whatever requires surveillance.

Three versions of notifi are available, all of which can be remotely monitored via the notifi app on a user’s smartphone.

The notifi LED bulb, video doorbell system combines a camera and bulb, which can be adjustable up to 500 lumens. This wireless system’s camera is fully adjustable and features a 115-degree wide-angle camera which is activated by a 180-degree motion sensor. A doorbell and chime come with the system, too. Combined, the products retail for $179.99.

For $199.99, the bulb and camera are integrated within an attractive lantern. Again, a motion sensor activates the camera and the intensity of the bulb can be adjusted.

If you need a floodlight, notfi offers this as an option, too. A motion-activated security floodlight comes with the camera, and can be installed anywhere on the home’s exterior. It retails for $229.99. 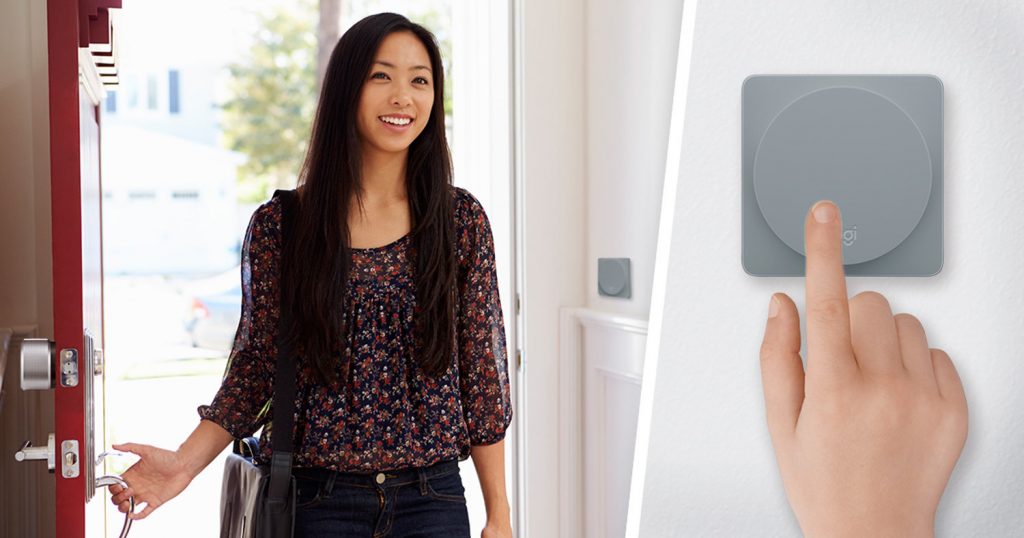 Sure, it’s easy to grab your smart phone and go to the door lock app to lock the front door as you’re settling into bed for the night. But what if you could just hit a button on the nightstand? On nights where you’re just too darn sleepy to even look at your phone, it’s a solution that’s probably the simplest around, and August Home introduces it at CES 2017 thanks to integration with the Logitech POP Home Switch.

Simple three-way control lets users press once, press twice, or press-and-hold to trigger different preset commands. Each switch is wireless and battery-powered, which means it can be used almost anywhere. 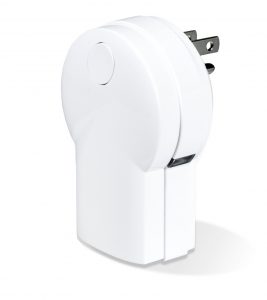 There is so much you can do with smart lighting systems: You can set scenes, create schedules, and use them to help protect your home. Thanks to technology integrated into Nortek Security & Control’s new line of lighting control systems, you can use the lights to monitor your household’s use of energy. The energy monitoring intelligence is built directly into Nortek’s GoControl 500 series of plug-in modules. Communicating with a Z-Wave home control hub, the modules can feed information on how much electricity each connected device is using. Integrated LEDs provide a visual representation of how much energy is being used so that users can make real-time adjustments.

The new GoControl 500 Series Wall Switches, meanwhile, have been designed to enact up to eight different lighting scenes based on how a user taps the switch. By double tapping, triple tapping, pressing and holding, pressing and releasing, and holding and releasing the top or bottom of the 500 Series switch, a user can trigger any of his or her created lighting scenes directly from the switch—no need to access a smartphone app or drill into a menu on a keypad or touchscreen.

All of the new GoControl 500 Series switches and modules sell for less than $60. 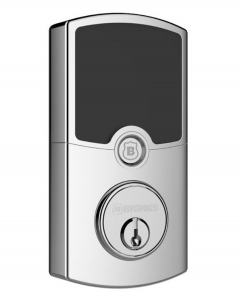 Changing batteries is a hassle, whether it’s for a remote control, a smoke alarm, or a smart door lock. To preclude the need to replace and discard batteries, Brink’s Home Security developed its ARRAY smart lock from Hampton Products International.

The patent-pending ARRAY Smart Lock is a cloud- and app-enabled internet of things (IoT) device that homeowners can use without adding separate hubs or accessories. ARRAY connects to the cloud using a home’s existing Wi-Fi router, and its advanced rechargeable power system with built-in solar panel eliminates the need to replace and discard batteries. It is compatible with iOS, Android, and Amazon Alexa-enabled devices.

For years, I’ve used a tennis ball dangling on string as a gauge for parking my car in the garage. It’s a solution that ensured that the front bumper didn’t hit anything in front and that it was far enough inside the garage to safely close the door. Granted, not a very elegant solution, which is why the Park-Daddy system launched at CES 2017 by Voxx Electronics speaks to me on a very personal level. As far as I know, it’s the first precision garage parking system designed for residential use.

The system comes with two infrared battery-powered head units that mount to the garage walls just inside the garage door opening by using pool off mounting tape. An RF Radio Receiver plugs into your car’s cigarette lighter power port. The Receiver will sound with an adjustable tone and a red LED light will illuminate when the infrared beams are broken.

As soon as your vehicle clears the garage door opening, the sound will stop and the LED light will change to green, notifying you that the car has been cleared and is safe to park. In addition to ensuring ample clearance for the front of your car, the Park-Daddy can also provide assistance to safely back up into your garage.

The Park-Daddy Single Car System and Two Car System will be available in February for $89 and $119 respectively. 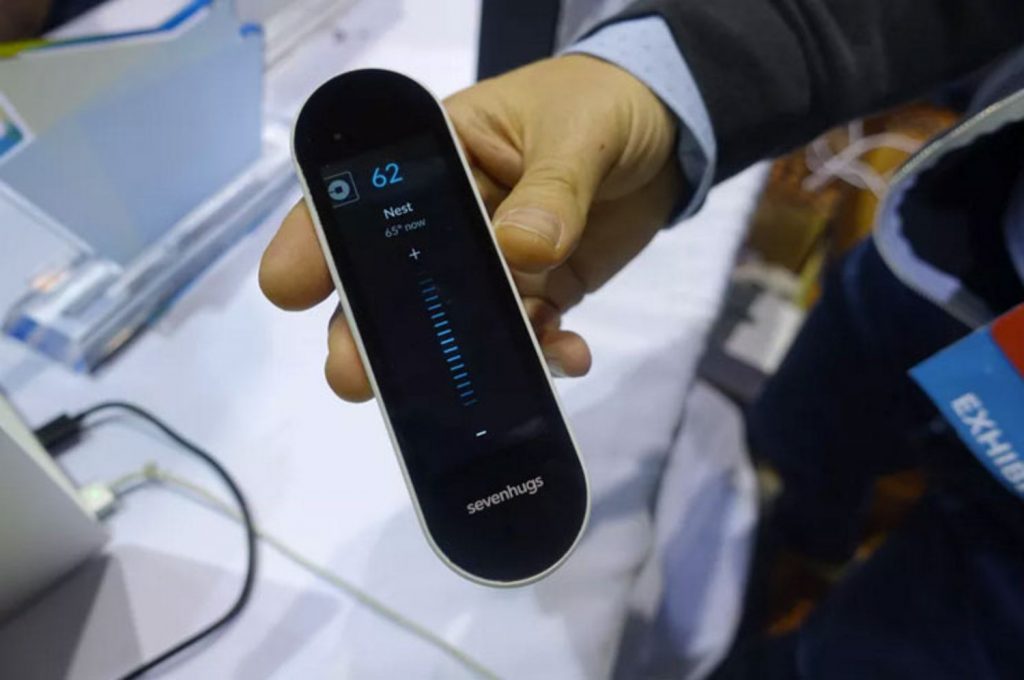 After showing a prototype of the device at CES 2016, Sevenhugs released its Smart Remote at CES 2017. Unlike other universal remote controls, the Smart Remote abandons static physical buttons for a touchscreen that can change to the correct custom control for whatever device it’s pointed at. Pointing it at a television will surface TV controls, while pointing at a lamp may bring up a slider for a Philips Hue bulb. If two objects are too close together, the Smart Remote offers an easy toggle to select the right one. 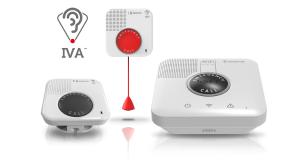 Sensors have continued to make incredible strides, becoming smarter and more versatile tools for home safety. At past CES events, we’ve seen sensors that can recognize the audible signatures of breaking glass, gunshots, and smoke alarms. Now Essence has implemented another listening twist. Its Voice Panic Detector reacts to, you guessed it, the panic in someone’s voice. Designed expressly for seniors, the VPD can trigger specific actions—like calling a prescribed list of loved ones–so that seniors get help in situations where they are unable to press a panic button. The VPD is one of many product that make up Essence’s WeR@Home home safety system, which is compatible with Z-Wave+, IFTTT, Nest, and other home management IoT solutions. 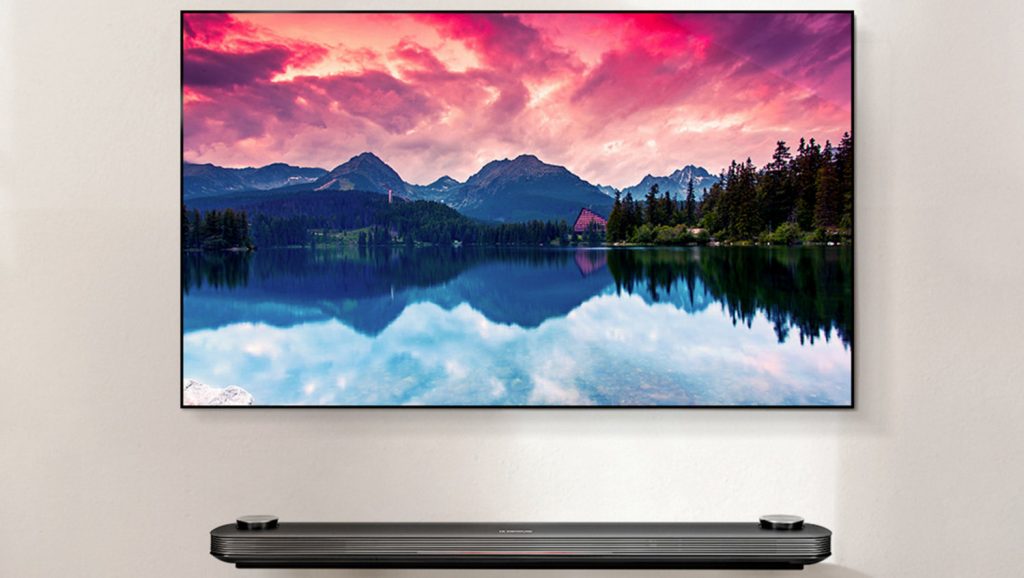 he LG Signature OLED TV W-series, otherwise known as the “Wallpaper TV” is engineered to be mounted directly to the wall, eliminating any gap between the wall and TV. It measures just 2.57 mm thick. The TV is available in 77- and 65- inch sizes. In addition to being the slimmest on the market, the W-series TVs are also the first to incorporate Dolby Atmos and Dolby Vision technologies. The TVs feature Active HDR for brighter images with better contrast.