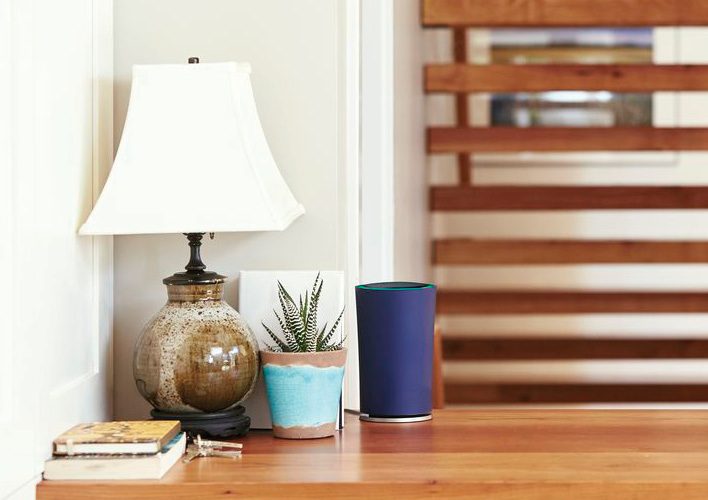 A SMART HOME IS ONLY AS SMART as its weakest link, and in many homes, the culprit is your home’s broadband router. The fact is, the router your Internet Service Provider supplied you with simply isn’t up for the task of directing the heavy streams of data that enable smart products and systems to perform at their peak levels. Imagine a command issued by your smartphone hitting a bottleneck during its wireless travel to your home’s security system. The traffic jam could render the system–and every product connected to it–temporarily inoperable. Not good. – From the Editor

There are a couple of tactics you can take to solve this problem: One, invest in a more robust, enterprise-grade router (Pakedge and Luxul are two leading roviders), and two, move your router out of the closet and into the open where it can provide better Wi-Fi coverage. The first fix-it is relatively easy. Any home systems integrator will be happy to set you up with a better, faster, higher-bandwidth router. The second antidote could be more difficult to swallow. It’s not the task of repositioning it that’s hard; it’s finding a router that looks good enough keep on kitchen counter, for example, where everyone can see it.

Here’s what home systems integrator Jordan Wills, of Cloud 9 Smarthome , New York, N.Y., had to say about fast but frumpy routers, and gave us his recommendations on more stylish yet still speedy alternatives:

When Wi-Fi routers bear names like the Netgear Nighthawk, clearly their designers seem to think that aerodynamics is a very important feature to tout. Add a spread of menacing antenna spikes to the device, and you’ve got something that certainly looks very fast. If it’s not modeled after a racecar or a weapon, it still comes: with 14 blinking lights, and you still keep pushing it as far back under and out of sight as possible. It’s a flawed design approach, because location matters when it comes to a router’s performance. Google knew this two years ago when it started designing its OnHub Wireless Router–a dramatic design departure from most other Wi-Fi routers on the market. (The OnHub is also available from ASUS and TP-Link).

It’s an obvious innovation, really. Make a router look better and people will be: willing to place in more prominently, therefore, giving them better Wi-Fi coverage. It takes more than a pretty face to beat out the competition, though, so OnHub packs 13 antennas beneath its minimalist footprint–12 paired up and angled: 120 degrees apart for optimal coverage at every angle, and one antenna to monitor for Wi-Fi congestion. OnHub lets you know how many devices are connected to your Wi-Fi signal at any time, and how much bandwidth each device is eating. From this information, you can prioritize bandwidth so the movie you’re streaming doesn’t have to compete against communications happening between other smart home devices. You can also run speed tests and learn when your bandwidth is dipping and peaking. The information is aggregated and displayed on the OnHub mobile app, which means you’ll never need to fidget with the router itself. Setup,retrieving your SSID and password, sharing that password with others, even rebooting the router is all done through the app. Plus, you can boost the Wi-Fi speed for a particular device by simply waving your hand over the top of the OnHub router

With backing by Google, the OnHub may grab much of the home router limelight, but there are many other attractive routers worth checking out (see sidebar above).: Figuring out where to put the device won’t be an issue; you can place it wherever is convenient and know that its high-tech capabilities won’t clash horribly with your home’s design.