Both easy home security and easy home automation are hot trends these days. What if you could combine them in the same product? In a sea of new “smart surveillance” products, the Wi-Fi-enabled Piper from Blacksumac appears to be the smartest to date – with a useful fisheye lens and digital pan/zoom feature, multiple on-board security and environmental sensors, Z-Wave for home automation, and what appears to be a decent back-end for cloud-based home monitoring and control.

Piper is now available for pre-order on Indiegogo, starting at $189 for the early birds, but the Canadian company says the target retail price for the self-contained security and home automation device is about $230.

At that price, Piper is just $30 more than the crowdfunding success story Canary – a similar product but with no home automation and no support for bells and whistles to create a richer experience.

With Canary, for example, the only thing you can have the smart camera do is sound a siren. With Piper, you can do that and flash the lights and open up a dialog with a would-be intruder.

Piper, about the size of a Guinness, mounts on the wall or sits freely on a shelf. Users set HOME, AWAY and VACATION rules and Piper does the rest. The if/then programming interface seems elegant and simple.

Even without the home automation features, the self-contained system is pretty slick. If you desire (via your self-configured rules), Piper can be set to record video when motion is detected, and send you an alert with the video attached.

Since video is constantly being captured on the unit’s flash memory, it can store images from some time before an event occurred (motion sensed) until a set amount of time after the event. As long as your home network and Internet connection are alive, the video is stored in the cloud as well.

The video itself is smart. Each camera (up to five in a system) can present four views – simultaneously in a quad layout or individually per your command. The fisheye view captures the whole area (180 degrees up/down, left/right). The other three views are digitally zoomed in to different areas in the space.

Upon an alarm, you (and/or your proxies) will receive a notice and can decide to peek in, sound the siren (if that’s not the default), or establish a dialog with the intruder via the unit’s built-in mic and speaker.

The motion sensor can be adjusted for sensitivity and viewing angle. For example, if you have a pet, you might set Piper to be less sensitive to smaller objects.

The audio detection is intelligent as well.

Blacksumac is “tying into a number of databases for smart sound detection for things such as smoke alarms and barking dogs,” says president and co-founder Russell Ure. “There will be tuning as we go forward.”

Likewise, Blacksumac will link to other potentially synergistic data providers such as the NOAA which could “tell you a storm is coming if your balcony door is open,” Ure says.

Beyond its PIR motion detector, Piper also has sensors for temperature, humidity and ambient light.

Now, Throw in Some Home Automation

But that’s not all. Packed into Piper is a Z-Wave controller that not only lets you monitor your home, but take action as well (I was troubled that Canary has no such capability).

In the weather example above, you might not be able to shut your window remotely upon a storm warning but at least you can get the warning. That’s because you can add Z-Wave sensors to doors, windows and other places in the home (for motion, freeze detection, flooding, whatever).

What you can do is adjust a Z-Wave thermostat remotely if you realize you left a window open, or if you want to set it back for energy-saving purposes. 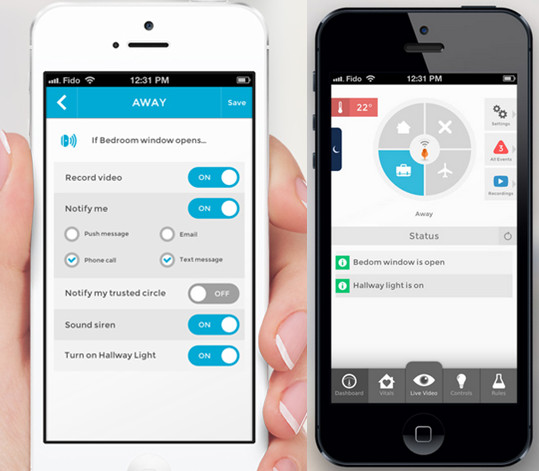 Likewise, you can flash the lights if motion is detected while you’re away or, or lock your Z-Wave door locks.

Ure suggests that single residents who are coming home to an empty house might want to scope out the place before they enter. Simply use the Piper Android or iOS app to access the cameras and turn on the lights to ensure no monsters await.

“Pairing Z-Wave is really simple,” Ure says. “Just add a sensor, press the button on the Z-Wave device and tell Piper what it is, like a front door sensor. The security rules are adjusted automatically.”

In addition to the standard Piper system, Blacksumac is coming out with a cellular-enabled product for back-up services if your Internet should go down.

There is no monthly fee for Piper, except for video storage in the cloud, Ure says.

Initially, the company plans to sell directly to consumers but “we’ll have packaging for retail,” Ure says.