Technology that Stands Out - Electronic House ​​ 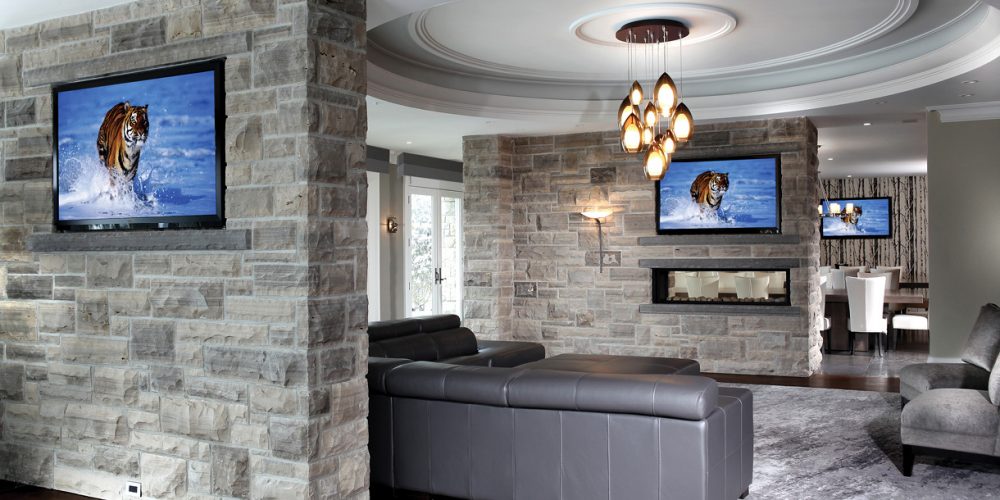 WHILE HIDING TECHNOLOGY is currently the trend in homes, it wasn’t so long ago that showing it off was de rigueur. “A little over a decade ago, the trend was that people who could afford technology preferred to show it off. They weren’t modest about being ostentatious,” says Mark Hernandez of New York City-based electronics integration firm Cliqk. Yet despite trends, some electronics gear features such incredible industrial design that hiding it would be sinful.

“Our customers want us to hide all of the equipment. But as far as speakers go, it’s a 50/50 split on whether they want to see them or not,” says Nick Tzortzatos, managing director of Home Theater of Long Island.

Like hidden gear, however, there are several pros and cons that deserve careful consideration before you choose to prominently display your home’s electronic components.

Pro: Portability
One of the biggest benefits of using freestanding gear is that it can go where you go. “A lot of homeowners are concerned about making a significant investment in their speakers and then moving to a new home,” says Tzortzatos. “They want to be able to take the speakers with them without having to repair walls.” By using freestanding A/V equipment that doesn’t belong to the structure of the home, you sidestep this issue altogether.

Con: Wiring Eyesores
Simply put, if the gear isn’t part of the structure of the home, or at least mounted on the ceiling or the walls, you’ll have to deal with the associated wires. Not a huge issue for a TV, which you could simply place on top of an A/V cabinet and run wire behind or through the furniture. But for a full surround-sound system, you’ll have to address, and hopefully conceal, speaker wires.

Pro: Easier Placement and Installation
With hidden equipment, often the structural elements of the home will dictate the placement of the technology. Take, for example, a great room with lofty ceilings. In-ceiling speakers might not be possible, and the room might be so spacious that speakers planted on the back wall aren’t close enough to the seating area to effectively transmit rear-channel surround action. Freestanding speakers, on the other hand, are not tethered to walls, making them easier to put behind a couch or stash on a bookshelf. “You can definitely run into some issues on desired placement with hidden gear,” says Tzortzatos. “Homeowners don’t like to hear that you have to notch a beam in the ceiling to get the speaker to fit. Depending on its final location, hidden gear can also compromise the overall sound and desired outcome.”

Con: Aesthetics Have to be On Point
When you choose to leave your gear exposed, it needs to not only look good on its own, but mesh with style of the room. “It’s extremely important to take into account the aesthetics of the room. You’re not only recommending the best sound for the room, but the technology also has to look good and match the particular design,” says Tzortzatos. He also points out that while boldly displayed technology can make a design statement, that statement may eventually get old.

Pro: Sounds Great
Generally speaking, freestanding speakers sound better than in-wall models because the speaker designers can control the outcome better with a fixed shape and materials. With in-wall speakers, the wall becomes part of the speaker shell, which introduces an element of unpredictability into the mix.

Con: Vulnerability
Gear that is exposed is inherently vulnerable. A TV on a stand or a freestanding speaker that isn’t secured might fall down and break or, worse, hurt someone. — KR

Beautifully Designed Speakers—Some speakers are so beautifully designed, they deserve to be left out in the open for all to admire. Many manufacturers offer customization services, so you can pick a color that complements the room.

Stunning Controls—The dimmer switches that control your home’s lights—as well as other types of wall-mounted keypads—have gone through years of style refinement. Featuring architecturally pleasing slider bars and available a rainbow of color choices, they are both eye-catching and functional. (right, Lutron dimmer switch)

TVs with High Style—The days of mounting a basic black rectangle to the wall are long gone. Today you can find TVs featuring fabulous industrial designs that are meant to show off—and you don’t even have to turn it on. (right, Bang & Olufsen TV)

Acoustical Art—Acoustical wall paneling is often added to home theaters and other spaces to make music systems sound better. Panels can be ordered in interesting sizes, shapes and colors to resemble a piece of modern art. Another option is to request that photos or paintings be screen–printed on the fabric surface of the panels.