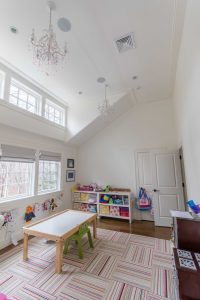 Busy households with kids and pets are prime candidates for home automation systems. Families simply need help managing their homes when schedules are hectic and quality family time is in short supply. The owners of this award-winning project of the Electronic House Homes of the Year contest were no exception, and called on Elite Media Solutions, of Wellesley Hills, Mass., to engineer and design a home system that could simplify their lifestyle in a way that would enable them to carve out more free time. Additionally, the homeowners wanted a system that would afford them greater peace of mind and home protection—especially for their children.

Elite Media Solutions tied the home’s lights, thermostats, audio equipment, and surveillance cameras to a Savant home control platform, and loaded the Savant mobile app onto the owners’ iPads, some of which are mounted to the walls, and smartphones. Several scenes were created to minimize the amount of work it would normally take to close up and lock down the house for the night. Tapping a single button on the app, for example, triggers a housewide “All Off” command. Lights turn off, the thermostats adjust, the audio system turns deactivates, and the surveillance cameras maintain their vigil over the home and property. The app also enables the iPads and smartphones to function as intercoms. When the doorbell of the Mobotix door station is pressed, an image captured by the nearest surveillance cameras is passed to the app (as well as to the screen of any TV that’s on), and the owners can converse with the guest directly from the app. Similarly, if any family member hears a noise in the middle of the night, he or she can turn on all the outdoor lights via that Savant app.

Entertainment Goes to the Dogs

The technology incorporated into the house isn’t just about making the house more manageable and free time more accessible; it also makes living there more enjoyable. From the same control device that’s used to set the lights, thermostats, and security devices for bedtime and other routines, the family can access its music library and direct songs to any of several independent music zones. Each member of the family has the ability to listen to something different—important for a family whose members each have their own distinct taste in music.

Even the family dog, Murphy, is privy to the entertainment, and finds comfort in it when he’s home alone. Per the request of the family, Elite Media Solutions created a special setting in the Savant system, called “Away” that on command from a Savant app on their smartphones turns on specific lights throughout the house and activates a musical playlist for Murphy while they are gone. The lights and music pair up for family event, too, adjusting at the tap of a button for waking up, going to sleep and having dinner with guests.

Also family friendly are the favorite station presets Elite Media Solutions put together for each member of the family. For example, when one of the kids turns on a TV (there are six total), she is presented on the screen of an iPad a list of favorite stations available in the Kids TV preset. The setup reduces time spent searching for a specific program as well as confusion on how to control such a robust entertainment system. Thanks to conscientious programming and installation of the Savant system and its connected subsystems, and a thorough understanding of its clients’ needs by Elite Media Solutions, juggling busy schedules and a sophisticated home has never been easier for the family who lives in this award-winning home.