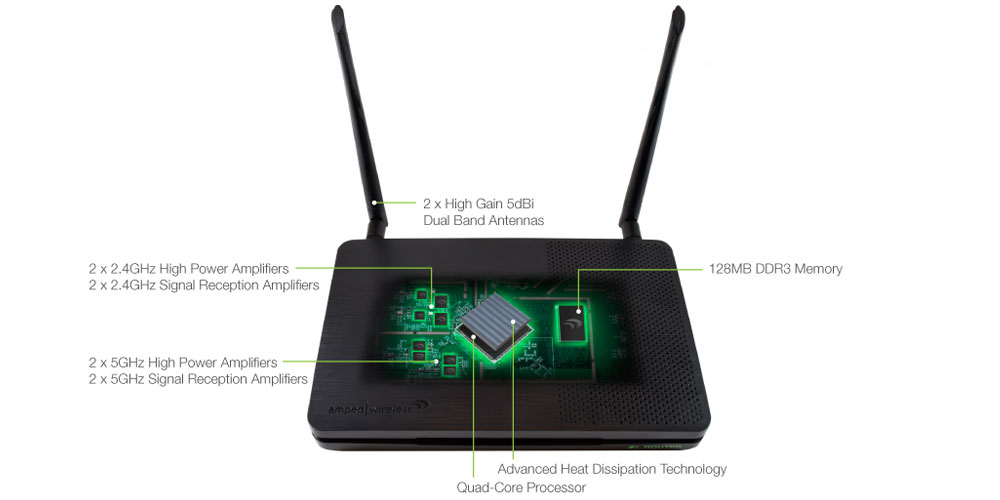 Back in the days of Compuserve and AOL a home had a single desktop computer connected to a modem and that was enough Internet connectivity to hear “you’ve got mail.”
Today homeowners have multiple devices ranging from smart phones and tablets, to laptop computers and smart TVs, and these devices, along with wireless music systems, home control and security solutions, all require robust and reliable connectivity way beyond the means of “you’ve got mail.”

“Every home is being flooded with Wi-Fi devices. Tablets, televisions, gaming systems and smart phones are staples in the everyday household and those are just the beginning,” says Lacey Limbrick, brand and marketing manager, Amped Wireless. “The Wi-Fi hardware has to keep up with this demand and that is exactly what the ARTEMIS does. It is ready for the average home’s demand right now and for what is to come in the future. Not to mention [that] it is also very affordable.”

Amped Wireless says the ARTEMIS router incorporates eight high-power amplifiers, along with two high-gain antennas, and a Quad-Core ARM processor. This architecture enables the router to cover a wide range with speeds up to 339Mbps on the 2.4GHz spectrum and 867MHz on the 5GHz spectrum. Augmenting the connectivity of the router Amped Wireless points out the ARTEMIS incorporates next-generation wave 2 AC MU-MIMO technologies that help the router maintain speeds when multiple devices are connected.

These combined technologies enable the router to support a variety of simultaneous activities, including music downloads, 4K video streaming, gaming and traditional networking traffic without a drop-off in performance.
In addition to its wireless capabilities the ARTEMIS High Power AC1300 Wi-Fi Router with MU-MIMO also includes five gigabit ports and a USB port to support other connections and networking functions.

The ARTEMIS High Power AC1300 Wi-Fi Router with MU-MIMO from Amped Wireless is available at a price of $130.