Matrix Can Deliver Up to 32K Sensor Combinations - Electronic House ​​ 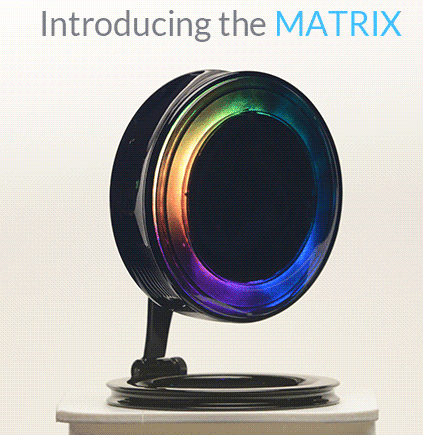 If you could smush all of your smart home gadgets into one, would you do it? AdMobilize is hoping you’ll say yes and back the Matrix.

The Matrix packs all of the smart home gadgets your Electronic House would ever need into one teeny-tiny product. Seriously—the product measures a mere 4 inches in diameter, which includes an LED light ring called the “everloop.”

Despite the small size, the Matrix features a camera, microphone, and speakers, along with temperature, light, and humidity sensors, plus a gyroscope, altimeter, barometer, and more. It even boasts proprietary computer vision technology, including facial and gesture recognition with analytics to detect emotion, gender, and age.

Parent company AdMobilize says that the Matrix combines an operating system and several smart home gadgets into one, similar to how the smartphone consolidated the camera, calculator, computer, clock, flashlight, and more. It runs on 802.11 a/b/g/n WiFi, CDMA, and GSM 3G.

With all of this functionality, it’s obviously designed to be the hub of your home. However, like all good hubs, the Matrix doesn’t like to work totally alone. You need to download apps, which work in conjunction with the sensors to create an endless number of smart home applications. Okay, according to AdMobilize, you can actually get about 32,000 sensor combinations.

Out of the box, the Matrix has three apps to get you started. Those apps and new additions can be accessed using voice commands or the web-based dashboard. The device can even respond back using a voice confirmation or visual signals on the LED light ring.

“One of the biggest challenges with the skyrocketing growth in IoT and smart home technologies is that nothing talks to each other—it’s one device to one application,” said Rodolfo Saccoman, CEO of AdMobilize, the company behind Matrix. “That’s a problem because it means lots of clutter for consumers, which egates the simplicity that smart home is all about. It also forces developers to start from scratch in building new devices and apps, which costs millions of dollars and takes years, creating a huge barrier to entry, delaying time-to-market and access for consumers.”

AdMobilize is currently seeking $100,000 to fund the Matrix by running a Kickstarter campaign. If you pledge $199 by Thursday, December 10, 2015, you will get one Matrix. A second device can be added for the package price of $498.

It’s definitely an interesting concept, but I think it will all come down to apps and partnerships—and those things aren’t really clear just yet. After all, most smart home users already have devices in place and others may not be willing to take a leap on a Kickstarter campaign, or wait until the May 2016 delivery date.