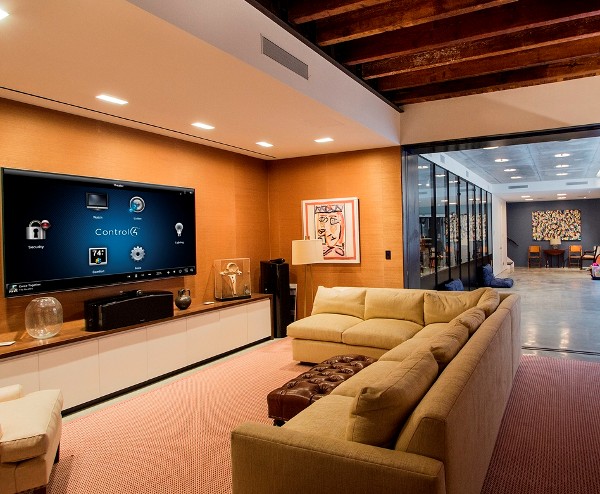 OWNING AN IMPORTANT PIECE OF HISTORY brings with it a unique set of responsibilities. Be it a coin handed down from your great-great-grandfather, a book autographed by a literary icon, or an approximately 6,000-square-foot structure on New York City’s Upper East Side with a prolific past life, preservation is paramount. The owners of this award-winning Before and After project, with the help of local home automation systems integrators from Cloud9 Smarthome, of New York City, were able to turn a Manhattan relic into a comfortable, automated home for a family of four, while maintaining the integrity of the building’s original design and architecture.

Finding this balance was no easy feat, says Jordan Wills, Cloud9 marketing director, as there was nothing remotely residential about the building’s past life. Constructed and used originally as a fire patrol house in 1879, it later functioned as the headquarters of the American Alpine Club. For its third incarnation in the 1990s, art dealer Alan Stone transformed it into a trendy art gallery. When Stone put the property on the market in 2011, its current owners jumped at the chance to turn the NYC artifact into the home of their dreams.

It would take two years to renovate the minimalist art gallery into a place with all the creature comforts of home, including a bounty of modern technology, all without compromising its original charm. Because lighting can have a huge impact on a home’s architecture and atmosphere, the owners felt the fixtures were the obvious place to begin the makeover, which would involve swapping the commercial-style gallery lights for recessed fixtures, sconces, and table lamps more befitting of a residential setting.

As the new lights were being wired up by the electrician, the homeowners were presented with two options for controlling them: stick with the standard toggle-style wall switches already in place or upgrade to smart dimmers and keypads. Following the advice of Cloud9, the owners wisely chose the latter option. This arrangement would allow one sleek Control4 home automation keypad to do the job of what would have required a bank of multiple individual wall switches; even better, the decorator-style keypads would allow the homeowners to evoke a variety of different lighting scenes to play up their home’s unique architecture with just one tap of a button. Also appealing to the family were the convenience features of the automated lighting. They would be able to turn on or off every light in the house, for example, by touching a single button on a keypad. “We mounted a keypad at each exterior door specifically for this purpose,” Wills says. “As they’re walking out the door they can tap one button to turn off all the lights in the house, and when they return, tap another to light up the foyer and kitchen.”

Tomes and Technology Collide
A total of 11 independent listening zones in this home are privy to the songs from the streaming music service Rhapsody. Access to the service, as well as to other online music services, is provided by the Control4 home automation system that was installed by the home systems integrators at Cloud9 Smarthome, of New York City. It’s a convenient setup that not only blankets the property with amazing audio and reintroduced the homeowners to the joy of music listening, but is what ultimately inspired them to take their audio enjoyment up a notch by transforming a library into a dedicated, two-channel listening room. Here, digital music is ditched for the high-fidelity analog audio of yesteryear.

Also high on the homeowners’ wish list was a family-friendly home theater. With the owners’ blessing, Cloud9 confiscated an unfinished portion of the basement to transform it into a spectacular media space, complete with an 80-inch Sharp LED TV and a 5.1 surround-sound arrangement comprised of Bowers & Wilkins speakers and two Sonance subwoofers.

There was no need to go hog-wild with video components, says Wills, as the homeowners felt that an Apple TV, Blu-ray Disc player, and cable box would provide them with more than enough content to enjoy. Wills states that Cloud9 often chooses AppleTV as the sole source of video for its clients. In fact, for this project Cloud9 outfitted each of the home’s six remaining flat-panel TVs with its own local AppleTV box. “This ended up being a less expensive setup than installing a system that would distribute content from a centralized rack of equipment to each viewing area,” Wills says.

Although Control4 keypads work well in the majority of the house, Cloud9 elected to mount a Control4 touchpanel to control the environment of the home theater. This 7-inch screen presents a complete view of the family’s entertainment options which, in addition to Apple TV programming, shows them a list of music stations on Rhapsody. A few seconds of paging through the options at the touchpanel, and the homeowners are able to stream their choice of music to the home theater speakers, as well as to other speakers in the house. If they’d rather watch a movie, a touch of an icon on the screen preps the A/V equipment and the lights as the family takes their seats. For control from the couch—adjusting the volume, skipping to a new station, etc.—the family uses a custom-programmed handheld Control4 remote.

And there’s no need to leave the theater to know what’s happening around the property, which includes a courtyard and detached carriage house. The owners can visit the touchpanel to view surveillance cameras and control the lights in these areas. The Control4 system carries through with the commands without a hitch, accentuating rather than competing with the home’s roots as a historical NYC icon.