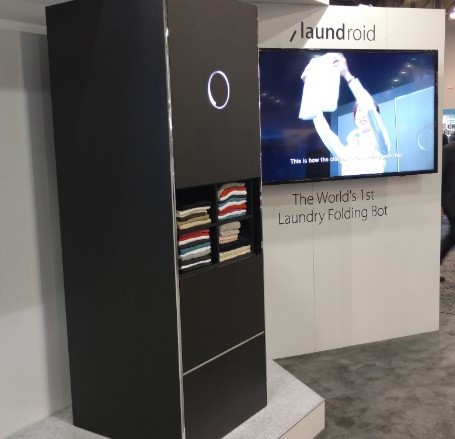 At CES 2016, there were a lot of appliances promising to make daily lives easier. One was Seven Dreamers Laboratories Inc.’s Laundroid, a laundry-folding robot that appeared as a mysterious black box reminiscent of HAL 9000.

According to Seven Dreamers, the average person spends 18,000 hours (about one year) in his or her lifetime doing laundry. Laundroid takes unsorted clothing from a hamper and puts them into neatly folded piles.

Inside Laundroid’s curious cabinet are two robotic arms, which pull items of clothing from a drawer beneath the robot and hold them up so a camera can distinguish between, say, a T-shirt and a blouse. They then fold the clothing according to a preset pattern, said a representative for Seven Dreamers, which has U.S. offices in Redwood Shores, Calif.

Laundroid’s image-recognition system and robotic arms currently take 3: to 10 minutes to pick and fold each item, or overnight for a load of laundry.

The prototype robot’s method for quickly and quietly folding clothing in a relatively small box is proprietary, said the spokesman. Laundroid, which was first displayed last year at Japan’s Combined Exhibition of Advanced Technologies (CEATEC), has been in development for 10 years, he said.

We asked whether institutions such as hotels and hospitals might have more need for a laundry-folding robot, but the Seven Dreamers spokesman said that the company has designed Laundroid for households. No price has been revealed yet.

Seven Dreamers has entered production with Panasonic Corp. and Daiwa House Co. and is taking preorders. The company expects to begin taking pre-orders for Laundroid by 2017, and it plans to team up with Panasonic to combine the robot with a washer and dryer by 2019.

By 2020, Laundroid could even put clothes back in a closet, the spokesman said.

Tokyo-based Seven Dreamers, which has its roots in Super Resin Inc. in 1957 and was established in 2014, said it wants to be “the world’s No. 1 technology company.” It has worked on the Hayabusa asteroid spacecraft, and its other products include a custom carbon golf shaft and the Nastent nasal stent.

Researchers at the EU’s Clothing Perception and Manipulation project, the University of California, Berkeley, and FoldiMate Inc. are among those also working on laundry-folding robots. Manipulating a variety of soft objects has been a challenge, but robots could soon relieve us of that chore—for a price.