Inside OUT - Electronic House ​​ 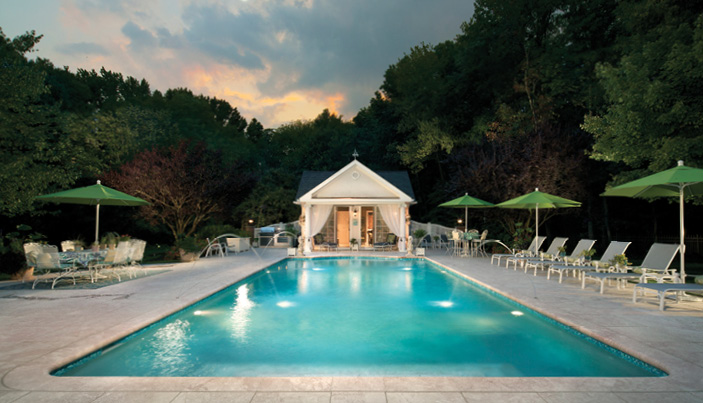 An expansive renovation of the outdoor space included the addition of automated swimming pool fea- tures, several surveillance cameras and motorized mosquito screens, all of which can be accessed and controlled via a Savant mobile app on an iPad or iPhone.

THE OWNERS OF THIS 14,000-SQUARE-FOOT HOME in New Jersey were already investing time and money to update the electronic systems inside their home; so why not also add technology to the back yard as it underwent a massive renovation, they thought. “They entertain a lot and wanted the same casual, comfortable party atmosphere outside as the house would have inside,” says custom electronics (CE) professional David Devanna, from Electronics Design Group (EDG), Piscataway, N.J.

Naturally, EDG would install a weather-hardy TV and outdoor-rated speakers to the new, revamped exterior spaces, which would include a fully functional kitchen, a covered bar and seating area, and several patios and decks. A swimming pool, hot tub and fountains were already in place and in good condition, but even they were tweaked to take this outdoor living space to a whole new level of enjoyment.

End to a Networking Nightmare

With so many commands zipping around the inside and now the outside of this house, a solid, reliable wireless network was an absolute must. But not any old network equipment would suffice, as the homeowners and custom electronics (CE) professionals at EDG quickly discovered. “As soon as we installed the surveillance cameras they crashed the network,” says EDG’s David Devanna. When this happens, control over the lights, A/V components, fountains and swimming pool via an app on a tablet or smartphone is rendered nearly impossible. For this reason, EDG swapped the home’s existing networking equipment for enterprise-grade routers and wireless access points (including one for the outdoor area) from Linksys and Ruckus. It’s a fairly simple update that makes a huge difference in the performance of a home control system.

Although the architectural and landscaping redesign had a lot to do with the new vibe in the back yard, credit also goes to the seamless integration of a Savant home control system, which was handled by the pros at EDG. It’s the addition of this technology that affords the owners the luxury of controlling all of the lights, music, video, security devices and water features with nothing more than a couple of finger taps on an iPad.

For example, while lounging at the pool, the homeowners can use an iPad to choose a piece of music to play through all or just some of the dozen-or-so speakers sprinkled throughout the outdoor area. EDG strategically positioned them throughout the yard so that an afternoon playlist wouldn’t disturb the neighbors. Through a Savant mobile app, the owners can peruse songs available to them from a rack of audio components stored in an equipment room inside the house. They can control the volume, skip to a new station or source and kick-start the fountains for some additional ambiance. It’s just as easy to control the landscape lighting during evening gatherings. Or, the owners can let the Lutron lighting system’s built-in astronomical timeclock turn the lights on automatically at dusk, and then off in the morning.

Video is piped to a 50-inch outdoor-rated Pantel TV in a similar manner: The owner taps a few icons on the iPad and in seconds a movie pops onto the set from a well-stocked Kaleidescape media server. “They watch so many movies outside that we connected the outdoor TV to its own Kaleidescape unit,” says Devanna. “The TVs in the house share a second server.”

No matter how engrossed in a flick the family might be or relaxed on the mosquito-proof deck (motorized screens can be lowered via an iPad command), the Savant system keeps the homeowners apprised of what’s happening elsewhere on the property. For example, when incoming visitors press a button on a Viking intercom station by the front gate, the Savant system temporarily mutes the music and emits a chime through every speaker on the property. This is the owners’ cue to grab an iPad. On its screen they can see an image of the visitor captured by an IC Realtime camera that’s perched on a pedestal at the gate. The owners can touch a button to unlock and swing open the gate. Additional surveillance cameras planted around the exterior are used mostly when the owners are inside and want to monitor the whereabouts of their pair of Westie Terriers. Shots from all 16 cameras can be brought up at once on the screen of an iPad.

Controlling each element of this made-over back yard couldn’t be easier, but still the owners felt comfortable putting the Savant system in complete charge of some of the features. “They wanted the exterior of the house—the back yard and the front yard—to look their best at certain times of the day, whether they were home or not,” Devanna explains. “So we programmed the Savant system to activate the fountains and lights automatically throughout the day.” Consider it curb appeal with a high-tech twist.—LM EH