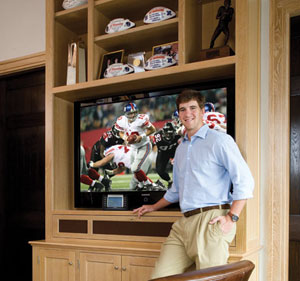 In Eli Manning’s day job as quarterback for the Super Bowl champion New York Giants, control is an elusive thing. He calls the plays, but blocks can be missed, handoffs can be muffed and 300-pound linemen can disrupt his plans.

Being at home is a much more accommodating experience for the Super Bowl MVP. He and wife Abby have complete control over all their home electronics systems;the motorized shades, the lighting schemes, the multiroom audio, even the stealth motorized pillar that unveils the top-shelf bar selections’at the press of a button.

Total home control, or automation, was Eli’s overwhelming priority when the Mannings recently gutted and renovated their 3,000-square-foot Hoboken, NJ, condo, with spectacular views of Manhattan.

Truth be told, the 27-year-old quarterback isn’t a high-tech guy. He’s also not ostentatious; you won’t be seeing him on Cribs anytime soon.

There was no grand plan, no goal to create an awe-inspiring home theater, no motivation to have his home electronics setup trump that of his teammates or even older brother Peyton Manning, the Indianapolis Colts’ own Super Bowl MVP. “No, none of that. And Peyton’s house is pretty simple,” Eli says. “I just knew I wanted to be able to play music in every room and easily select the music I wanted to play, but I was kind of naive about how it would work—how simple or complicated it would be.”

Other priorities for the Mannings’ renovation included one-touch lighting control and automation of motorized shades.

Game Plan
“We were pretty open-minded,” Eli says of his electronics plans. He and Abby did some research. They discussed it with their architect. Ultimately, though, Eli says he got most of the electronics ideas from his custom electronics integrators, Paul Austi and Tiziano Iannitelli of Audio Video Crafts in Long Island City, NY.

Eli wanted ease of use for simple entertaining. This is where Southern hospitality factors for the couple that met while attending the University of Mississippi. The Mannings host a lot of out-of-town guests. During the season, “I’m gone all day Saturday,” Eli says. “We stay at hotels before the game. Guests will be hanging out here.” The couple wanted to make sure their system would be simple enough that friends and family could pick up a controller and start using it.

No matter where they are in the condo, Eli and Abby are probably within arm’s reach of a Crestron controller. The kitchen, living room, master bedroom and master bath feature wall-mounted touchscreen controllers, and there are four wireless touchscreens throughout the home.

“I love that from [any] room, I can control anything I want,” Eli says. “I can wake up, take a shower and control the music in there. At night when I go to bed, I don’t have to worry about leaving lights on. I have an ‘ALL ON/ALL OFF’ button right by the door.”

The control system’s intuitiveness isn’t available out of the box; it takes programming and consultation. Audio Video Crafts spent time with Eli, discussing how he envisioned himself, his wife and his guests interacting with the touchpanels. That step is essential, Austi says, to create a control system that meets homeowners’ needs.

Battling the Sun
It’s easy to see why motorized shade control was so important to the Mannings. One step into the condo, and the New York City skyline becomes the immediate focal point. Wide windows dominate the rear walls, providing sweeping views across the Hudson and allowing sunlight to pour into the home.

It’s a give and take situation, Eli explains. “The view is great. At night it’s lit up. You can see the Empire State Building and whatever colors they’re displaying that night.” They enjoy the view during the day, too, but the glare is undeniable. “It beams through here, and it gets hot,” Eli says.

Audio Video Crafts’ addressed the sun issue with a dual-layer motorized shading system. One layer of Lutron’s Sivoia QED Roller 100 Shades kills the glare but allows in some light. “You can still see out of it,” Eli says. A second blackout layer blocks every ray of sunlight. That level of protection comes in handy when Eli is working at his computer, for instance. “It’s nice to have two different layers,” Eli says, as he demonstrates the one-button control.

Another benefit of the control system, one that Eli didn’t fully anticipate, is how it facilitates music listening. The Mannings’ CD collection is stored on a ReQuest media server. Eli says being able to scroll through his entire catalog on a handheld controller inspires to him to listen to music a lot more. “It’s just easier to get into my music collection,” he says while navigating his controller. “Satellite radio, CDs, iTunes, whatever.”

Big Picture Stuff
Video wasn’t a big priority for the Mannings, but there are Samsung and Sharp flat-panel TVs scattered throughout the home. Again, the placement of TVs seemed to come down to hospitality. “A lot of times after games we have people over on Sundays,” Eli says. “People will be walking from room to room watching the [later] games.”

Eli does spend considerable time with his eyes glued to a 63-inch Samsung 1080p plasma set in his study. That’s where he studies game film at home instead of on his laptop screen. “At the stadium we have large screens where you can see more clearly. I’ve kind of [replicated] that at home now.”

Each week the Giants load up Eli’s laptop with game footage of the next opponent. He’s equipped with a remote that looks like a joystick. Audio Video Crafts hooked the system up to the 63-inch Samsung. The agility of the joystick allows him to watch plays in fast -motion, slow motion and zip back and lets him watch plays again. “I might watch a play eight times. It’s really convenient,” he says.

Eli’s guests are probably most excited by the hidden bar in the living room. It appears to be a normal column next to the wet bar—until Eli presses a button on a nearby Crestron wall panel. It then becomes James Bond-esque: The column slowly rotates and reveals a covert bar area. “I just kind of wanted the place to have a little secret,” Eli laughs.

For the most part, the Mannings’ electronics are less about flare and more about ease of use. Audio Video Crafts has a unique niche area of service in that it caters to high-profile, often celebrity, clients. Austi says Eli is unique in that he’s “an extremely down-to-earth kid” and that his emphasis was on making a complex system simple for everybody to use.

Eli illustrates Austi’s point by talking about his father, Archie, the two-time Pro Bowl quarterback formerly of the New Orleans Saints. “My dad is as clueless as they get when it comes to technology, but it took me one minute to explain it to him,” Eli says of the control system. “He has had the same TV in his house for 20 years, and he’s still figuring it out. I showed him the VIDEO and “SATELLITE TV” buttons and told him to just hit OFF when he’s done. It’s been very simple for everybody.”

Tom has been covering consumer electronics for six years. Before that, he wrote for the sports department of the Boston Herald. Migrating to magazines, he was a staff editor for a golf publication and an outdoor sports publication. Now, as senior writer/technology editor of CE Pro magazine since 2003, he dabbles in all departments and offers expertise in marketing.

Have suggestions or something you want to read about? Email Tom at [email protected]