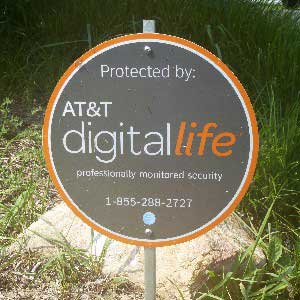 This article was originally published in July 2013. We’re sharing it again because this month AT&T is recognizing the one year anniversary of the Digital Life smart home platform. Also, it’s worth mentioning that AT&T is celebrating the anniversary with some special deals: customers who sign up for the Smart Security package beginning Friday April 25 will pay nothing for standard equipment and installation (normally $249). If you’re an existing Smart Security customer, AT&T is offering you 50 percent off additional equipment if you add an automation package. This year systems such as AT&T’s Digital Life are seeing increasing competition from other DIY and entry-level products from companies like Revolv, Staples Connect, Smart Things as well as previously existing products like Lowe’s Iris and Insteon.

Around April of this year AT&T introduced its home monitoring and automation service, called AT&T Digital Life, as a lower-priced alternative to many of the high-end systems that Electronic House covers on a daily basis. The service recently added Cincinnati, Columbus, Indianapolis, San Diego, San Jose, and Tampa, for a total of 33 markets (with a target of 50 by the end of the year.)

At its heart, Digital Life is a security system. Basic packages include things like door and window sensors, glass breakage sensors, surveillance cameras and an alarm system that sends alerts both to the homeowner’s smart phone and to a 24/7 monitoring service. While Digital Life doesn’t require the extensive programming and sometimes complicated installation of professional automation systems, this isn’t exactly a DIY project either. The devices must be professionally installed and configured to the main hub in the house. The user can then create automation events (called “programs” in AT&T’s parlance) with a computer interface or with a tablet or smart phone.

It’s not nearly as comprehensive as what you’d find from a company like AMX, Crestron, Control4, Savant or Elan (and many others), but it appears to be a good solution for people who just need the basics, but don’t want to go the DIY route with a system such as the Lowes Iris. Installation is a reasonable $149, which covers the system hub and whatever devices are in the package the user selects. Monitoring costs start at $30/month and top out at $65/month, depending on what devices are included in the monitoring.

Electronic House had a chance to tour an AT&T Digital Life demo home recently to see what was involved and hear from the homeowner how the system integrates with the family’s routine. The home, located in a suburb of Philadelphia, is owned by Chris, an engineer with AT&T who volunteered to be a beta tester of sorts for the system. He lives there with his wife and their children. It’s a pretty typical 2,600 square-foot colonial representing the type of middle-class family home that AT&T has in mind for its target market. In that respect, it’s a bit different from the luxury housing market that the likes of Crestron, Control4, Savant and others are often featured in. Check out the Electronic House 2015 Home of the Year winners here.

The Digital Life system relies on devices from a number of companies including Linear, Cisco, Honeywell and Yale. The products communicate using Ethernet, Wi-Fi and Z-Wave. A central hub in the basement is the brains of the system. All the devices on the network are operated via an iOS or Android app or a web interface on a computer.

Chris says the initial installation took most of the day, which included installing the central hub in the basement and all the integrated devices. AT&T says that installation can take anywhere from 3 to 8 hours, depending on the number of devices, but that the $149 fee is the same for all installations.

During the installation, Chris says the two technicians asked him questions about his lifestyle, the people in the house who would interact with the system, and other questions that would allow the installers to setup the the components to suit his needs.

Programming of events, such as notifications that the front door has opened or that the security camera spotted someone, are done by the homeowner directly on the system app. “It’s self-explanatory,” says Chris. “My 10-year old even set up a notification.” The activities aren’t complicated though, and mostly involve turning things on and off (such as a foyer light) or sending notifications to the iPad when a sensor is triggered.

As noted, security is the primary function of the system as installed in this house. Contact sensors on the front and back doors, all the first floor windows and the garage door, tell the system when a door or window has been opened.

In the living room is an Ethernet-connected surveillance camera that covers a view of the first floor. A glass-break sensor mounted on the ceiling responds to the specific sound frequency of breaking glass. When triggered, will set off the home’s alarm and send an alert to the 24/7 monitoring service.

Also on the main floor is a networked thermostat. This is probably the device that Chris interacts with the most. He can adjust the temperature from his iPad or iPhone and especially likes the ability to make changes remotely, such as when the family is coming home from a trip and wants to get the house at the proper temperature before they arrive. “I’m kind of lazy to begin with, so sitting up in bed and changing the temperature rather than getting up and going downstairs is very convenient,” he says. The thermostat can be programmed to change temperatures at different times of the day or for different circumstances (such as when the alarm is set to “Away”), but Chris chooses to adjust it on-the-fly.

Chris’ other favorite part of the system is the Yale deadbolt lock. It includes a built-in keypad, so no one in the family needs to carry a key. Each family member (plus the house cleaner) has a unique entry code. When a code is used to open the front door, Chris gets an alert on his phone or tablet, and knows exactly who entered the house. To confirm that, he can view the indoor surveillance camera and see if his kids brought any friends over when they came home.

“Knowing when people are home rather than having to call home to see if my kids are back from school–that helps my stress level a little bit,” he explains.

In the finished basement, where Chris has a front-projection home theater system, he had the AT&T team put in a water sensor near the sump pump. In the event of a flood Chris will be notified before significant damage can take place.

On the second floor, Chris uses an appliance module to automatically turn on and off a radio in one of his children’s rooms. She likes to go to sleep with music in the background, and this device allows Chris to turn the radio off when she’s asleep without creeping in and waking her up by accident.

Chris says he can envision adding a few more devices to the system, such as more lighting control and more cameras.

AT&T’s Digital Life system appears to cover all the basic expectations that people have of monitoring and automation systems, with the emphasis on monitoring. The system can’t integrate everything, especially the audio/video entertainment systems that other companies really specialize in. The customization is also significantly limited compared to some of the systems mention earlier, but seems to be a good balance of price, ease-of-use and functionality for middle-class families. Chris notes that he was initially struck by the “wow” factor of being able to operate and visualize so many devices from his iPad, but the convenience and security is what makes it stand out for him.

Other companies not traditionally in the automation or security markets are also trying to elbow their way in. Comcast offers a DIY home monitoring system with a $10/monthly fee. Verizon also offers a home monitoring and control solution to FiOS customers, also for $10/month, and also user-installed. AT&T’s Digital Life appears to have a better balance of hand-holding (professional installation is required) and user-customization.