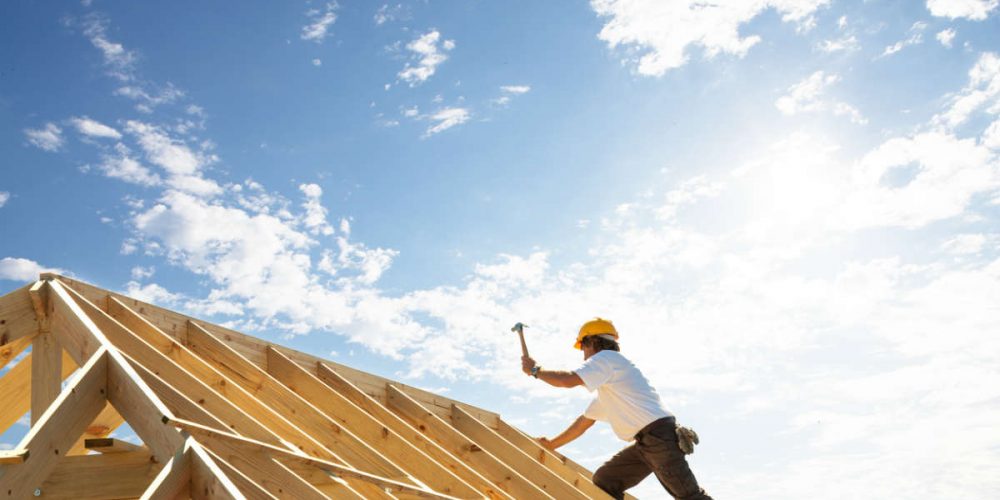 2018 is on track to be another solid year for home renovations, with half of homeowners on Houzz planning to begin or continue renovations (51 percent), according to the seventh annual Houzz & Home survey of nearly 150,000 respondents in the U.S.

Continuing the boom of the past three years, renovation activity and spend was strong in 2017, with 58 percent of homeowners renovating their homes, at a median spend of $15,000. While long-term owners drive the majority of home renovations, recent home buyer share is slowly ticking up.

Kitchens and bathrooms topped the list of interior remodels for both renovation frequency and spend in 2017, with nearly one-third of renovating homeowners tackling kitchens (31 percent), followed by guest bathrooms (27 percent).

“All of the evidence from our research points to 2018 likely being another robust year for the home improvement industry,” says Nino Sitchinava, Houzz principal economist.

“Recent buyers and long-term homeowners alike are keen on investing in major projects. Kitchens and bathrooms continue to fuel spend, while exterior features and systems, such as home security and automation, are on the rise. Houston’s rebuilding activity has brought the city’s median renovation spend up to one of the highest in the nation, while coastal cities maintain nearly double the median national spend. We expect the momentum to continue in 2018.”

Over the past two years, homeowners have become more deliberate in planning and budgeting for renovations and were 12 percent more likely to set a budget in 2017 than in 2015 (77 and 69 percent, respectively).

When it comes to funding renovations, cash remains king (85 percent), followed by credit cards and loans secured by home value (33 and 11 percent, respectively), including home equity lines of credit and mortgage refinancing.

Following a year of record devastation by the 2017 Atlantic hurricane season, median spend on home renovations in the Houston metro area increased by 60 percent, from $15,000 in 2016 to $24,000 in 2017, making it the fourth highest spend among the top 50 U.S. metros last year.

After Houston, the second largest increase in median spend took place in the larger Los Angeles metro area, increasing by 25 percent from $20,000 in 2016 to $25,000 in 2017. This is likely driven in part by the damage inflicted by Southern California wildfires.

Consistent with widespread hurricane and wildfire activity in 2017, natural disasters are cited more frequently as a reason for renovation in 2017 (six percent) as compared with prior years (four percent). 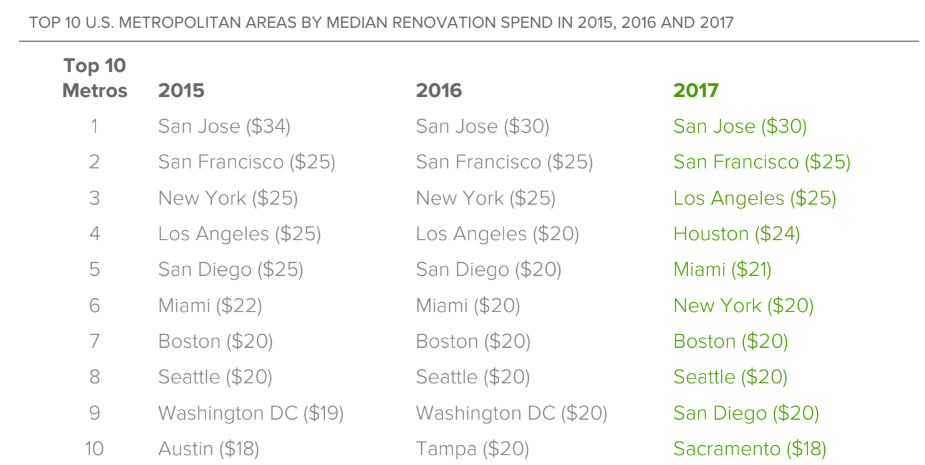 Renovations Worth the Cost

While improving a home’s design or functionality are the top considerations during renovations (89 and 84 percent, respectively), increasing the home’s resale value is an important renovation consideration for over two-thirds of renovating homeowners (69 percent).

It is not surprising then, that some of the most frequent renovation projects are also the ones that are perceived to contribute the most to the home’s resale value. Specifically, four in five renovating homeowners report that kitchens and master bathroom upgrades increased the value of their home, above and beyond any other renovation project.

In fact, one-third of kitchen renovators believe that their home value has increased by at least the full amount of the project cost post-renovation (33 percent).

The largest gains in adoption of home security and home automation systems were among long-term owners who appear to be catching up to more tech-savvy recent buyers.

Nearly nine in 10 homeowners chose to hire a home professional for renovation needs (88 percent). As demand climbs for systems and exterior feature upgrades, homeowners are more likely to hire specialty service providers like electricians and painters to complete work without the involvement of a construction manager, such as a general contractor or builder (51 percent in 2017 versus 44 percent in 2015). 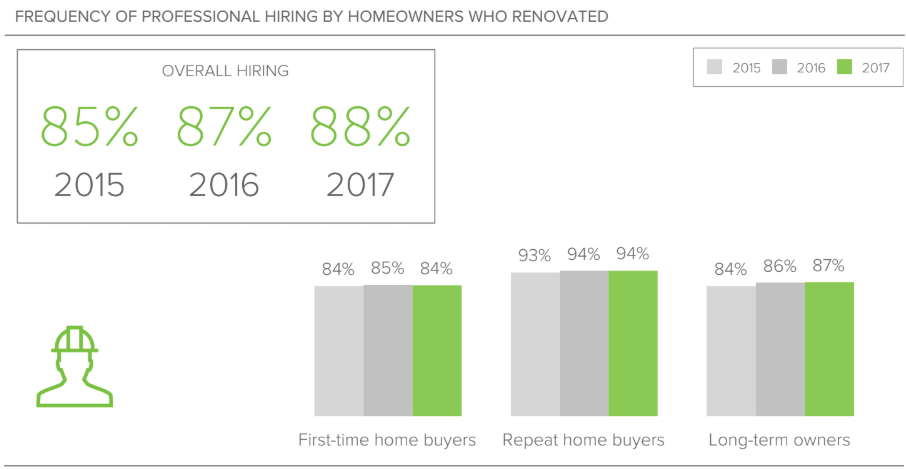 In fact, this trend is universal among all segments of homeowners (48, 49 and 50 percent for first-time buyers, repeat buyers and long-term homeowners, respectively).

When it comes to hiring, the study found that homeowners consider a very limited number of professionals. For example, homeowners seriously consider only three general contractors or builders and only two architects or designers for their renovation projects.