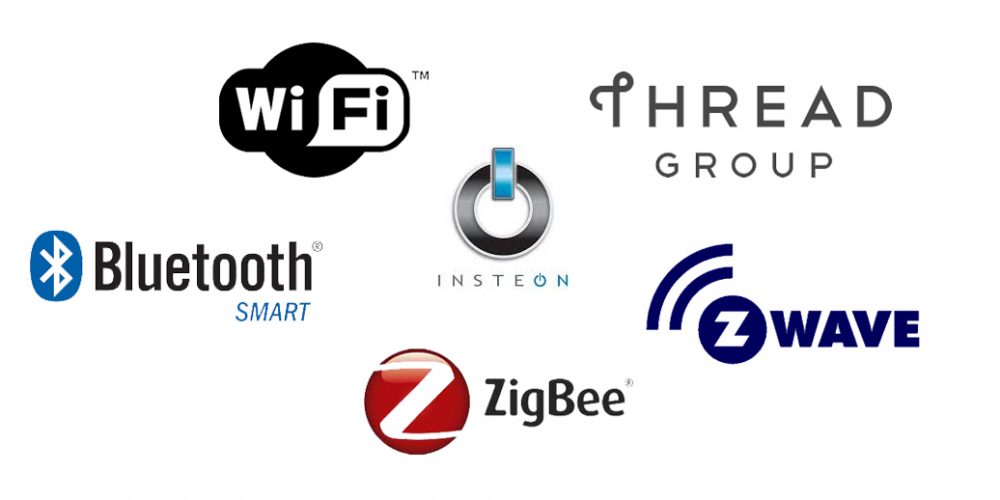 There are a wide variety of technology platforms, or protocols, on which a smart home can be built. Each one is, essentially, its own language. Each language speaks to the various connected devices and instructs them to perform a function.

Choosing a smart home protocol can be tricky business. Obviously, you want one that will support a large number of devices, as well as one that offers the best possible device interoperability (the ability for devices to talk to each other). But there are also other factors to consider, such as power consumption, bandwidth and, of course, cost.

Following is an overview of some of the most popular home technology platforms on the market. While not intended to be the “be-all, end-all” treatise on which protocol is best for your smart home project, it’s a great place to start.

UPB
Another wired technology, Universal Powerline Bus, while similar to X10, was intended to be an X10 replacement, given its superior reliability (less susceptible to powerline noise and increased range (it can transmit over one mile). The technology uses a home’s existing power lines, which reduces costs a bit, to send signals that will control devices both inside and outside the home. However, UPB and X10 products are not compatible. Thus, if you already have X10 products and want to add UPB products to the mix, a special controller will be required that will talk to both.

While UPB is a reliable powerline system, it is difficult to combine it with the newer wireless technologies such as Wi-Fi, smartphones, etc. What’s more, while the platform claims a 99% reliability factor, it offers a relatively low bandwidth, so performance can be slow. It also provides no encryption, meaning it is not quite as secure as wireless. The technical complexity of the system makes for a difficult user-setup experience. And the big downside: There are far fewer UPB-compatible devices than for other technologies.

INSTEON
Introduced in 2005, Insteon devices communicate over both power lines and wirelessly, ensuring multiple pathways for messages to travel. Insteon is also X10 compatible, which means that users can add wireless capability to an existing X10 network; doing so can be an effective and cost-efficient way to make a full-blown transition to wireless. Insteon technology even supports home automation novices so that non-technical individuals can set up and add devices to the network.

There are almost 200 different Insteon-enabled home automation devices available on the market (including the “hub” controllers), many sold at national retail chains. Insteon devices don’t have to be “enrolled” into the home automation network; they join the network as soon as they’re powered up, simplifying installation. There’s no practical limit to the size of an Insteon network; it’s not unusual to have more than 400 devices in a single installation. Insteon’s dual-band mesh network turns all powerline-operated devices into repeaters, greatly extending signal range.

Z-WAVE
One of the most popular of the wireless home automation protocols, Z-Wave runs on the 908.42MHz frequency band. Because this is a much lower band than the one used by most household wireless products (2.4 GHz), it is not affected by their interference and “traffic jams.” A significant advantage of Z-Wave is its interoperability. All Z-Wave devices talk to all other Z-Wave devices, regardless of type, version or brand. Further, the interoperability is backwards- and forward-compatible in the Z-Wave ecosystem; that is, Z-Wave products introduced today will work with Z-Wave products from a decade ago and with products in the future (although possibly with some limits on functionality).

There are currently over 1,200 different Z-Wave -compatible devices on the market, giving consumers access to a wide range of options when automating their home. Known for their low power consumption, Z-Wave devices are designed for ease of set-up and use, a boon to budding home automation aficionados. As with Insteon, a Z-Wave’s mesh network makes all devices double as repeaters.

ZIGBEE
There are myriad similarities between Z-Wave and ZigBee. Like Z-Wave, ZigBee is exclusively a wireless home automation protocol. While it claims many home automation enthusiasts, its full acceptance is limited by the lack of interoperability between ZigBee devices, which often have difficulty communicating with those from different manufacturers. As a result, ZigBee is not necessarily an ideal choice for anyone just starting down the home automation road—unless, of course, they use device from just one manufacturer. Plus, there are different versions of ZigBee which do not necessarily talk seamlessly with each other.

Much like Z-Wave, ZigBee is a low-cost, low-power technology, meaning that the battery-operated devices in a ZigBee network will enjoy long life. Running on the 802.15.4 wireless communication standard, ZigBee also uses a mesh network structure that provides excellent range and creates rapid communication between ZigBee devices. The latest version, ZigBee 3.0, promises better interoperability between devices and versions. That remains to be seen.

WI-FI
Boasting high bandwidth, Wi-Fi is already pretty much everywhere, so many manufacturers are enthusiastically making smart home devices to work with it. A multitude of homes in the U.S. already have wireless routers (which work on the Wi-Fi protocol), so obviously they’ve already got a central hub in place to which Wi-Fi compatible devices can be connected.

This does, however, come with one key drawback: interference and bandwidth issues. If your house is full of Wi-Fi-connected gadgets (TVs, game consoles, laptops, tablets, etc.) then your smart devices will have to compete for bandwidth and may be slower to respond. Wi-Fi is also hungry for power; consequently, battery-operated smart devices such as locks and sensors get drained much sooner than in other wireless environments.

BLUETOOTH
Bluetooth is at the core of hundreds of products, from light bulbs to speaker docks to locks (Kwikset introduced the first Bluetooth lock, Kevo, in 2013). It has higher data bandwidth than ZigBee and Z-Wave (though lower than Wi-Fi) but, to its advantage, sucks up far less power than Wi-Fi.

Conversely, it also has a fairly limited range, so for devices that require constant connection—think motion sensors, security systems, etc.—it may not be the ideal platform. However, it has been reported that the newest version of Bluetooth (Bluetooth Low Energy, or BLE) will be capable of forming mesh networks, greatly extending its range and giving ZigBee and Z-Wave a run for their money. And with no central hub required, the convenience factor cannot be overlooked.

ABI Research says that market share for smart home applications such as lighting, security, and energy management based on Bluetooth (which is made very secure via government-grade encryption) is forecast to increase at a faster rate than any wireless technology over the next five years.

THREAD
Thread is a new wireless protocol for smart household devices. The Thread Group was formed in July 2014 by seven founding members, including Google’s Nest Labs and Samsung Electronics. More than 250 devices can be connected on a Thread network and, because the majority of devices meant to be connected to the network are battery-operated, it’s very frugal on power.

Using the same frequency and radio chips as ZigBee, Thread is intended to provide a reliable low-power, self-healing, and secure network that makes it simple for people to connect more than 250 devices in the home to each other. What’s more, they can be connected to the Cloud for ubiquitous access. Nest Learning Thermostat and Nest Protect are already using a version of Thread, and more products are supposed to enter the market this year.

APPLE HOMEKIT
While not a communications protocol, Apple HomeKit should be mentioned if only for the media attention it is attracting. Announced by Apple at its Developers Conference in 2014, HomeKit is actually a software framework, allowing developers to build smart home devices that will connect directly to the iPhone and iPad and be controlled by a dedicated app.

In reality, HomeKit is going to be a “conduit” of wireless technologies. It’s already known that HomeKit- approved devices will use Wi-Fi and Bluetooth as their primary interfaces, and a Z-Wave/Zig-Bee bridge is on the way. Apple has approved an Insteon-HomeKit bridge as well, and Lutron offers a Homekit-compatible hub for its Caseta Wireless system.

Many device manufacturers are working feverishly to integrate HomeKit into their products, although, as of now, there are only a handful on the market, including the popular August Smart Lock. This is a technology that is in its infancy but certainly bears watching.