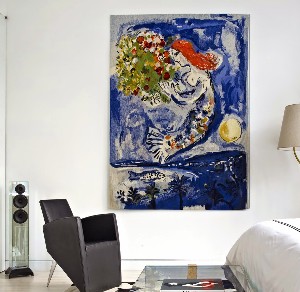 The tug of war between design and performance is no more pronounced than in the world of high-performance audio. However, the stereotype of the stereo—a set of oversized black boxes and nest of boa-constrictor cables, is only a stereotype, at least when implemented by a design-minded dealer and installer.

Dave Lalin, owner of the high-end electronics store Audio Doctor (www.audiodoctor.com) in Jersey City, NJ, met this tug of war head on in one of his most challenging projects: The Waterfall Mansion in New York City.

The Waterfall Mansion is an iconic, five story, 11,000 square foot luxury property in what used to be a carriage house 120 years ago. Now it’s a showpiece for fine art and finely integrated electronics. A complete remodel of the house was done by owner/developer Kate Shin and architect Toshiko Mori. One of the most dramatic changes to the home was the addition of a 22-foot indoor waterfall and reflecting pool, which gave the home its name.

An elegant home like that needed music, so Audio Doctor, was called in to give the home the full electronics treatment. For this job there were two goals: create state-of-the-art entertainment spaces and make the technology blend into the décor.

For some people, blend means: hide. Not in this home.

That was a challenge that Lalin was up to. His own Victorian-style home is also where he runs his business, and part of the property is set up to show off how exquisite audio and video gear can enhance home design.

The first task was to install a whole-house music system. Because the home’s remodel was already complete, and there was little pre-wiring available aside from network wiring, Lalin couldn’t install music distribution that required extensive re-wiring without the process being intrusive to the building. He also didn’t want to go wireless because he was concerned about reliability. Instead he installed a wired IP system based on Netstreams. With Netstreams, all the audio (up to 24/196 high-resolution quality) is carried from an Ethernet hub over network cable to local amplifiers installed in the various rooms. This made installation fairly easy and insured music quality without new wire runs.

Except for some Episode in-wall speakers in the kitchen and dining rooms, most of the home’s loudspeakers, and some of the audio components as well, are fully exposed and intended to be design elements in the room equal to a piece of sculpture or bespoke furniture.

The home’s namesake room, the Waterfall Room, also functions as an art gallery and a place where guests are entertained, so Lalin had to ensure that the components looked like they belonged there. The waterfall is actually behind a glass wall, so Lalin used glass speakers, coincidentally called Waterfall Niagara, to complement the real waterfall and glass wall. In the Niagara speakers, the drivers are enclosed in 15mm glass, so the entire structure is transparent, allowing the real waterfall to show right through.

Between the two speakers is a Devialet 200 amplifier, which is handsomely displayed on a stand designed for it.

In the main living room of the home, Lalin designed a surround sound system made up of Cabasse Artis Baltic speakers, which look like modern art sculptures placed around the room.

In the lounge are Artcoustic speakers, which are designed to be covered with fabric bearing art prints or designs, allow the speakers to essentially be camouflaged as art. Instead of speakers, you see artwork on the shelf or mounted on a wall.

More glass Waterfall speakers are found in the library. In this case the smaller Elora models, are displayed on table shelves. Waterfall Victoria tower speakers also adorn the master bedroom.

In addition to the combination of stealth and display audio, Lalin installed video and home automation products. The most attention-getting is the 7-foot custom mirror TV. This is no pre-configured mirror TV, but one Lalin designed specifically for this house. “We work with a company that custom cuts high performance 2-way mirror glass,” says Lalin. He then designed a mounting structure in the wall to house a 70-inch Sharp TV and fixed the mirror and TV together. “It looks like it’s part of the house,” he says. 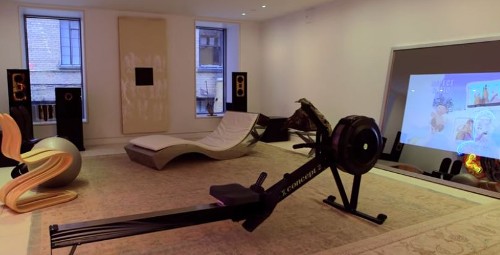 All the audio and video is controlled by an RTI home automation system designed for easy operation. “We have a brilliant programmer,” says Lalin. The interface includes pull-down menus that allow the user to select the room, the source and easily play music anywhere in the house.

The client loved the results, and enjoys showing it off. Lalin is proud of the work because it’s proof that a high-end audio experience can not only blend in with a home’s décor, but also complement it. “We select products that are visually stunning,” Lalin explains. “A lot of high-end audio and electronics products are elegant-looking, but you have to find an installer who can blend these two worlds together.”

Since completion, the house is now being used mostly as an art gallery and for special events, so the extra attention Lalin put into the design is being appreciated by more people.