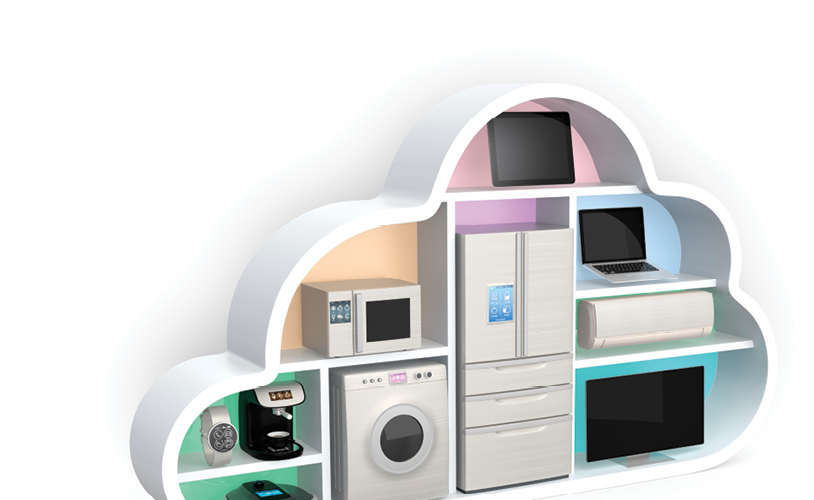 If you have a router in your house, you’re familiar with Wi-Fi, the communications protocol that enables your smartphone to stream music from the backyard and your laptop to access email from the living room couch—or wherever you happen to be in your house. This wireless networking standard has untethered us from cabling for our communications needs, and has become so pervasive in American homes that manufacturers have implemented the technology into all kinds of devices. With a Wi-Fi chip embedded in it, a light switch can be controlled from an app on your smartphone, for example. But as most people have likely experienced, Wi-Fi can be finicky. Connections can drop unexpectedly, products located far away from the router might lose signal, and as more and more devices join a Wi-Fi network, the communications highway becomes increasingly congested and slow.

While Wi-Fi works, and is still a favored communications protocol of many manufacturers due to its low cost (your existing router does the job of traffic cop instead of a completely new hub), several other wireless “mesh” networking protocols have been developed during the past few years to work around some of the inherent problems of Wi-Fi. “Try communicating with a smart washing machine that’s in the basement from a smartphone in the upstairs bedroom,” offers Insteon’s Joe Gerber as an example. “Distance, combined with the metal of the washing machine can kill the signal.”

Adds Ryan Maley, director of strategic marketing, ZigBee Alliance: “Wi-Fi connects point-to-point, so when an access point fails, your laptop must be manually switched to some other access point. In a mesh network, every device automatically connects to every other device near it. Single points of failure are therefore eliminated. Even if one connection goes down, the device can automatically use the other connection and the network still works. The mesh also extends range since messages can be passed along bucket brigade-style throughout the network.”

Insteon is just one of many manufacturers of smart home devices incorporating networking chipsets into its products as a way to establish simple, reliable, affordable, and easy-to-install home automation solutions for consumers. It’s an industry that’s booming. According to analysts at Research and Markets, the Internet of Things (IoT), where devices talk to each other via the Internet and/or short-range wireless networking, will represent a $7 billion market by 2020. If IoT devices and wireless networking aren’t on your radar, they should be. Here’s a look at some of the protocols poised to change the way we interact with our home’s lights, thermostats, A/V equipment, and more—and in some very positive ways.

Arguably two of the most popular and mature networking standards are Z-Wave and ZigBee. However, newcomers like the Thread Group, Apple HomeKit, and the AllSeen Alliance are bringing additional choices to the table. Although Z-Wave, ZigBee, Thread, HomeKit, and AllSeen’s AllJoyn protocol differ in their technological design and approach to the smart home market, the goal among all is to enable devices that share a like networking language to communicate seamlessly with each other and with minimal configuration, which means a complete system can be pieced together by a homeowner affordably and easily.

The basic concept is this: A network-enabled home automation hub will be able to instantly recognize, sync up with, and monitor and control other products that communicate via the same protocol, such as light switches, thermostats, and electronic door locks. These devices will be able to send messages to each other with ease, creating a networking backbone to support a complete home automation system.

So, if all of the networking protocols are positioned to offer similar benefits, which one should you choose? Is there a right or wrong way to connect the devices in your home?

If you asked these questions a year ago, you’d likely hear each networking organization championing its own respective solution. Today, it’s a different story. While each protocol is designed to address a certain need or solve a particular problem, “there is no clear-cut winner,” says Gerber. “Basically, there’s a lot of uncertainty over which protocol will reign supreme. The result: confusion among consumers,” adds Mark Walters, chairman of the Z-Wave Alliance.

But at least for a while, you may not have to commit to one particular protocol. To ensure that their devices will work with the broadest range of products—regardless of protocol—manufacturers have begun to embed their products with multiple types of chipsets. “We try to be protocol agnostic and work with any radio frequency technology,” says Kevin Kraus, director of product development at Yale. “Our electronic door locks have a combination of both Z-Wave and ZigBee radios.” Ostensibly, this means that this lock can talk with both a Z-Wave and a ZigBee home control hub and link with both Z-Wave and ZigBee light switches, thermostats, and more.

Where you’ll see the widest adoption of multiple communications standards is with manufacturers of home automation hubs, such as the IRIS from Lowe’s and the Connect from Staples. “Companies like these want their hubs to be able to talk to as many products as possible and most importantly hot products like the Nest thermostat and the Philips Hue light bulb,” says Walters. “While this approach makes sense now, the more chips you put into a product the more expensive that product becomes. As the market matures, we’ll see manufacturers begin to remove some of the chips from their products to opt for one networking standard or another.”

ZigBee
There are currently more than 1,100 products that talk via ZigBee, and although it was adopted initially by utilities to smarten up their meters, it’s finding a foothold in the smart home sector. ZigBee chips are developed by a variety of semiconductor companies. This gives manufacturers of smart devices more choice, and therefore keeps costs competitive. The result is that ZigBee comes in many different flavors to support specific applications, like lighting, energy management, etc. Combine two different types of ZigBee chips and you might need extra bridging hardware or software to establish communication. (Note: The ZigBee Alliance recently announced ZigBee 3.0, which will unify diverse standards to eliminate the need for different flavors to support different applications.)
Core applications: smart lighting, with support from Philips, Osram, Sylvania, and GE
Major supporters: Staples, Lowe’s, Logitech, Belkin

Z-Wave
There are 1,200 products on the market currently embedded with a Z-Wave chip. From the get-go, the Z-Wave Alliance focused on home automation, and this continues to be its strength, along with support from many leading manufacturers of security systems, including ADT, Honeywell, and Alarm.com. There is one manufacturer of Z-Wave chip, and that chip is embedded universally, regardless of product type. In other words, a thermostat gets the same chip as a light switch as an electronic door lock. This approach has made it easier and quicker for manufacturers to develop products that work together, but sometimes requires fine-tuning to ensure everything works together seamlessly.
Core applications: home control and security
Major supporters: ADT, AT&T, Verizon, Honeywell, LG

Thread
Established in July 2014, the Thread Group is working on a networking standard that’s IP (Internet Protocol)-based and designed to work with Wi-Fi, but with some significant improvements. One of the most notable, according to Chris Boross, president of the Thread Group and technical product marketing manager at Nest Labs, is “extremely low power consumption,” which means a battery that powers a wireless product could last for several years. When batteries last longer, concerns about the network going down are mitigated, and for security-based products like electronic door locks, maintaining constant, and reliable communications is critical. “With a lock, you want no latency in operation,” Kraus explains. (Yale is a member company of the Thread Group). “And, if the network is ever jeopardized, the lock has to keep trying to establish network connectivity, which sucks the battery life, and nobody wants a dead door lock.”

Currently under the certification process, Thread has been incorporated into few products other than Nest thermostats, but has support from Yale, Tyco, and Somfy, among others. Boross expects 2015 to be a banner year of product announcements, due to Thread’s ability to be easily augmented into a home’s current Wi-Fi network.
Application strength: to be determined
Major supporters: Tyco, NEST Labs, Samsung Electronics, Yale

Apple HomeKit
Thread, Z-Wave, Zigbee …. Apple doesn’t care. It’s recently released HomeKit “platform” was designed not as a communications standard, but as a way to tie all products, regardless of protocol, together in one cohesive unit. Naturally, these devices must go through Apple certification, which is currently in its infancy with limited availability of HomeKit products. However (and this is the really good part), a HomeKit-enabled hub, such as Insteon’s new hub, is able to act as a bridge so that any device that’s networked to that bridge can be part of HomeKit ecosystem.

All that’s left for the consumer to do is download the appropriate apps from the Apple App Store, and they can use their iOS 8 framework to control HomeKit chip-enabled devices via their smartphones, through either Bluetooth or Wi-Fi. Unlike most app-based control today, in which each product is managed via is own individual app, HomeKit enables users to operate multiple devices with a single app, regardless of their native networking protocol.
Application strength: to be deterimined
Major supporters: Insteon, Schlage, Chamberlain

AllJoyn
AllJoyn, like Apple HomeKit, is a technology designed to link smart home devices together, regardless of communicating platform. But unlike HomeKit which is more of a “closed community of products, AllJoyn is an open source software framework, like Linux, that offers manufacturers unlimited choice in terms of communication transport and platform, which leads to brand-agnostic interoperable products that are able to communicate and interact with each other freely,” explains AllSeen Alliance senior director of IoT, Philip DesAutels. “Manufacturers can use whichever networking protocol they want, be it Wi-Fi, Thread, or something else; AllJoyn creates a network on top of the networks that are already in place.” Security is a big focus of the AllSeen Alliance, too. Homeowners communicate with AllJoyn products not through the Cloud, but directly, which minimizes their home network’s exposure to hackers. There are currently about 100 different types of AllJoyn-enabled products on the market, most of which are available at retail stores.
Application strength: open source code freely available to product developers; secure communications, protocol-agnostic
Major supporters: Electrolux, LG, Microsoft (AllJoyn is expected to be in every Windows 10 product), Panasonic. EH