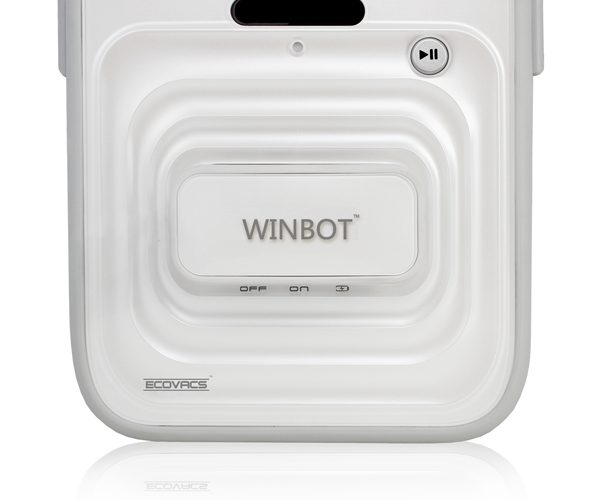 It’s the summertime, so most likely, you’ll want to look out of your windows on occasion. I’m not saying that people don’t peep out the windows in the wintry months, but all of those gloomy days are a perfect excuse to leave the shades drawn.

Another good excuse? Dirty windows. Like, filthy dirty. When it comes to chores, cleaning the windows probably ranks right under toilet duty. However, you always have those shades (hopefully motorized!) to shield you from your: sloth.

Now, I have a confession to make: My windows are pretty funky. Like, unless I squash a bug on the windows, I rarely clean them—and even then, it might take me a day or two. I’m not exactly proud of it, but it does make me a prime candidate for something like the Winbot W730,: one of those robotic crazy gadgets from Ecovacs: Robotics.: It’s: designed to clean any type of glass surface, including windows of all shapes and sizes. Even better, you don’t have to remove those windows, because this thing can cling to them like Spider-Man.

It also has more accessories then your friendly neighborhood wall-crawler as well. Inside the box, the Winbot W730 includes the actual robot, a safety pod and safety rope, two sets of cleaning pads, cleaning solution, a power adapter, and a remote control.

To get the Winbot going, the company recommends that you charge the backup battery for at least two hours. However, it should be noted that the Winbot is tethered the entire time it’s in use. Yes, it has an actual power cord!

Once the unit is charged, you’ll need to attach the cleaning pads on the bottom of the Winbot. This is a super-easy process, as it basically involves sticking pads to Velcro. Ecovacs Robotics suggests that if you’re above ground level, you should also attach the aforementioned safety pod. Otherwise, it’s like going rock climbing without a safety harness. However,: in this case, it can save you $400 (MSRP) and having to dispose of various broken robot parts.

After charging, plug the Winbot W730: into a nearby outlet. Yes, having to plug this thing in: seems weird after charging it and: is a bit of a bummer. However, it does come with a pretty lengthy 10-foot power cord. If: the closest outlet still isn’t within reach, you can add in an: extension cord.

Next, spray a little of the included cleaning solution on the front cleaning pad. The Winbot does not have any sort of a tank and doesn’t spray cleaning fluid as it goes along. It’s also important to note that the cleaning pads can go into your washing machine, so you won’t have to replace: them after each use.

Right before you’re ready to roll, place the Winbot up against the window, hold it there with your hand, and flip the power button to On. While you’re doing those things, you may also want to prepare yourself for the noise, because this thing is pretty darn loud. That said, it also works.

A few: seconds after you turn the Winbot on, you’ll see a blue light on the top of the device. Once you see that light, let go, press the start button, and off it: goes. And yes, you can let go; the Winbot has an internal vacuum pump and powerful suction motor to help it cling to the window. At first, I was really amazed at the device’s cleaning ability and how it knew exactly where to go. The Winbot has patented Pathfinder Technology, an on-board computer and multiple sensors to help detect obstacles. For instance, on my glass doors, the robot: knew where the frame was and when to turn itself around accordingly. It also covered the area pretty well and didn’t seem to mind my shades, although I was worried they would get in the way.

The Winbot did clean my windows and has a remote, in case you think it misses a spot. It clung to every window and tackled that dirt like a champ. Also, I didn’t seem to mind that it had the cord, because it could clean every window in the house without having to take a break.

After: the Winbot completes its funky ride, it sings a little song to let you know it needs help getting down. It’s like a high-tech toddler. However, instead of leaving a chair: covered in Cheerios, the Winbot: leaves a little bit of black goo on the window (which I will get to in a minute).

To actually get it off the window, grab the handle, switch the device to Off, and insert a finger into the air release trigger and pull up on it. This is an important step, because otherwise it’s kind of hard to get the device off the window.

Was the Winbot: cool? Absolutely! Did it make my windows seem: sparkly and new? Meh. Herein lies the rub…

It was awesome to be able to fold laundry and clean windows simultaneously. However, it took the Winbot almost 9 minutes to clean one side of my sliding glass door. If I can properly motivate myself, I could do the same thing in about three seconds. Also, the Winbot left streaks, which is something that I’m pretty sure that I can do. It even: leaves the aforementioned black goo: when you “eject” it from the window. Obviously, this is something that the company knows about, because they’ve included a finishing cloth: and instructions to give the window a little shammy after it’s done—which between the spraying and the swiping is: basically you cleaning the window, no?

The Winbot W730 is fun and would probably be great for someone who has a ton of windows. However, it does require a lot of “participation,” which is probably what you were trying to avoid by buying one of these crazy gadgets in the first place. You have to spray it, you have to place it, and you have to remove it once it’s finished cleaning—and do that repeatedly for every window in your house.

I need to mention that I probably would gone through the entire summer without cleaning my windows, so maybe this robot was helpful. Really though, unless you have floor-to-ceiling windows, a severe problem with motivation, or a need to live out BattleBots in your own home, I don’t really see the purpose of paying $400 for the: Winbot W730.

Looking for more crazy gadgets to do your dirty work? Check out our article on “Cool Gadgets That Can Help You Have a Slacker Summer.”