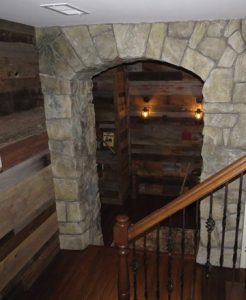 If you live in a part of the country where basements are common, consider yourself in luck. This subterranean space can be a prime location to convert into a home theater. However, that’s not to say it’ll be easy. Basements can be a real pain to get into home theater shape. Rob Szewczyk, of St. Charles, Ill., knew all about dealing with finicky basements, having installed home theaters in several of them for other people, including setups in his previous two homes. When he and his wife had their current home designed, he wanted his next home theater to be in a basement again, but without any compromises on design or performance. 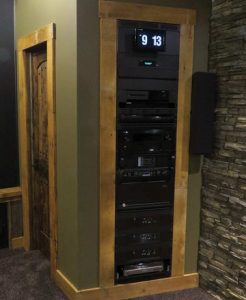 Aside from obstacles like HVAC ducts and support beams, basements can be difficult and expensive to acoustically isolate. Bass is especially problematic, because no amount of drywall layers or green glue can completely keep a 20Hz wave from leaching into upstairs rooms. Szewczyk likes a challenge, and especially likes a creative solution. To isolate the sound in this basement, he had another room excavated underneath the garage and then the entire room built from Spancrete, a concrete material used for parking garages. Not only would the Spancrete keep the cars above from falling on any movie viewers’ heads, it would prevent the sound from the theater from leaking out.

The aesthetic design of the theater is very rustic. It might even be described as cave-like. Szewczyk accessorized with lanterns and tools that look like objects reminiscent of an old western gold mine. “I wanted you to get the feeling you weren’t in suburbia anymore,” he says. To enter the theater, you must pass through a stone archway, which Szewczyk commissioned from a local sculptor. You then pass through a door that looks like it came off an old dungeon. It’s actually a new door, but Szewczyk attacked it with tools to give it a distressed look. Inside, the theater is decorated with reclaimed barn wood and stone veneer.

The fun doesn’t end with the design. Szewczyk built his own infinite baffle subwoofers into the walls of the room using eight 18-inch drivers. For every pair of drivers, he built a box enclosure with open fronts and backs, and secured them to the floor in the front wall so that the boxes didn’t touch the wall framing and introduce vibration. These subwoofers are powered by a 14,000-watt amplifier.

The home theater’s eight seats are built on two platforms that raise the audience to a perfect viewing level and offered Szewczyk something onto which to attach the Buttkicker LFE motion transducers. Each of the two platforms has two large Buttkickers (wired out of phase from each other), plus a mini Buttkicker attached to each seat. When the low frequencies kick in from the room’s processer, every audience member can feel the vibrations. Speakers from Niles and Phase Technology round out the sides and rear channels of the theater’s surround-sound system.

The front speaker array, made of two GR Research LS-9s and an LS-C center, were built to order. Each of those LS-9s features 12 woofers and nine midrange/tweeter panels and stand over six feet tall. All of these speakers are driven by a Sherbourn seven-channel amp. The total amplifier power in the room is 28,800 watts.

The room’s DaLite 16:9 retractable home theater screen (which also hides a Vizio flat-screen LCD TV) is lit up by a Sony VPL-HW55ES projector. 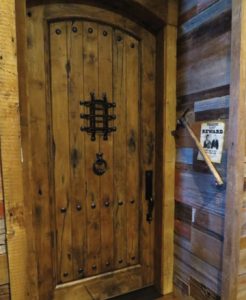 All of the components, including a media server, Xbox One, satellite TV receiver, Blu-ray Disc player, and turntable, are housed in an equipment rack on the side of the room. Szewczyk controls the system with a Logitech Harmony 1100 remote that he programmed himself.

As someone who likes to build and tinker, this room is probably going to enjoy more modifications over time by Szewczyk. It’s already wired in the ceiling for 3D audio, like Dolby Atmos or DTS X, and who knows what else the future holds for this DIYer’s dream theater. EH