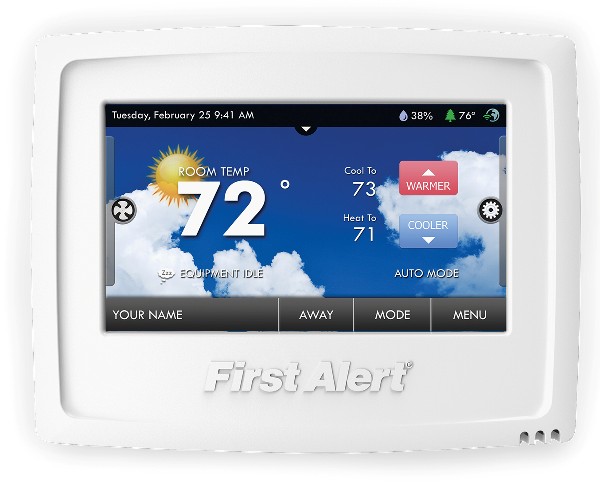 Known for inventing the first residential smoke alarm, First Alert has at the International Consumer Electronics Show this week in Las Vegas, officially entered the DIY smart home market with the introduction of several smart, connected products, all of which can be monitored and controlled via an iOS app.

Recognizing that safety and security usually serves as the cornerstone of a DIY smart home, First Alert focused much of its R&D efforts for its new Onelink product line on improving the functionality of smoke and carbon monoxide alarms. Its new Wi-Fi- and Bluetooth-enabled alarm combines smoke and carbon monoxide detection, along with several other features. One of the most appealing is the ability to check the battery life of the unit from the Onelink app. “It completely eliminates the hassle that homeowners have dealt with for years, where they would need to climb a ladder to see if the battery is dead or working,” says a First Alert spokesperson.

The detector’s built-in light serves as notification, too, and can also be used as a nightlight. The alarm is compatible with existing interconnected hardwired alarms within the home, saving consumers the trouble of having to re-install or purchase all new alarms. When the alarm sounds, a notification is automatically sent to the user’s iOS device to alert them to the danger and enables them to call 911 directly from the app.

Complementing the new smoke and CO sensor is the Onelink CO monitor. Also featuring built-in temperature and humidity sensors, it provides a simple way to monitor a home’s environment. A multi-color LED ring changes color to indicate shifts in temperature, from blue for too cold, amber for too warm, white for correct temperature and bright red to indicate a CO emergency.

Wi-Fi technology provides instant notification of changes to the user’s iOS devices.
iOS-based environmental monitoring and control is also supported by new Onelink Wi-Fi Thermostat. This smart thermostat also has a multi-functional, easy-to-use programmable touchscreen that doubles as a digital picture frame. It also comes with customizable backgrounds, including the user’s own photos and more than a dozen pre-set themes.

Pricing for the Onelink products range from about $80 to $120.