Cutting-edge technology makes life at home pretty sweet for Salty. But it’s because his day job keeps him on the road so much that MLB catcher Jarrod Saltalamacchia (the guy with the longest name in baseball history has a very convenient nickname) began exploring how a high-tech makeover could benefit his family’s West Palm Beach, Fla., home. Salty doesn’t need to think about the threat of stolen property—and the safety of his family—while he tries to stop stolen bases during the season, and a beefed-up security system delivers peace of mind whether he’s “home” up in Boston or on a Red Sox road trip.

So security and remote surveillance and command were a big impetus for what turned into a full automation and A/V installation performed by Structured Home Solutions of Sherman, Conn. Turns out that just about every aspect of home’s new technology, which centers around an Elan g! control system, is a hit with this baseball family.

“As a family (Jarrod and wife Ashley have three children) we enjoy waking up to music every morning, so it’s always a race to turn on the system. It also gives us great peace of mind—whether it’s the self-alarming security, the automatic night lighting or the extra set of eyes with the camera system, we have peace,” says Jarrod, who’s now in his seventh MLB season. “At first we just wanted a better way to control TV and music for the whole house, and g! definitely blew me away with how easy it is to use. My 5- and 6-year-olds figured it out as fast as I did!

“Now we have one remote that does everything—all the TVs, speakers and lights, the air conditioning, security and surveillance cameras—or we can use our iPads and iPhones, which comes in pretty hand, too.”

Structured Home Solutions’ Dave Febbraio met Salty while he was working on another project—for Jarrod’s brother-in-law in Connecticut. It was while the then-Texas Rangers player was staying at the house during a trip to play the New York Yankees, and Febbraio was in the process of upgrading the existing control system to Elan g! for more functionality and controls.

The Connecticut system was given more lighting capabilities, double the amount of previous audio zones, streaming music support and better controls over everything. Small talk about who Febbraio was and what his company did turned into basically a technology demonstration that quickly caught the catcher’s attention.

“He had known his brother-in-law’s previous system but really was playing with it for the first time while it was a g! system. I remember going through the controllers, and he was definitely interested in it,” Febbraio says. “I think his interest was sparked by wanting some sort of audio system like that down at his own house, only he had no idea where to go or how to get it. … I showed him a lot more options, while standing with a touchscreen to select all the different rooms from one central location and he was surprised and impressed by that.”

Related: 9 Things to Consider in a Home Control System

On another, more formal meeting in Connecticut, Febbraio showed Jarrod and Ashley more about the g! system, including demos that allowed him to put the real all-purpose controller in their hands—Apple’s iPad. Using the tablet, the Saltalamacchias were able to peek into two homes (Febbraio’s, as well as an Elan demo site in Massachusetts) through surveillance cameras viewable through the g! system interface. That resonated like hitting a baseball right on the bat’s sweet spot for someone who’s away from home as much as Salty. 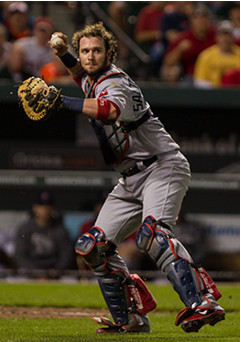 “Obviously, with all the travel he does, he was very much looking forward to always having cameras and his security system at the ready on his phone,” Febbraio says. “He had cameras already, but he needed a laptop to log in to see them and hardly anybody’s carrying around a laptop anymore. Now he’s happy he can sit in the clubhouse and look at his iPhone and see cameras.”

Febbraio and Structured Home technicians Andrew Orzech and Chris Kelvin made two trips to Florida to pull off the whole-home installation last winter. Planning for a robust control and A/V system isn’t the easiest thing to do being more than 1,000 miles from the site: Febbraio says they managed to ship all of the Elan gear, the Middle Atlantic equipment rack and the architectural loudspeakers; they got the wiring, Lutron lighting parts and Elk security pieces from an A/V distributor in nearby Boynton Beach; and they loaded up their checked baggage with as many tools as they could fit.

Structured Home spent five days on their initial visit to the Saltalamacchias’ home, mainly working on the wiring and the A/V system during that time, and spending the second trip implementing the lighting, security and other tweaks. In all Structured Home wired for nine audio zones and eight video zones. Pandora and Rhapsody streaming services are the main music sources, while the previously installed DirecTV system (after some re-jiggering) feeds 13 TVs, including a 70-inch Sharp LED centerpiece TV inside plus three LG LCD sets outside.

“We did the recon for everything else he was going to want—we knew right away the security needed upgrading—and went through the lighting to see how many loads there were, what kind, what size,” Febbraio says of the first visit. “We ended up having to fix the DirecTV wiring, and fix everything else because the low-voltage in the house was just a mess. Jarrod warned us that he didn’t have luck with other installers, and it was quite a mess in the attic.”

Related: What to Look for in a Professional Integrator

Of course, living in Florida not only puts Salty closer to Boston’s spring training facility in Fort Myers, but also allows him to take advantage outdoor living rather than being snow-bound inside during Massachusetts winters. Being able to easily turn on/off and command any of the outdoor TVs, along with the audio to play with them (whether it’s the corresponding TV audio or streaming background music instead) from one control interface has been a big winner for the Saltalamacchias.

“The whole family loves the outdoors, so we spend a lot of time in the backyard. That’s why I wanted to add the outdoor TVs and a nice living room-style area on the porch,” Jarrod says. “The outdoor speakers sound great and they make it just as nice to watch a movie or a football game on the porch as in the living room, so I never miss a play when I’m barbecuing or playing with my kids.”

On the second go-around, Structured Home Solutions installed the lighting control and security systems, which makes sense because the two really go hand-in-hand. Overall the home now features 12 zones of Lutron lighting and 22 zones of an Elk security system, with those key players also managed by Elan.

The Saltalamacchias had some exterior lighting as well as some “big wall-mounted exterior timers, that you kind of have to set as daylight changes, plus anybody that knew those were there could essentially set your lights off,” explains Febbraio. So one of the tasks Structured Home completed was eliminating those from the lighting system, taking the timers out and feeding all of the circuits inside instead. Structured Home then tied the Lutron system to a sunrise/sunset timer whose astronomic clock automatically changes throughout the year, and other changes can be made through the g! interface.

“The most unexpected benefit of the system is how easy it is for me to use from anywhere—I can be in Boston, Fort Myers (the Red Sox’ spring training home) or at home to do this,” Jarrod says. “All of the little things I used to have to worry about, like setting timers and the alarm every night are no longer a hassle. Now when we’re settling in for the night my wife and I don’t have to walk around the house to make sure everything is off, we can do it right from the couch on the iPad.”

There are two main “scenes” that govern the lighting system—HOME (or “stay” mode) and AWAY, which cater to the security tie-in. In AWAY mode, for instance, the system is preset to turn on and off interior lights at different times to make it appear the house is occupied, while security lights outside also go on. On the other hand, as Jarrod or Ashley enter the house, as soon as someone disarms the alarm system it triggers the HOME lighting mode (whose settings can also be changed on the fly) so certain zones go on/off or are dimmed. One area that’s benefited from the ability to dim is outside by the pool, whereas before the lights had to be at an un-neighborly full blast.

For someone who makes a living by using signals—whether he’s flashing them to pitchers from behind home plate or receiving them from the third-base coach when he’s at the plate—Salty had no problems learning the signs, or icons, of the g! interface. Between his first and second visit, Febbraio noticed that the Saltalamacchias had already added about 30 stations to their streaming music services, a good sign that the family was not only enjoying their new electronics digs but that they were very comfortable with the new system. In fact, it’s the simplification of their home’s electronics into one interface, which can be controlled through handheld Elan remotes or Apple devices, that really knocks the system out of the park for the Saltalamacchias.

“I didn’t realize how much time we spent using all the different remotes [before]. It’s so much simpler and faster to do basic things with the g! system,” Salty says. “The only challenge is training ourselves to use it for everyday things and break our old habits. It’s like instinct to get up to turn off a light. … Is it a little different living with the system? Yes, and it’s better.”

And just like sports, the new technology’s biggest fans might be kids. “They just think the whole system is so cool! They’re growing up with iPhones and iPads, which is totally different from my childhood, and watching the lights and TVs go on from just tapping on these devices is basically like magic to them. I love that it’s easy enough for them to use and, of course, they’re excited to be able to do things the same way Mommy and Daddy do.”