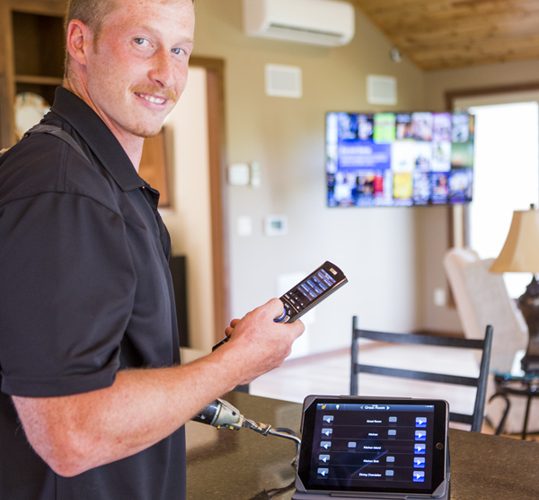 One moment can change everything. For U.S. Marine Corps Cpl. Mark Litynski, that moment happened on November 19, 2010.

It occurred during Mark’s second deployment in Afghanistan. One night, he volunteered to be the pointman on a foot patrol and stepped on an improvised explosive device (IED). When he woke up, Mark had suffered a bilateral above-knee amputation and amputation of his left forearm.

Although he was up and walking on prosthetics just two months after his injury, there were everyday tasks around the house that were more difficult to master.

Two years later, Mark was featured on Huffington Post, where he caught the eye of Gary Sinise. The actor then decided to build Mark and his wife Heather a place complete with smart home systems that would allow the couple more freedom—as well as provide additional comfort.

“I saw a video that Huffington Post produced, ‘Hidden Wounds,’ that featured Mark and Heather sharing their story,” Sinise explains. “It was my first strong awareness of what they were going through and I knew that I wanted to look into building them a smart home.”

Through the Sinise Foundation’s R.I.S.E. Program, this specially adapted home was made with all of the high-tech features befitting a true American hero. More importantly, these smart home systems have made the triple-amputee’s daily life much easier.

With Mark’s mobility in mind, the house was designed with extra-wide hallways, pull-down cabinets, and large windows so Mark could enjoy the woodsy surrounding area. It also has Elan Home Systems to anchor several smart home systems throughout the property.

Two QMotion Qconnect systems and 21 QMotion Advanced automated roller shades can open and close the home’s window coverings at the touch of a button, all so Mark can take in that wilderness landscape. There’s also a security system with six Linear IP indoor/outdoor cameras. Those whole-house sneak peeks will definitely come in handy when the couple welcomes their first child next month.

However, it’s the high-tech perks that make Mark’s everyday life easier that are most impressive. The cameras, the AV, and the rest of the smart home systems can all be accessed through the Elan app on Mark’s smartphone or iPad. If those aren’t accessible, there are Elan gHR200 remotes and four Elan gTP7 in-wall touchscreens throughout the house.

Besides focusing on what would improve the couple’s home life, one of the challenges of the installation was how to handle the brutal winters in Duluth, MN.

“We were nervous about the remoteness of the location and the delays that we could have possibly incurred due to extreme weather conditions,” says Scott Schaeperkoetter, senior project manager. “Thankfully, the contractor, Pete Franzen of Legacy Custom Homes, did an amazing job working through the hard winter months and delivered the home ahead of schedule.”

However, it wasn’t just the weather during the install everyone worried about—but for years to come as well. In order to keep power up and running, the integrator installed two Panamax M4315-Pro power conditioners and a BlueBOLT-enabled Panamax MB1500 uninterruptible power supply and power conditioner for the home theater.

“This home will allow me to be more independent,” Mark says. “It probably sounds so simple to someone else, but I can’t describe the feeling of being able to do something yourself that you once couldn’t. The simplest task can be enjoyable and you want to do it again and again, just because you can. I feel I have been blessed a thousand times over and beyond of what is enough.”