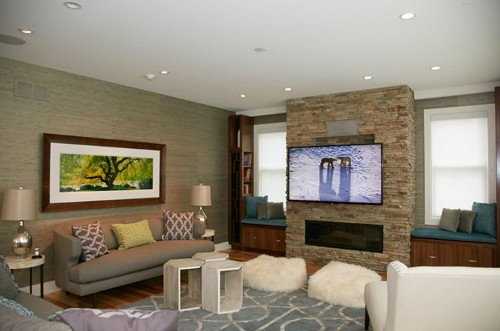 IT ALL STARTED WITH A TINY, DILAPIDATED 800-SQUARE-FOOT HOUSE in the historic Frank Lloyd Wright district of Oak Park, Ill. Other than its revered architectural style, there was nothing remarkable about the residence, which owner Shireesh Reddy purchased on a short sale a few years ago. Despite the outward appearance of the rundown residence, he saw potential in this tiny dwelling, and hatched grand plan to turn this 1880s eyesore into the epitome of modern convenience.

Over the course of three years, Reddy would add 6,000 square feet to the back and basement of the existing structure and integrate an amazing array of jaw-dropping, family-focused technology, including a translucent kitchen island that illuminates from within, a meditative sunroom blanketed with relaxing music from unseen speakers, and a button that gets the entire house ready for a “dance party.”

Reddy, who also happens to be the owner of local home systems integration firm Digital Living, was able to utilize his high-tech skills and knowledge to test drive a wide variety of innovative electronic systems and components to see how they handled under the rigors of his busy household. “This home and the technology became kind of like a concept car,” he explains. “I added features that are not part of my normal business practice, but that would demonstrate some of the more interesting and novel things you can do with technology.” Plus, it would provide Reddy with a fully operational showroom of sorts to which he could bring potential clients.

Make no mistake, though. This extensive project was all about family first, business second. Every component was selected, designed, and installed by Reddy with his wife and kids in mind—and also with deference to the historic nature of the dwelling. Reddy respected the local historical society’s mandate that nothing about the home’s faÃƒ:§ade be altered, and inside he managed to infuse an amazing breadth of modern technology while maintaining the integrity of the home’s original design.

Take the 65-inch Sony 4K flat-panel TV in the living room, which Reddy refers to as a “quadruple effect,” where aesthetics, acoustics, visual impact, and structural elements were all taken into consideration during its installation. Attached to a motorized arm from Future Automation, the display accomplishes several important tasks. First, it is able to lower from its resting location above the fireplace mantel into perfect viewing position on plane with the couch. As it moves to this preset spot, a speaker is revealed. Reddy explains that a beam in the ceiling had prevented him from tucking the speaker into the more traditional location in the ceiling, so as an alternative he recessed it into the stonework of the fireplace directly behind the TV’s resting place. “You can only see it when we’re using it,” Reddy says. The remaining speakers of the room’s 7.2 surround-sound setup were able to be tucked into the ceiling and hidden inside cabinetry. Motorized QMotion shades join the transformation by lowering automatically over the windows as the TV activates.

Light fixtures are one of those household amenities that people expect to work the instant they flip a switch or, in the case of Shireesh Reddy’s home, tap a button on a Vantage keypad. Each room in the Reddy house was outfitted with its own keypad, the buttons of which were programmed to control a certain group of lights. While Reddy and his family are free to initiate these lighting scenes from an iPad or touchpanel, doing so requires swiping through a menu to get to the appropriate controls—an acceptable practice when they want to turn off all the lights before bedtime, but not when they stroll into a room and simply need some light. Here’s where keypads become an important element to maintaining convenience and comfort in a smart, high-tech home. They complement the more comprehensive menu-based dashboard of a home automation touchpanel or app by providing quick, easy, on-the-spot control. And their sleek, modern style looks a lot better than a row of old-fashioned toggle light switches.

Controlling the A/V in this room and throughout the house (there are 16 listening zones and four TVs) is handled easily from a variety of devices, including wall-mounted touchpanels, Elan handheld remotes, and an Elan g! app accessible on the family’s iPads and iPhones. Signals from these devices are transmitted to an Elan g! home automation processor which converts them into commands that the equipment can understand. And it’s not just the audio and video equipment that listens for edicts from the Elan g! system. Reddy programmed the system to also choreograph the operation of the home’s extensive architectural lighting system from Vantage, motorized draperies from QMotion, a comprehensive security system from Elk, surveillance cameras from Speco Technologies, nine thermostats from Aprilaire, three electronic door locks from Yale, and an irrigation system from Hunter Industries.

Reddy purposely chose products and systems from a wide array of manufacturers to not only provide his family with best-in-class products but to also maximize the integration capabilities of the Elan g! system. Integration of this level also allows the family to monitor, manage, and operate this diverse collection of technology synchronously from any Elan g! touchpanel or iPad app. One tap of a button, for example, can launch a string of commands that sets up every aspect of the home environment—lights, security, window shades, temperature, music, and more—for breakfast, bedtime, or one of the family’s favorite pastimes, Dance Party.

When Dance Party is cued, the Elan g! system pulls out all the stops. “It was custom-designed for my three little girls to dance to their favorite music as it plays through every speaker in the house,” Reddy says. “It’s a feature that really shows how much fun technology can be for the entire family, and we use it all the time.” As much as the Reddy family loves loud, festive music, which they can access from a Sonos wireless audio system through the Elan g! app and touchpanels, they relish moments in their busy lives when they have the opportunity to sit back and chill in a quiet, restful environment. The Elan g! system was configured by Reddy to deliver this sense of calm, too, and focuses this meditative energy on one room in particular—the sunroom that is part of the home’s original structure. The focal point of the room, a 10-foot long panoramic photograph of the ocean by landscape photographer Peter Lik, is accompanied by a special piece of audio curated by Reddy himself. A tap of the Ocean button on a sleek Vantage wall-mounted keypad (see sidebar) cues up an audio track of the sound of crashing waves and signals the lights to accent the art and soften the room for a calm, peaceful environment.

This tranquil setting is the perfect place to end the day, as the Elan g! system preps the house for the evening—closing the shades, locking the doors, activating the alarm system, and switching off all lights but the few that softly illuminate the way to the upstairs bedrooms and to the kitchen, where Reddy and his wife might grab a late night snack before turning in. Here, an Elan g! touchpanel that’s recessed flush with the surface of a cabinet, lets the homeowners take one last look at the status of the many electronic systems that work together under the g! automation platform to simplify and add a new degree of enjoyment to their lives. EH