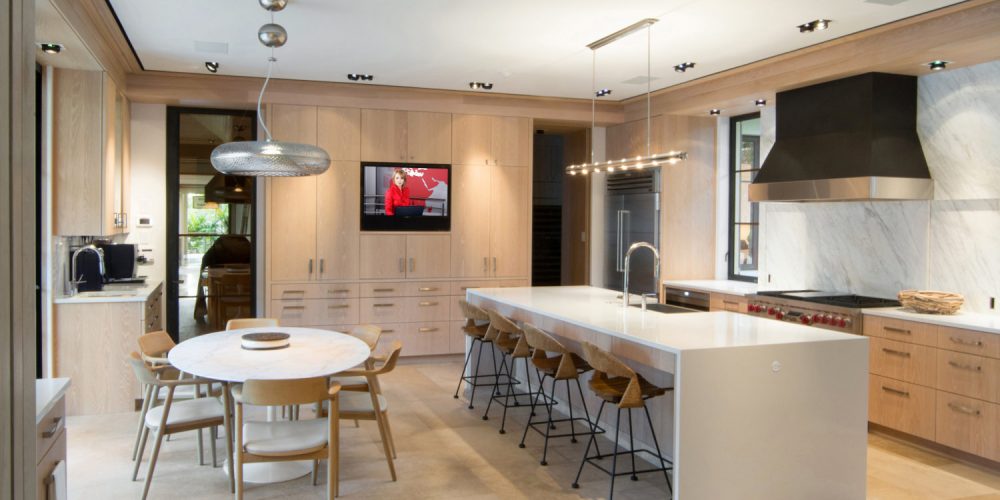 Suzanne and Irl Engelhardt love entertaining – so much so that they have set up their extraordinary home largely for that purpose.

“We bought kitchen towels that say, ‘Guests of our guests may not bring guests,’ but we’ve broken that rule,” Sue Engelhardt says. She has held parties for their grown children, for their friends, for employees, college alumni, even her book club from St. Louis. “I love to have people come and stay,” she says.

The five-bedroom house is unusually long and narrow. Most rooms have windows on two or three sides plus private patios. “We might have eight guests each in their own areas – but when they’re ready to socialize, they all congregate at the center of the house.” 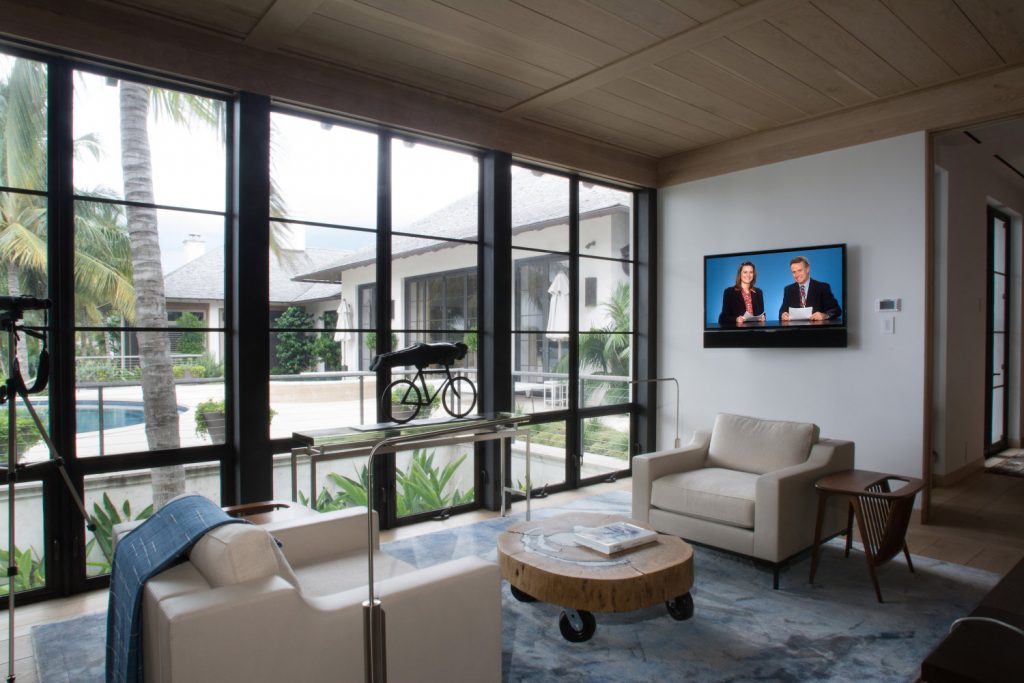 The center is a beautiful living room, kitchen and dining area, with floor to ceiling windows that retract, on both sides, to bring the outdoors inside. Here the Engelhardts and friends can lounge in the sun, eat, talk, watch movies, or binge-watch Netflix. “After dinner, we always love to watch something, whether an action movie, a drama or Downton Abbey. We take turns deciding what it will be, but we watch it together. It’s a form of bonding.”

Sue Engelhardt says she and Irl bought their original property in Naples in 2003, but after retirement they were able to purchase the adjacent lot, tear down their existing house and build something special.

“I knew nothing from a technical point of view, but I know good design,” she recalls. She found Vero Beach-based architect Clem Schaub and loved his designs. “He grew up in Puerto Rico and enjoys the tropical lifestyle,” she says. “He understands that if you’re in Florida you want to be outside.” 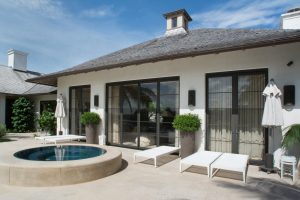 She had trouble finding a good technology integrator, but Schaub recommended Will Gilbert of Fort Lauderdale-based Think Simple. “I felt comfortable with Will. He’s very open with how they will build something and transparent about pricing. If I would say, I really want this to be this way, he would always find a way to do it.”

The living room is something special. Schaub and Think Simple designed a media system with a JVC projector, James Loudspeaker surround sound and a huge projection screen, but hid everything in the ceiling and behind a beautiful piece of fabric art by Olga de Amaral. But because the family hates to close draperies, Think Simple also installed an 80” Sharp TV, a better option when the room is bright. Press a button on a handheld remote or iPad and the artwork rolls out of the way to the right, revealing the TV or lowering the screen and projector. “It’s really cool,” Sue says. “You can’t even tell they are there.”

Sue says she was surprised and impressed when the Think Simple people came back after the audio system was installed and tuned each room with Crestron’s Surround Sound Tuning Kit, using a microphone to compare the sound coming from the speakers with a reference tone generated by a computer. “It’s night and day how much better it sounds.” 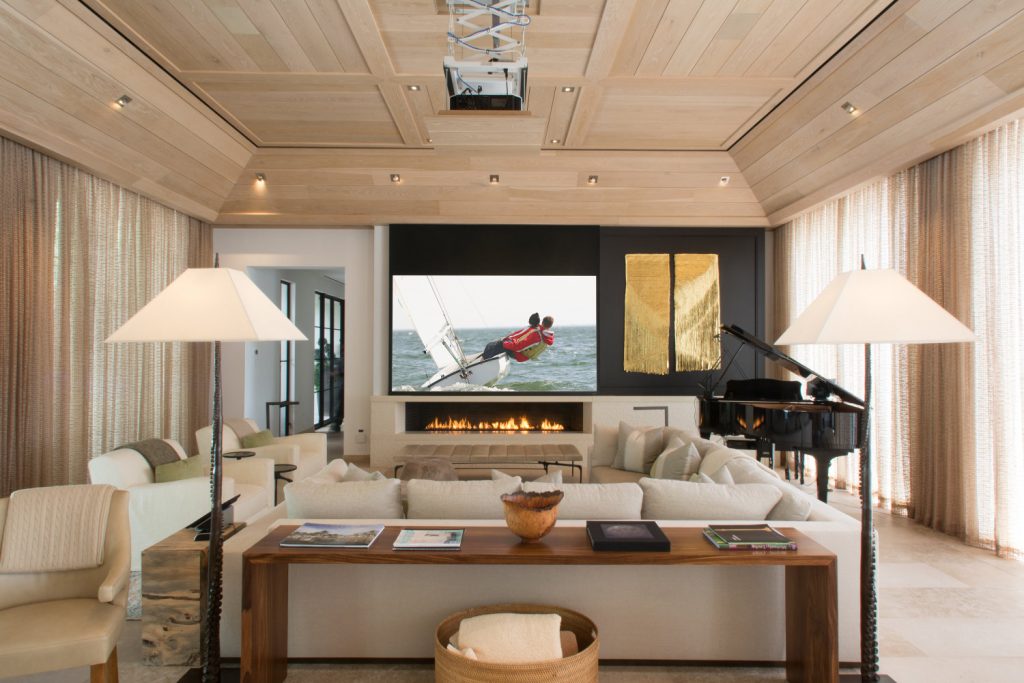 As concerned as she was about sound and image quality, Sue did not want to look at the A/V equipment when she wasn’t using it. Think Simple installed an equipment rack in the attic, mounted speakers in the ceilings, and hid TVs in cabinets whenever possible. In the master bath, they installed Seura mirror TVs, which disappear when powered off. If someone wants to play a movie or song list from a phone or tablet, they can connect wirelessly via AirPlay. The sound system defaults to the room they connect from, but it’s easy to play music in multiple rooms or throughout the house.

Getting the details right was a bit of a challenge. Gilbert says he had the bathroom vanities custom built so that the glass would match the glass in the Seura mirrors perfectly. “We also had to use linear actuator motors in the living room to keep from damaging the artwork,” he adds.

Think Simple owns its own “CNC” computer-controlled lathe and milling machine, which they used to build bronze plates for security cameras and wood plates for some of the outdoor lighting fixtures, all of which exactly match fixtures chosen by Schaub interior architect Christine Pokorney.

In addition to the A/V systems, Think Simple installed the home network, a home telephone system including a cellular antenna, and Crestron controls to integrate the security, lighting, shading, climate and A/V, coordinating with the family’s security and IT suppliers based near their main home in St. Louis. 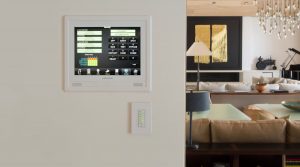 “The name of the company [Think Simple] is interesting,” Sue says. “As technical as they are, they really do make it very simple for the end user. I was impressed, too, with their service after the sale. I was watching a movie with some friends one evening and something happened – the movie just quit. I called Will, and he fixed it immediately by connecting remotely to my house. We went right back to our movie.”

“The Think Simple people are all kind of nerdy but a good nerdy,” she adds. “They are all truly excited about what they do, and they are always looking for the next thing that will be great to use in a home.”

That’s one reason she recommended the company to a neighbor down the street. But the other is simply that she loves her integrated home. 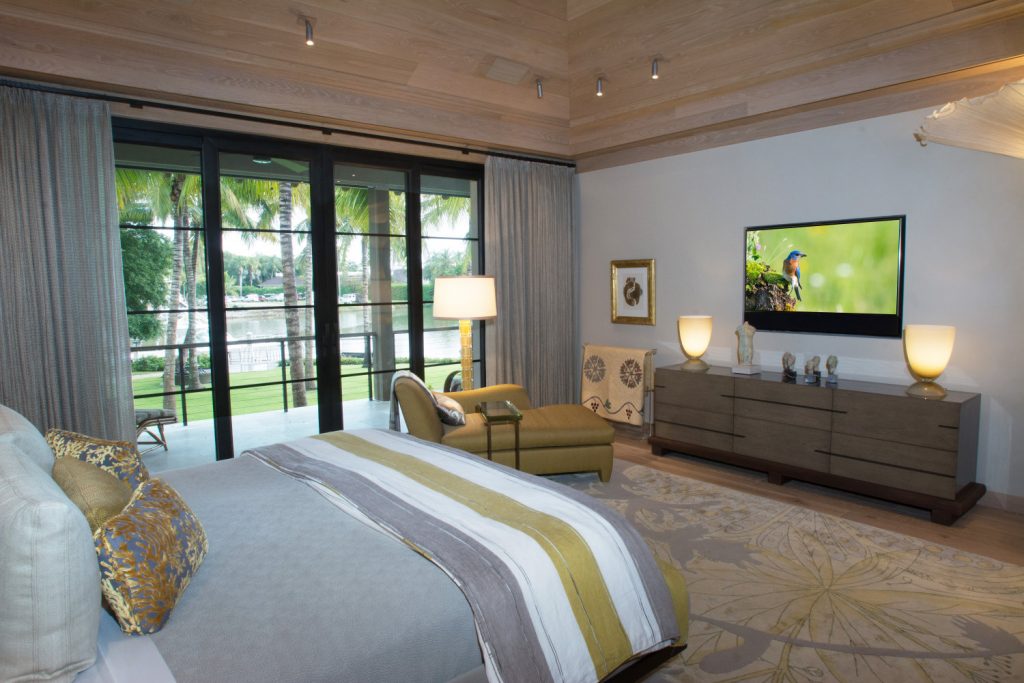 She says her son is building a new house now and she told him to be sure to include an automation system. “I said, ‘Do it now before the house is finished. You’ll be really glad you did.’”