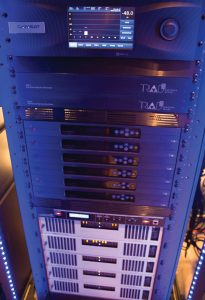 There are many so-called hidden A/V installations in which the gear is camouflaged, disguised, or otherwise concealed. Of course, the true identities of these systems are often given away by the distracting speaker grille or odd wall wart. Not so for this remarkable residence—the 2014 Tech Home Builder CEA (Consumer Electronics Association) Mark of Excellence Award Winner for Multiroom A/V Project. It makes good on its claim of invisible electronics integration. In this upscale, 6,500-square-foot, 13-room condo at a South Florida Ritz Carlton, an impressive music, movie, lighting, and shade system goes largely undetected.

To accomplish the formidable task of achieving both goals, BPS had to think outside the box and do things that had never been done before. Normal in-wall speakers simply weren’t going to pass muster, for example, so BPS built the speakers inside the wall, working directly with speaker manufacturer Triad to modify the speaker’s design to elicit the best possible sound from a relatively narrow wall cavity in the media room. But they didn’t stop at that: BPS chose to power these custom Triad speakers with high-end lab.gruppen amplifiers.

“It’s unusual to power an invisible speaker with very high-quality amplification, but the homeowner wanted concert-quality sound. We accomplished this with a little creativity and some seriously good equipment, but those who enter the home have no idea where that sound is coming from,” says BPS owner and system designer Joel Maxell.

No expense was spared to deliver the same caliber of high-performance sound throughout the rest of the home. Sixteen pairs of these custom Triad speakers and the accompanying lab.gruppen amps were installed to achieve quality that was equally immaculate in every room, be it a bedroom or a bathroom. Credit South Florida’s penchant for concrete exterior walls and the specially engineered speaker enclosures for the impressive lack of vibration throughout the residence.

The entire whole-house audio and video system can be conveniently controlled from a Savant app on the owner’s iPad. The app also grants management over the home’s elegant custom LED lighting, beautiful motorized shading, and decorator-style Lutron light switches. What stands out here is that the system is extremely reliable, in large part due to BPS’s integration chops in the commercial A/V industry. Even the home’s Cisco Meraki network is enterprise-grade. Should something go wrong with the system, it can be fixed remotely, thanks to cloud-based companion software.

“Everything we do, we do in one installation. Usually, the only time we are called back out to a project is for upgrades,” says Roseman. “That’s because this particular system, like all our systems, was tested extensively before we even got it to the condominium. We make sure it performs exactly as it should well in advance.”

System reliability was another very important feature considering that this high-profile homeowner is also a frequent traveler. “Because the homeowner travels so often, it is critical that when he returns back home after a long stretch that he is able to touch an icon on his iPad and hear concert-grade sound without fail or compromise,” says Roseman. “The system has to work every time, even if it has been idle for months at a time.”

Judging from the significant investment the homeowner made in the A/V systems, not to mention the impressive top-dollar equipment list, extreme reliability was a very reasonable expectation. And judging from the level of innovation, customization, and careful attention to detail, this homeowner will be enjoying concert-quality sound for many years to come. EH