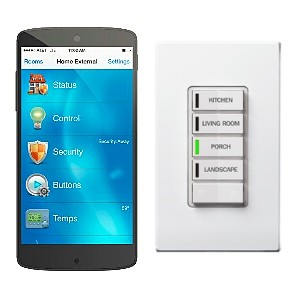 The answer is always yes, you can install home automation and smart lighting systems, it just depends on how much you do yourself, and how much you rely on a professional. If you’re ready to get started on your home automation system, ask yourself these key questions first.

Do you just want an app to turn on a few lights for a couple of lamps?

If so, then all you need is one of the several hub-based smart home systems on the market. These include a central hub, which functions as the brains of the system, and usually connects to your home network (some are wireless, some are not). The hub then communicates wirelessly with smart LED bulbs around your house (using one of several popular wireless methods), and you can dim the lights or turn them on/off individually or by group with a smart phone or tablet app. This is the easiest and cheapest way to get started in home control. Some DIY systems allow quite a lot of expansion, others not so much. Cost: $100 to a few hundred dollars.

Do you want the lights in several rooms, with a mix of built-in switches and a variety of lighting load types, all integrated into custom lighting scenes?

If yes, an experienced DIY-focused person may be able create a system like this with off-the-shelf devices. However, figuring out which kinds of dimmers will work with all of your lights may take more expertise. Also, if you don’t know how to turn off your electricity and wire in a new wall dimmer or switch, it’s best to call a pro. If you can do all those things, then the next question is how comfortable are you programming and designing scenes? Some DIY systems are very easy to program, while others use steps and language that may make it difficult for novices. Also, DIY systems are usually less customizable than professionally installed systems, and limit the number of devices or number of rules you can integrate.

Do you want just a lighting system, or are temperature control, whole-house music and security part of your long-term plans?

Many of the new DIY systems on the market allow some integration with devices such as smart thermostats and security cameras, but they may limit your choice, or limit the functionality of the devices. Do your research first to make sure the devices you want are compatible with the system you’re interested in. In fact, it’s more important to decide on the features and functions you want, rather than the device you want. A certain popular thermostat or WiFi camera may sound good to you; however, a lesser-known one may do all the things you actually want to do, and have better integration capabilities with the automation system. Also, it’s worth considering that the latest new smart home company may not be around in a year or two when you decide you want to expand your system. It can be safer to pick products from a company that’s been in the business for a while, rather than the newest thing to launch a crowdfunding campaign.

How many apps do you want to use?

One of the best things about home automation is the ability to take multiple devices and multiple systems and integrate them so they work together. While many of the popular off-the-shelf Internet of Things devices work well with your smartphone and are easy to use, they don’t often work together, so you’re left with multiple apps and multiple interfaces. If you need one app to open your motorized window shades, another to turn off your smart light bulbs and another to adjust your temperature, then you don’t have home automation. You just have wireless control. An integrated system that puts all those devices on the same app can be done with some DIY platforms, but it’s more reliably done by a professional installer.

Looking to install a home automation system? Find an Installer Near You