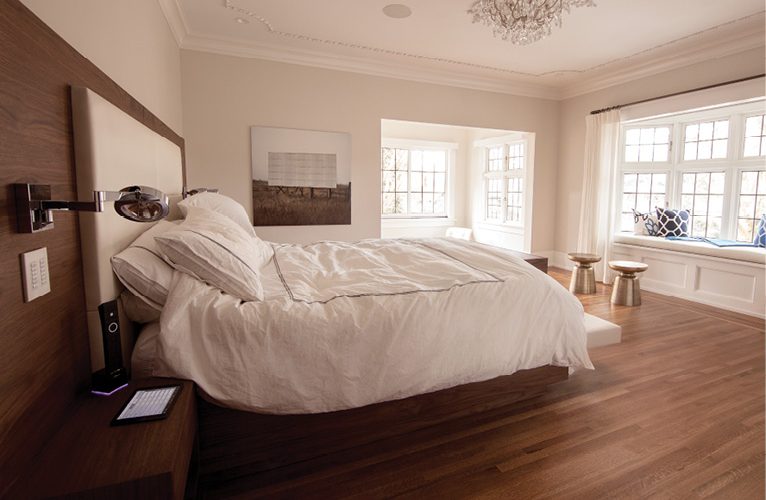 WHILE A TOTALLY TRICKED-OUT BEDROOM might seem like overkill to some people, to this businessman and owner of a 4,200-square-foot remodeled heritage home in western Canada, every stolen second, every time-saving device, and every efficiency is a blessing. Giving him the ability to be the boss of his automated home was simple thanks to the Vancouver-based custom electronics (CE) professionals at New Space Technologies, who programmed routines into a Crestron automation system, based on the homeowner’s lifestyle.

With the tap of a button on a keypad, handheld remote or tablet, the owner of this automated master suite can change the environment in seconds.

“Many people don’t realize that using an iPad or smartphone to control video isn’t always a great solution,” says Tavish Macdonald of New Space Technologies. “iPad control requires that you use two hands and open an app just to get to the controls. We make sure that if you misplace your device, there is always a hardwired interface available.” New Space Technologies gave this homeowner the best of all worlds by providing him with an RTI remote for the video, an iPad running the Crestron app and a Crestron on-wall keypad for totally flexible control.

The command work morning, for example, which the owner can initiate from his iPad, turns on the audio system to a low volume and opens the motorized shades in the master bedroom and bathroom, but it keeps the en suite bathroom shades lowered for privacy. Next, the system lights a pathway to the kitchen, and then from the kitchen to the garage. “This gives the homeowner a little bit of light to put on his suit, get a bite, and get to the car,” says New Space Technologies project manager Tavish Macdonald. a weekend morning routine, on the other hand, keeps all the shades down, triggers low lighting scenes at a certain time, and tells a Nexus 21 motorized lift to bring a 46-inch Samsung TV into view from the inside of a footboard and to switch to CNN. Other presets, like go to bed and sexy time are also only a swipe away.

Of course, after a busy day, the owner can relax in this master suite sanctuary minus visible signs of technology to disrupt the vibe, save for the two Definitive Technology in-ceiling speakers and a few control devices, including a couple of wall-mounted Crestron keypads.

As part of a preprogrammed good morning setting, the lights in the master bathroom adjust to the perfect brightness level.

“The room has a clean and timeless look, and the homeowner didn’t want anything to detract from the feel of an elegant master suite,” says Macdonald. “That’s why there are no TVs on the walls and no big speakers too look at.”

All the control and A/V distribution equipment is courtesy of Crestron, and Macdonald used Crestron shading with silent QMT50 motors in both the bedroom and en suite bathroom. “Because the house features old materials, over-average ceiling heights and unique moldings, we used Crestron’s Sonnex EQ to get the best sound properties from the bedroom,” says Macdonald.

Remote control using the Crestron app means that if the homeowner forgets to turn off a light or close the shades, he can simply log on via his iPad from anywhere in the world. And for a busy business professional like him, this form of control is a necessary convenience.—KR EH