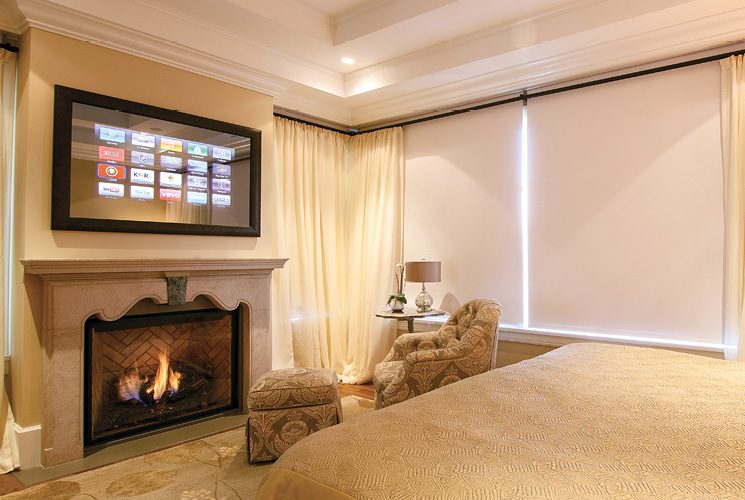 WHILE SOME PEOPLE think of retirement as a time when boredom sets in, others embrace it as an opportunity to enjoy the fruits of their lifelong labors. The latter was the case for the owners of our gold award-winning master suite, who wanted to design the ultimate retirement abode from the ground up, exactly as they wanted.

Formwerks Architecture, Vancouver, B.C., had worked with area custom electronics design and installation firm New Space Technologies on previous projects and brought the company into the mix for its ability to make complex home technology simple to operate, a major plus for this couple in its retirement years.

A few finger swipes on an iPad is all it takes to transform this master bedroom: a Séura TV switches from a mirror to a video display, motorized draperies close, and the lights dim.

Nowhere is this more apparent than in the master suite, in which a Crestron system allows the homeowners to control the entire 6,000-square-foot house while also enjoying high-tech amenities in the bedroom itself.

They can control the fireplaces throughout the house, including the one in the bedroom, or see who is at the front gate by monitoring any of five security cameras positioned around the property. “When a guest rings at the gate, the corresponding camera pops up on the master bedroom’s TV or the Crestron touchpanel so they can have a quick glance at who might be there,” says New Space Technologies systems designer Tavish Macdonald. “From that same control page they can buzz the guests in through the property gates.” Similarly, they can see any open doors or windows throughout the house in large, easy-to-read text.

Additionally, a Crestron lighting system handles more than 90 lighting loads. Engraved backlit buttons on wall panels let the homeowners easily read buttons in the dark. New Space created a House Power Down command that can be initiated from a panel to fade out the lights, turn off any A/V zones that may have been left on, shut off fireplaces, lock gates, set the HVAC system to the ideal sleeping temperature, and close the motorized shades in the bedroom—all at the swipe of a finger.

If the couple wants to enjoy a little entertainment before bed, they can do so on their easy-to-use, and stealthy, bedroom A/V system. “They wanted clean, easy-to-use video and audio entertainment and felt overwhelmed by controlling all of these systems independently,” says Macdonald. “The full distribution of the entertainment is centralized and programmed so that the clients only have to interface with one remote in the bedroom.” An Apple TV was a last-minute addition at the request of the couple’s daughters, and the homeowners now use it to watch Netflix.

Like any good bedroom installation, you have to look hard to see the gear. The Séura TV mirror display can only be seen when powered on, and the Definitive Technology speakers were carefully installed into the Venetian plaster ceiling to remain inconspicuous.

Move into the master bathroom, and many of the same high-tech amenities are there, including radiant floor heating and lighting control, along with flush-mounted temperature sensors. “The idea was to minimize the devices on the wall, so instead of having bulky thermostats, we created temperature up and down arrows on the lighting keypads.

The climate is layered through the lighting system,” says Macdonald. Now, the homeowners not only have warm feet during winter, but they can enjoy the beauty of a master suite that’s void of all the wall clutter that can plague some of today’s high-tech homes.

The end result went above and beyond what the homeowners originally dreamed of for their high-tech retirement home. The project is proof that if you make technology intuitive and easy to use, it can benefit even those who have not grown up with it. The happy retired couple is now poised to live out their golden years in the last home they will ever build, all in high-tech style.—KR EH

Perhaps the biggest challenge when automating this home was consolidating the two desired HVAC systems under one control system. The homeowners wanted a radiant floor heating system but were concerned about it competing with the central-air system. For example, the walk-in closet, en suite bathroom, and master bedroom are all individual heating zones, but they operate as one complete AC zone. Under normal circumstances, these two HVAC systems could conceivably fight each other, with both systems operating at once. Thanks to a little automation, however, this simply can’t happen.

“We switched out the manual wall-mounted thermostats that were split for air conditioning and heating and consolidated the programming to reflect one set point value on the climate control pages [on the Crestron touchpanel],” says Tavish Macdonald of New Space Technologies. “This governs how the two HVAC systems operate in the background. We don’t allow the AC to come on when the house is in a heating stage, and we minimize the floor heating (but still keep toasty feet) when the setpoint is lowered.” Another big plus is that the couple doesn’t have to go into each room to adjust the different climate zones before bedtime—they can do it all from a bedroom-based Crestron touchpanel.