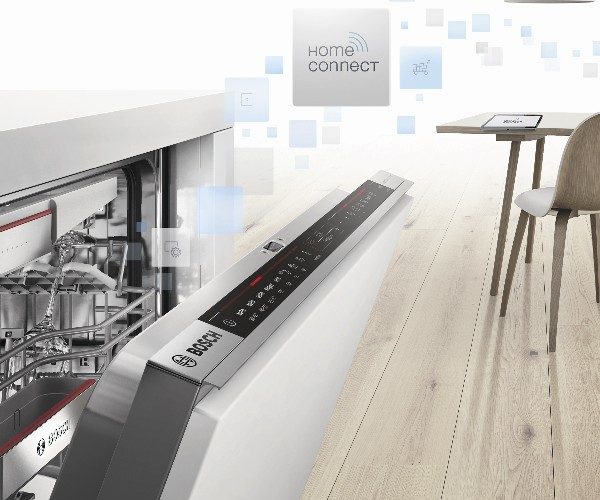 Imagine trekking to the grocery store only to realize that you left your list at home. Or that on your way to work you remember that you had left wet towels in the dryer. Bosch envisions a day when all you’ll need to do it check your smartphone to inspect the current contents of your refrigerator or to activate the clothes dryer. That day, at least for homeowners in Germany and Austria, is now, as Bosch unveiled this week a series of smart appliances at the International Consumer Electronics Show in Las Vegas.

In addition to the refrigerator and dryer, the line includes smart appliances including a dishwasher, washing machine and oven. The most compelling of the group, the refrigerator, is fitted with two small IP cameras, which snap a shot of the inside of the refrigerator every time the door opens. As many as 20 photos can be stored and access via a smartphone app. The idea, explained a Bosch spokesperson, is to provide an instant visual status report of the current stock inside so that users can see if they need milk, orange juice, or some other item while running errands. “Or maybe after work you decide to host an impromptu cocktail party at your house,” she offered. You can click on the app and see if you should swing by the store to pick up some beer and wine.”

The app controls for the smart appliances leverage the convenience having remote access to household appliances by allowing users to select specific cooking and cleaning settings, schedule activation times and by notified when the cycle is complete. Other offerings include recipes and cooking tips, operation instructions and videos, and remote diagnostics.

Making the connection even more convenient is the fact the all of the appliances can be monitored and managed via a single app rather than multiple individual apps.

Home Connect is currently available in Germany and Austria and will be introduced into a growing number of countries, including the United States over the next several years. The first network-capable products were oven ranges and dishwashers, launched in December 2014. Additional Bosch connected appliances will be available in Europe in fall of 2015, with more Home Connect app features rolling out in late 2015.