Apple Homekit vs Google Brillo and Weave, More Alike Than Not? - Electronic House ​​ 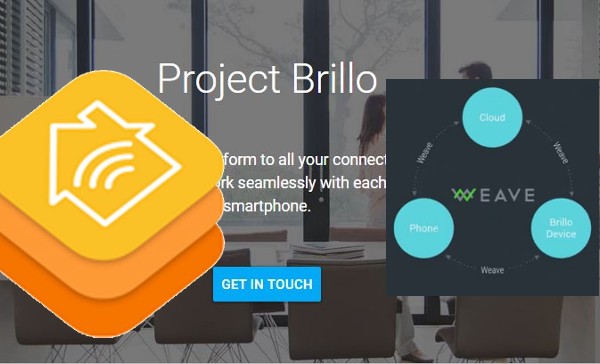 In 2014 Apple announced that Homekit was coming to iOS, and predicted that it would enable broader adoption and easier implementation of the Internet of Things in the home—the smart home. Now Google, which already had its hands in the home automation cookie jar (Google owns Nest Labs and Dropcam, and Nest is one of the founding member companies of the Thread Group), has announced its own smart home initiative, called Brillo.

If you like smart home gadgets (such as wireless door locks, light control systems and smart thermostats), Homekit and Brillo are systems designed to make those devices work better together on your smart phone or tablet.

Just as iOS and Android are more alike than they are different, Homekit and Brillo, at least for the moment, also appear to have a lot in common.

Both systems are, in part, solutions to the problem of device compatibility. There are lots of makers of home automation systems, but many of those systems exist on their own technology islands. Some of that is intentional. Back in the wired days, when home automation was more a web of cables then a mesh of radio waves, companies found it easier and more profitable to keep the communication protocols more or less proprietary. The expanding smart home market, especially on the DIY or off-the-shelf level, insists that things from disparate companies be able to work together. Some big kid steps have already been made, specifically with the recent updates to both Z-Wave and Zigbee, and broader adoption of Bluetooth Mesh (more about that in another article soon), but those are mostly still wobbly steps, like crossing a raging river on rocks. You might get across, but you’ll get wet.

To that end, both Apple and Google are taking similar paths to allow you to connect and integrate Internet of Things products across manufacturers and platforms.

Apple Homekit is a software framework that allows devices to communicate with each other via Wi-Fi or Bluetooth. In some cases, seemingly incompatible devices will still be able to be linked via compatible bridges or hubs (as in the case of Lutron and Insteon). Brillo, on the other hand is essentially the Android operating system, just stripped down to its core elements. As a version of Android, one would assume that it’s more robust in its features than Homekit. Brillo, like Homekit will allow devices to connect over Wi-Fi and Bluetooth LE. Brillo also works with another new Google introduction, called Weave, which is a communication layer (software) to allow connected devices to talk to each other in a common language—for instance, if device X is a door lock, and says that command Y means open, then all other devices talking via Weave will know that the lock is open.

A device can run both Brillo and Weave, or Weave can run on a device without Brillo. “Weave exposes developer API in a cross platform way,” explained Google SVP Sundar Pichi at the company’s I/O 2015 conference in May. It’s possible that iPads and iPhones could even connect to devices running weave, but that’s yet to be seen.

Voice control, largely laughed it when it first came out on smart TVs a few years ago, is going to be a big part of both Apple’s and Google’s smart home plans. Both Homekit and Brillo/Weave allow for voice control of the smart home. Homekit does it through Siri, which gives that system a little bit of a head start, because iPhone users are already comfortable using Siri to ask for directions or to find things online.

One thing to be clear about is that neither of these systems are communication protocols in the way that Z-Wave or Zigbee are. They use existing protocols, such as Wi-Fi and Bluetooth LE, but they only enable communication across a wireless protocol.

Neither technology requires the use of a smart home hub, though we know Apple Homekit will work with some hubs, and in that way increases the number of products a user’s system can work with. I’m especially curious to see if a smart home hub launches that’s based on Google’s Brillo from the ground up. There are already a few Android-based smart home systems (see here and here).

Like Homekit, there’s a lot we still don’t know about Brillo. Will there be a central app, perhaps a Weave app? Probably not. There will, of course, be individual device apps, and probably integration features within those apps to allow a user to add say, a Dropcam security camera to a scene with a Philips Hue light. There may be third-party apps that allow users to create more complex scenes or recipes for their smart home devices. There’s also the question of how much control Google will wield over app developers. Apple is historically more domineering over the apps on its platform, while Google takes a lighter touch.

Both Apple Homekit and Google Brillo have (or will have) device certification programs and logos to help buyers identify compatible devices.

There’s already a growing assortment of products that we know will work with Homekit when the system is launched (and some that have already launched). Companies are scrambling to be part of that club, because no one in the smart home market wants to be left out if Homekit is a huge hit.

HomeKit is here. How Will Apple Home Automation Be Different?

Brillo and Weave, on the other hand, are brand new names to the smart home world. The only products we know for certain will be compatible are Google’s own Nest devices. A Brillo-compatible Dropcam is likely to emerge too, because Nest purchased the Dropcam business in 2014.

While Homekit seems like Apple’s enhanced version of the IFTTT app to enable greater adoption of smart home systems, Google’s Brillo appears to have larger aims. Sure it will let you connect a Nest thermostat and a Wi-Fi door lock, but Google is looking outside the home too. Industrial farming and metro public transportation systems were two examples Google suggested at its I/O developers conference that could benefit from better Internet-of-Things level integration. Google, as a company, is always thinking big—consider the driverless car initiative and Google Earth.

Ultimately what both these initiatives mean, at least to me, is that smart home living is more than just a growing trend, it’s a sure thing. When companies like Apple and Google set out make an impact, the rest of the world feels it.