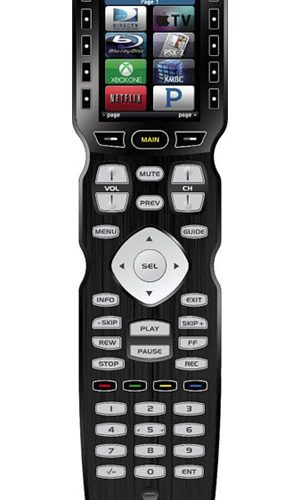 It was funny that in the CEDIA Expo website, URC is still listed as “Universal Remote Control,” but anyone who sauntered into its booth knows the company is much more than just the leading remote control manufacturer.

Proof positive was an array of new products debuting at the show, including new lighting control keypads and dimmers, a Z-Wave network hub, and, of course, an upgraded remote control.

The TRF-ZW2 and its predecessor both support the UI7 graphic user interface. The new UI7 interface is modern and attractive. It streamlines programming and general control of Z-Wave devices for both the dealer and end-user.

Also, it provides URC Vivido specific programming (e.g., Device Parameters, EZ Association, and Intuitive Instructions for including the company’s lighting devices). UI7 includes an end-user account wizard that makes it easier for an end-user to change lighting scenes and set up how they want to manage their account.

“Z-Wave is hot and our new gateway is even hotter. It’s potentially 20 percent faster than its predecessor and packs the very latest Z-Wave chipset into a super-small form factor. The new, ultramodern GUI allows end-users to set their own lighting scenes quickly and easily. And end users have the option of activating their private account to enjoy offsite access to Z-Wave control,” says Cat Toomey, director of marketing.

On the lighting front, the company announced several new components from its Vivido lighting system. The Vivido Wall Mount Five-Scene Keypad and the Appliance Switching Module join the RF Duplex Receptacle, Battery Operated Switch/Dimmer and a full assortment of dimmers and switches to round out the line.

Lastly, the new MX-990 remote control is the most advanced CCP remote to date. Emphasis is on creative customization as this remote allows programmers flexibility in graphic design and layout. Plus, graphics are stored on the remote and archived on a PC.