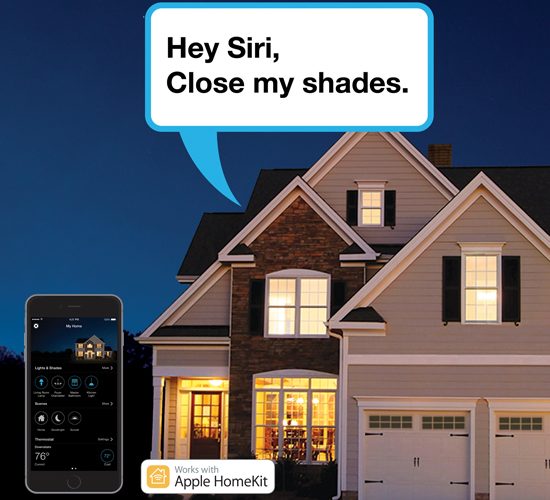 It seems like every electronic device has some sort of app component these days. Imagine if you could use that same portable to control all sorts of smart devices in and around the home—but using Siri. That’s the idea behind Apple HomeKit.

Of course, Apple HomeKit is not new to the smart home. Since it debuted back in 2014, manufacturers have been clamoring to release devices that support: Apple’s home automation platform.

That’s what this is, too. Apple HomeKit is the company’s smart home platform. Not only does it combine several different third-party manufacturers under one controller, but that same controller includes Siri—Apple’s voice-controlled, virtual assistant. That means you can bark out orders to your iPhone, iPad, iPod touch, or Apple Watch, and have your system respond accordingly, all without having to push buttons.

To date, we’re seen some pretty interesting announcements that would make Apple HomeKit very worthy of your home setup. At this year’s CES 2016, the idea of combining forces with Apple seemed as hot as ever. Let’s take a peek at eight manufacturers producing new Apple HomeKit-enabled devices you may want to add into your home this year.

Lutron
No one wants to run around the house to open and close shades. Now, with Lutron’s HomeKit-enabled Caséta Wireless Smart Bridge, no one will have to do that. Lutron is certainly no stranger to HomeKit integration. However, the company just recently added shade control into that wireless mix. If you have the DIY version of the Caséta Wireless Smart Bridge, you can use Siri and the power of your voice to control Serena battery-powered shades. Homeowners with the Smart Bridge Pro (a professionally installed version of the smart home hub) can use HomeKit to tap into Lutron Sivoia QS Triathlon wireless shades (both roller and fashion honeycomb styles), Sivoia QS drapery tracks, the Kirbé vertical drapery system, tensioned shades, pleated shades, and Roman shades.

iDevices
This connected company didn’t just announce one HomeKit-enabled product this year, but is making plans for four of them. Okay, technically one of them is the iDevices Connected App, which allows users to add third-party devices into any: iDevices setup. The iDevices Socket (pictured above) can easily control, dim, and tweak colors for any standard light bulb. The iDevices Wall Switch and Dimmer Switch can turn existing single light switches into HomeKit-enabled, smart light switches. And finally, the iDevices Wall Outlet can smarten up existing electrical outlets around the home, so you can control anything that’s plugged into them. Although none of the products are available yet, the iDevices Socket should be: coming sometime in: Q1 2016. The iDevices Wall Switch and Dimmer Switch will follow in the: second quarter, with the Wall Outlet arriving in Q3 2016.

Honeywell
In order to keep up with the Nests and ecobees of the world, Honeywell just announced the second-gen Lyric thermostat—and as you may have guessed, it includes support for Apple HomeKit. Besides tapping into temperature tweaks through Siri, the $189 WiFi thermostat can send out notifications, adjust temperatures based on outdoor conditions, and work with third-party devices. It even has geofencing features so the Lyric will know when you’re home or away, and adjust comfort levels accordingly.

Hunter Fan
Ceiling fans have been around for so long, it’s hard to think of them as “smart.” However, Hunter’s Symphony and Signal ceiling fans are going to blow away all other competition, thanks to the addition of WiFi and HomeKit. Packing in support for Apple’s smart home platform means that users can control each fan or even a group of fans using voice commands. It also opens the door for scenes, where one simple command can turn on the fan, lock the doors, and close the garage door. Both Symphony and Signal fans are expected to start selling in the spring, priced at $299 and $349, respectively.

Grid Connect
We just mentioned Grid Connect’s ConnectSense WiFi Smart Outlet as a new HomeKit-enabled option. However, the company also planning to add two HomeKit-enabled sensors sometime this year. The ConnectSense Temperature & Humidity Sensors are perfect for spots that won’t fit a thermostat, such as a basement, storage area, or greenhouse. The ConnectSense Smart Water Sensor will detect leaks in those same areas: (or wherever else you expect them to be) and alert users to activity on an iPhone, iPad, iPod touch, or Apple Watch. Each one has: HomeKit support, so you can check in on the sensor’s status or access settings with the sound of your voice. Both operate via: Bluetooth Low Energy and a pair of AAA batteries. Look for each sensor to start shipping sometime in the first half of 2016, with a HomeKit-enabled door/window sensor expected later on this year.

Kwikset
Smart locks freed up pocket space all over the world by making: key-free entry mainstream. Now, you won’t even need to lift a finger—literally. Kwikset announced plans for the Premis, the company’s first Apple HomeKit-compatible smart lock. This will allow users to lock and unlock the door through Siri voice controls. Besides remote control, the Premis can also be integrated with other HomeKit-enabled devices, such as lighting and temperature controls. Other perks: include options for up to 30 unique user codes, SecureScreen and Kwikset SmartKey features, and a white LED display.

iHome
The iSP8 isn’t this company’s first smart plug. However, this one does work with iOS, Android, Nest, Wink, and all sorts of other devices. Just plug it into any available electrical outlet and the iSP8 can control any connected device both in and outside of the house. Lights, fans, heaters, TVs, and more can be accessed through the iHome Control app. And that HomeKit support means that you can tap into those same devices via Siri voice control. The iSP8 is around for $49.99.