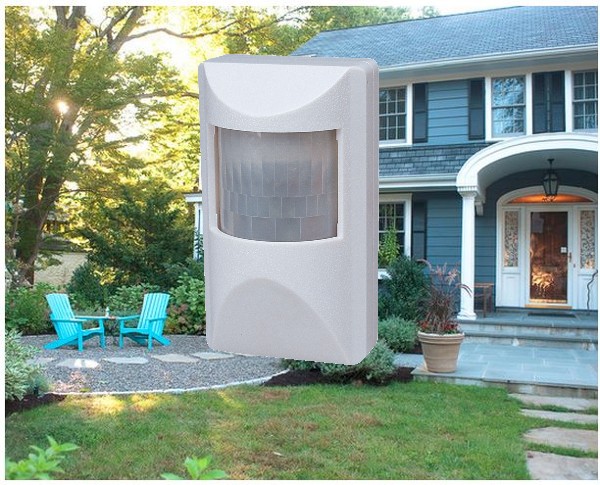 Motion sensors (also called motion detectors) have been used with alarm systems since the 1970s. Back then, motion sensors were based on ultrasonic technology. Sound waves were emitted from a sensor, and the resulting reflected sounds were analyzed to detect changes. When a change was detected, the motion sensor notified the alarm system’s control panel (or whatever it was connected to). These ultrasonic sensors were frequently blamed for triggering false alarms. A phone ringing, an alarm clock sounding, or the heating system coming on could cause a false alarm. A better solution was needed. Read about some new WeMo smart home sensors here.

The best solution found and used today is based upon infrared technology (abbreviated “IR”). Other technologies based on microwave and radar were tried, but they never gained the popularity of infrared technology. Infrared sensors began to appear on the market in the 1980s. When they first came out, they were somewhat expensive, but as production ramped up and more manufacturers found ways to use them for different applications, the price dropped quickly. The most popular consumer uses of IR sensors are for motion-sensing floodlights.

IR montion sensors look for the presence of human heat moving across their field of view. The sensors are passive, which means that they are looking for the movement. Unlike radar and ultrasonic systems that emit a signal and look for a reflection, IR sensors just receive.

All IR sensors have some common ratings and specifications. The first is the detection pattern or the field of view. This defines how wide or narrow the IR sensor can detect. Typically, they look like the image on the right.

If motion sensors are so much better now than the early ultrasonic models, why can’t they be used outdoors with an alarm system? Strangely, it still comes down to the issue of reliability. With motion-detecting floodlights, if the sensor false alarms, the only consequences are the lights’ coming on for a few minutes. If an IR sensor connected to an alarm system falses, the sirens are set off and in some cases, the police may be dispatched to investigate. The noise of the sounding alarm sirens will surely irritate your neighbors. You don’t want a mob storming your porch because the alarm system is going off constantly!

When IR motion sensors are used outdoors, they are more likely to cause false alarms. The most common cause of a false trip is rapidly changing weather conditions. For example, when a warm winds blows across motion sensing floodlights, it’s not uncommon for them to trip on. If the light is integrated with other systems, not only do the floodlights come on, but so do the connected devices inside the house that are set to the same addresses controlled by those floodlights. As long as there is no siren, there’s no big problem.

There are some alternatives to IR sensors that can be used outdoors that will decrease the likelihood of false alarms. The IR beam system sends an invisible beam between two points. If the beam is broken, it trips the alarm system.

RELATED: What’s Your Home Security Plan While On Vacation?

Some alarm systems have a feature called “Cross-Zoning”, which will reduce false alarms. Cross-zoning requires that two zones be activated at nearly the same time in order to trigger the alarm system. Basically you place two sensors looking at the same area that needs to be protected. When someone enters that zone, the two sensors will have to detect the intrusion within a few seconds for the security system to consider it a valid detection.

Finally, if you do choose to use a motion detector outdoors, be sure to choose one that is rated for outdoor usage. Regular indoor models don’t have the protection to keep the effects of moisture from damaging the electronics on the circuit board. If an indoor-rated model is placed outside, even if it is protected from the rain, it will soon malfunction as humidity and insects get inside.

Also read about the importance of contact sensors for home security and automation.