Home Lighting 101: How to Add Lighting Control to Your Home - Electronic House ​​ 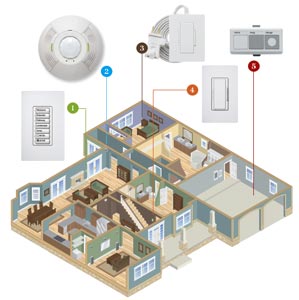 Want to freshen up the appearance of your house, enjoy greater convenience and save some energy to boot? Then you should look into a lighting control system.

A lighting control system can automatically dim your lights, enact preset “scenes” so only the fixtures you need come on, automatically turn on and off lights so you don’t have to run around the house to do so- and interact with other home systems such as motorized window shades, security systems, thermostats and whole-house control and automation systems.

There are many types of systems available, in a variety of configurations and price points. You can have a fully wired system if you’re building a home or addition. If not, no worries: Opt for a wireless system that transmits commands over radio frequency signals instead of wires. A combination of the two works for many homeowners.

Many lighting control systems today incorporate motion and occupancy sensors to turn on and off lights automatically. And some lighting systems are starting to work hand-in-hand with shading and thermostats. Lutron, for example, offers this seamless integration in its wired HomeWorks QS and wireless RadioRA 2 systems. If a sensor detects too much sunlight coming into a room, or if the temperature exceeds a certain point, the shades can automatically descend. Conversely, the shades can open to harvest daylight and warmth from the winter sun, while triggering lights to turn off.

The diagram above: illustrates possible locations for the various components that make up a lighting control system.

Photocell Sensor
Place these near motorized window treatments to read how much natural light is entering a space and to trigger the opening or closing of shades or drapes to harvest daylight.

Wireless Repeaters
These are often needed to ensure that commands sent by a wireless lighting control system are transmitted reliably. They are placed in various locations.

Types of Lighting
LEDs. Light emitting diodes are the new big thing, but LED lamps can be expensive, so it’s hard to replace all your lights with them at once. Buy a few at a time, and make sure they have enough brightness (expressed in lumens). A 60-watt incandescent bulb, for example, throws about 850 lumens.

CFL
Compact fluorescent lamps have improved greatly, but many of them can’t be dimmed. Use them in areas where lights will be left on for a while, as they often need time to warm up. Seek color temps in the 2700 to 3000K (Kelvin) range for a “soft light” resembling that of an incandescent bulb.

Halogen
Halogen bulbs can be slightly more efficient than incandescent bulbs (efficiency varies), and they emit a light that is as visually pleasing to the eye.

Also Check Out:
Inside an AT&T Digital Life Home
Who Left the Lights On?
Theo Kalomirakis Talks Home Theater Mistakes, Lighting and Automation