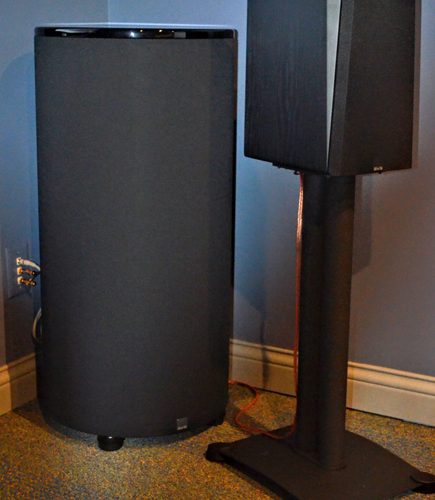 This year, we’re starting to see more people adding Dolby Atmos into the home. This audio format can deliver the most immersive home theater sound to date, but you will need specific equipment. Planning out a room with that sort of system takes time, effort, and money.

When it came time to transform his unfinished basement into a room with Dolby Atmos and a big screen, Scott spent a good portion of his time planning.

“Planning and budgeting were the most time consuming and challenging parts,” he says of the project. “I started out with some specific goals in mind for the theater, and I also listened to podcasts for ideas, specifically AV Rant. Rob and Tom [the hosts] were very helpful during my planning phase.”

The first thing to plan out was the room’s soundproofing. Because the rest of the house has an open concept, Scott wanted to make sure that the sound coming from this 11-by-25-by-8-foot space didn’t leak into other areas. “We wanted the new room to be somewhere to watch movies and have friends over without disturbing the rest of the house,” Scott says. “Because of this, soundproofing was a top priority.”

To achieve the insulation he wanted, Scott consulted the Soundproofing Company. They recommended Green Glue between two layers of 5/8 drywall, a clips-and-channel system for the ceiling, backer boxes around each can light, a dead vent with a separate blower so the HVAC is not connected to the house duct work, and an entry hallway to the room to better isolate it from the house.

Even though Scott says he spent about three-quarters of his total budget on room construction and soundproofing, he considers it to be money well spent. “The net result: We can push performance of the system to near-reference levels and the main floor does not hear a thing,” he says.

Of course, there were other essentials, including cabinetry and a refrigerator for the family’s party needs. Scott put together a massive spreadsheet to keep track of both materials and labor. This included tasks he wanted to do on his own (carpet, paint, wiring) and what he would farm out to his contractor brother-in-law. It also helped him budget out the final cost, as well as figure out what needed to be trimmed back.

Next, he had to choose the equipment. With a little patience and a lot of web surfing, Scott managed to snag all of his purchases as factory refurbished, an open box return, or through outlet stores. He did splurge on the screen, but guesses that his research saved him about 25 percent on equipment costs.

It’s not the cheap stuff, either. The room has an Epson projector, a 100-inch Elite screen, and a Yamaha Aventage receiver. There’s also a 9.2 speaker system, which includes two Yamaha in-ceiling speakers to handle the height effects of Dolby Atmos. The rest of the speaker setup is made by SVS, which Scott found through the AV Rant podcast.

“I see speakers as a long term investment,” Scott says. “The technology of speakers does not change as rapidly as video or electronics. I know a good investment in speakers will last a long time.”

In addition to being a good investment, the SVS speakers pack the punch Scott was looking for—and having two subwoofers certainly helps to make that happen.

“Most of the people who I have demoed the room for have never heard a real subwoofer,” he says. “The visceral impact of the dual subs placed in diagonally opposing corners provides even bass response across the room. The subs provide that sense of impact even when we are playing the system well below reference volume. I think that is the most impressive part of the system.”

Scott says that when it comes time to replace his 1080p projector, he’s hoping to go 4K, if the price is right. “But I should not need to upgrade my speakers or receiver for a very long time, if ever,” he says.

And that’s fine, since there are other tweaks in the works. The room currently has three zones of lighting, but Scott plans to upgrade the switches to the Lutron Caséta system sometime in the next year. He’s also working on a two-channel listening system in the home office—using SVS speakers, of course!

For now, between Scott’s two Pixar-loving kids and a wife who enjoys hosting award-show parties, there’s no doubt the now-finished basement will get plenty of action for years to come. Scott is also pleased with the system, but not just because of the stellar performance.

“For me, it’s a mix of my love of movies combined with the satisfaction of DIY projects,” he says about the room. “The fact that this project is enjoyed by my immediate and extended family is really gratifying.”

Looking to create an impressive home theater system? Receive tips and advice on how to turn any room into a sensational home theater in our new eBook, The Complete Guide to Home Theaters.