4 of the Best Home Theaters by DIYers - Electronic House ​​ 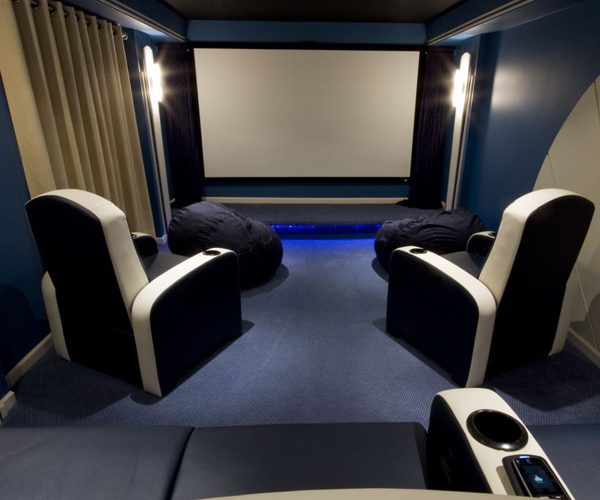 There really is no one more passionate than the do-it-yourselfer. Whether a person decides to build a deck, a kitchen, a subwoofer or a Soap Box Derby racer, they always seem to have that special twinkle in their eye. Maybe it’s a sense of accomplishment, pain from the soldering scars, or just an adrenaline rush. It’s always there, though.

However, some definitely have more twinkle than others. That’s because when it comes to creating the best home theaters, these people aren’t just hobbyists—they’re artists.

Over the years, we’ve seen a lot of home theaters that would qualify as the “best home theaters.” Some of these homeowners have a unique story, some were incredibly creative, some incorporated a theme, some worked with a limited budget, and some just have a really cool room.

It was tough, but here we managed to narrow down four of the best home theaters from DIYers that we’ve ever seen. Think your room should have made the cut? Drop us a line in the comments section below.

The Bat Cave
C.J. O’Neill didn’t need a big budget to create a blockbuster home theater. Instead, he just needed a little inspiration. He wanted: sort of a “bat cave” atmosphere, where no light or sound would enter. Out of that idea, “The Dark Knight Theater” was born.

Instead of filling the room with: posters and collectibles, C.J. used his superpowers to build a room around his theme. “As construction progressed, I started to tailor some aspects of the theater to match the name. I wanted the atmosphere to be somewhat like that of the movie—a combination of dark, somewhat Gothic, architecture with high-tech features,” he says. “I tried to accomplish this with the combination of mostly dark colors and oil-rubbed bronze with modern gear.”

Using AutoCAD, the design was just one of the steps in his year-and-a-half planning process, which also included research on noise isolation, control systems, lighting, acoustics, decor, and even how to connect the basement system to the rest of the house. The current room includes Crestron control, a Panasonic projector, a 120-inch SmX screen, Triad in-wall speakers, and eight Berkline recliners.

Memory Lane
Tom Kern’s blast from the past is a gorgeous homage to movie theaters from the 1950s. “I have always loved going to the movies and most of my childhood Saturday mornings were spent at the Palace Theater, two blocks from my home,” he says. “I could watch two science fiction, horror or western feature films, one or more cartoons, a cliffhanger serial chapter, a newsreel, a short subject, and previews of coming attractions… all for a quarter!”

Located on the second floor of his home, this room features: a permanent stage and screen area with really ornate red and gold, as well as fringe-lined swags. There are Greek columns, chandeliers, wall sconces, ferns and palms, plush carpet, brass stanchions with red velvet ropes, and real seats from an old movie theater. It took three years to collect all of the: pieces, which also includes: 1950s movie posters, a 1940s ticket collection box, vintage lighted “EXIT,” “Silence Please” and “Ladies Room” signs, and several Coca-Cola concession stand displays.

Of course, the main attraction here is the actual movie experience, which is made with a Sanyo projector, a 92-inch Da-Lite Cinema Vision Da-Snap screen, Bowers & Wilkins speakers, and much more. Other features include a 1947 Stoner Candy Machine, a 1950s popcorn machine, and a two-curtain feature. The latter is Tom’s favorite, with a main curtain that opens out before the title curtain goes up.

Art Deco
Chad Halvorson’s room may only measure a mere 12 feet wide, but what he did with that space is truly amazing. “We ended up taking advantage of the 42-foot length to space out seating,” says Chad. “We built a riser for a row of three and then placed two single seats in front of the riser. Finally, in the very front, we placed two Love Sacs for up-close viewing and gaming.”

Besides getting seating for seven into this slim space, Chad has packed the room with all sorts of impressive equipment, including a Panasonic 1080p projector, a: 120-inch Elite Acoustically Transparent screen, Onkyo 7.1 sound, an HTPC, an Ubuntu media server, and Leviton lighting.

However, it’s: the room’s design that’s most impressive here. Dubbed the “Granada Cinema” (after his: street), Chad tried to combine art deco with high-tech engineering, along with two-tone seating, a custom-built concession stand, and a candy display case. There’s also a false wall to hide the speakers and subwoofer, as well as lighting that runs along the concession stand, riser and stage, all to: give the experience a real cinematic touch.

From Tragedy to Triumph
Vincent Bova is one of the nicest DIYers you’ll ever meet. He has an incredible knack for turning something negative into something positive—as evidenced by this theater room.

You see, back in 2005, Vincent’s vision started to blur. Eventually, he was diagnosed with a brain tumor, which had mounted itself on his optical nerves and pituitary gland. While waiting for the necessary surgery, Vincent needed a positive way to pass the time. “It was at this time when I started reading and surfing the web about home theater, home automation, and anything related to the field,” he says. “I was fascinated, and the feeling of having nothing to lose was overwhelming.”

Although the surgery was successful, Vincent’s pituitary gland was gone, along with more of his ability to see. Medications affected his weight, his sleep, and his work. He needed to challenge his mind, so he turned to A/V and remotes, specifically programming and creating graphics.: He also created this basement theater, which includes a JVC 1080p projector, a Marantz receiver, Lutron lighting, Paradigm speakers, and an RTI controller. His passion also sparked a new business,: Total Control Remotes, which helps installers and home theater enthusiasts around the country to program universal remotes and control systems.