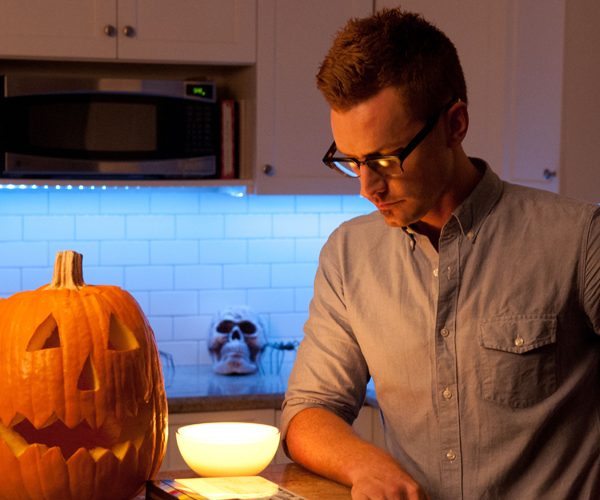 Cinematographer John W. Rutland is no stranger to creating chilling light effects. This Halloween, Philips Hue collaborated with him to bring high-tech horror into your home.

With his experience in lighting supernatural horror films like Paranormal Activity: The Ghost Dimension (which hits theaters on October 23, 2015), Rutland is an expert on transforming a cozy living room into a frightening haunted house using Philips Hue and the spookiest of nearly 450 third-party apps available.

Scene 1: Don’t Be Afraid of the Dark
In Paranormal Activity: The Ghost Dimension, as in other horror films, the absence of light is an easy way to hide creatures, villains and ultimately, build tension. The portability of Philips Hue Go allows you to put a single source of light anywhere, like inside a Jack-o’-Lantern, creating dark spaces and eerie shadows for our imagination to run wild.

Step 1: In the kitchen, place a pumpkin, carved to your liking, on the counter and place your Philips Hue Go inside. This can be a quick and easy way to summon the spirits of Halloween.

Step 2: To deepen the effect, put Philips Hue Lightstrip Plus under your cabinets and island/bar counter and replace all of your light fixtures with Philips Hue A19 and BR30 bulbs.

Step 3: With all of these lights in place, dim them down low and group them to the same setting, except for the Jack-o’-Lantern (giving it its own, brighter setting), and use a third-party app, such as Hue Halloween, to create a chilling Halloween effect by having your Philips Hue lights react to the spookiest of sounds.

Scene 2: Enter At Your Own Risk
We’ve all curled up watching a scary movie, begging the protagonist to not go down that hallway. The reason we know it’s unsafe is typically because the lighting makes us aware of potential danger. In Paranormal Activity: The Ghost Dimension, the team used light to direct the audience’s attention to the unknown, creating a sense of creepy unease.

Step 1: To make this “something ain’t right here” effect in your home, screw in Philips Hue BR30 bulbs to your existing overhead lighting in your hallway.

Step 2: Use the Philips Hue app to set your bulbs to a muted, fluorescent green to indicate discord and uncertainty and add a flicker effect using the strobe function on the third-party app, Hue Disco. The combination of these tones adds an unbalanced and off-kilter tension, making it look like there’s something moving down the hallway.

Step 3: For an added fright, position a “fallen” lamp on the floor in the opposite doorway, fixed with a Philips Hue A19 bulb, to cast a light uncharacteristically across the floor and wall. Make the hallway path more menacing by placing a Philips Hue Go in the linen closet or behind a barely-cracked bedroom door, creating an eerie glow from within.

Step 4: Sync some moody Halloween music with Hue Disco and set your lights to flicker and change color with the beat. Combine all of these effects with the haunting haze of a hidden smoke machine or dry ice and your guests will wish they hadn’t stopped by.

Scene 3: Spooktacular Welcome
Horror films usually have an iconic scene that defines them. Such is the case with the horror classic,: Carrie. In the climax, as Carrie loses control, the lighting of: the school gym turns completely red, reflecting the blood spilled and the rage burning inside her.

Step 1: To recreate the mood in that final scene inside your home and give your visitors and trick-or-treaters an eerie glimpse of what lurks in the shadows, put Philips Hue A19 bulbs in your outdoor light fixtures and in a few table lamps, placed strategically behind your front window and clamped, hidden, above the inside of your doorway.

Step 2: Using the Philips Hue app, create two scenes—one with a muted, “everything is normal” effect and the other with all of the Philips Hue bulbs turned a blood-red tone.

Step 3: When your neighbors ring the doorbell, answer with the seemingly normal “all is well” light effect and then, with Philips Hue Tap in hand, quickly switch scenes for a scare, flooding the entryway and living room with intense, red lights.

More About John W. Rutland
John W. Rutland is a visual storyteller, who is able to identify the essence of a scene and translate it through the lens. He has successfully navigated between the commercial, narrative and documentary worlds, always striving to find the most compelling images to tell a story.

His work as a cinematographer has screened at some of the top film festivals in the world, including the Berlin International Film Festival, Toronto Film Festival, Tribeca Film Festival and SXSW. Most recently, Rutland shot the supernatural horror film, Paranormal Activity: The Ghost Dimension, and feature films, Exists and Lovely Molly, with Eduardo Sanchez, co-director of The Blair Witch Project.

He earned a BFA in film production from the University of Central Florida and an MFA in cinematography from the American Film Institute in Los Angeles. While attending AFI, he received the prestigious Tom Yoda Scholarship and was cinematographer on the thesis film, Traces, which won the Best Cinematography Prize at the Beverly Hills Film Festival.

Throughout his career, Rutland has used light to hide and reveal some of the scariest monsters, spirits and killers on screen, consistently keeping viewers on the edge of their seats. He uses every shade, color and intensity of light to create chilling effects to heighten viewers’ fears, build suspense and intensify the terror lurking in the shadows.