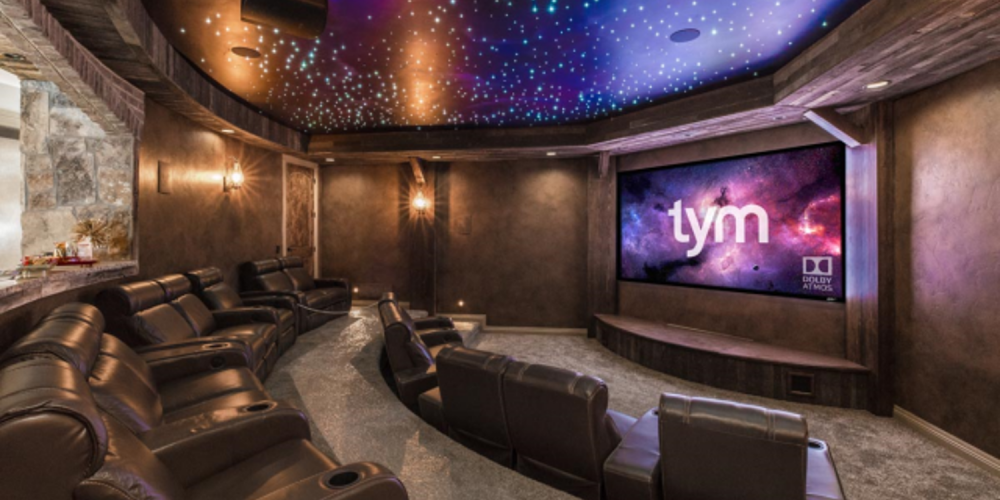 Each year the editorial staff at Electronic House reviews hundreds of submissions to its Home of the Year contest. The entries submitted by home systems installers represent some of the smartest, most innovative home tech projects on the planet. Here you’ll see our picks for the best home theaters, priced between $25,000 and $75,000. Granted, this is still a big chunk of change, but is definitely on the lower end of the money scale when having a home theater design and installed by a professional.

Coal Miner’s Masterpiece: Homeowner pays homage to his industrial roots by adding a “mine shaft” theater to his basement.

Home theaters offer a unique opportunity to create a space that reflects a passion, hobby, or, in this case, a family’s long history in the coal mining business. Explains home systems integrator Matt Montgomery from TYM Homes, of Sandy, Utah: “This homeowner’s father was once a coal miner, and so he grew up with an appreciation and fondness for mining. The father had incorporated materials and accouterments reminiscent of coal mining into his own home, so his son — the owner of this award-winning project — decided to honor his family’s lineage by making his home theater resemble a mine shaft.” Plus, the rough, natural materials incorporated into the amphitheater-shape space would just look darn cool and be totally unique from other home theaters. 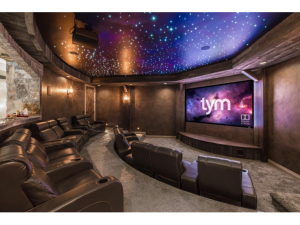 By working closely with the builder, Tree Haven Homes, of Bluffdale, Utah, the TYM team was able to blend cutting-edge home theater gear into an atmosphere reminiscent of an earlier time when pickaxes, not remote controls, were the tool of choice. A Sony 4K video projector nests between rustic wood beams on the ceiling; the grilles of Paradigm speakers and subwoofers peek through locally-sourced, reclaimed barn wood on the walls; and sconces that resemble gas lanterns shed the perfect amount of light over the viewing area. For this project, easy, intuitive control of the impressive assortment of A/V equipment is provided by a Savant system, which was programmed by Montgomery to prep the components and the room for a movie in seconds.

The preparations begin the instant the owners press Play on the Savant control app that’s presented on an iPad stationed at the owner’s favorite theater seat. It’s pure 4K eye-candy in this theater. Per the owner’s request, TYM chose a trio of 4K equipment to ensure pristine pictures from start to finish. A Sony 4K media player feeds content to the projector, which throws Ultra High Definition image onto an acoustically transparent, 135-inch, 16:9 aspect ratio Peregrine AcousticPro-4K screen from Elite Screens.

Other video options are available too, including two Sony Blu-ray disc players, two Apple TV units, and three DirecTV satellite boxes. The media player and the rest of the equipment are connected to an Atlona 4K video switcher so that the transition from watching video on Apple TV to something on the Sony media player happens seamlessly and effortlessly. The owners just tap a button on the Savant iPad app, and the Atlona component makes the switch — even directing content to eight other TVs in the 9,000-square-foot house, giving the family a slew of places to take in a great movie. 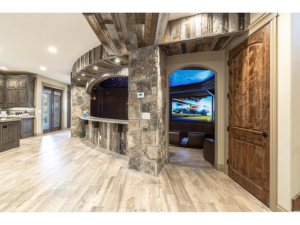 This same app provides control over other aspects of their home — all from the comfort of the mine shaft, or anywhere else they might roam. Dozens of dimmer switches, tied to a Lutron RadioRA 2 lighting control system, can be monitored and managed; several Visualint surveillance cameras can be accessed and viewed; a variety of fountains on the patio and in the yard can be controlled; and should someone ring the doorbell, the chime pipes through the home theater speakers, and the owners can converse with and see the visitor on the projection screen and converse with him or her via an iPad or smartphone.

“They can relax, cue a movie, and always stay on top of what’s happening in other areas of their house,” Montgomery says. “The Visualint cameras have intelligence software built in so they can be programmed to recognize a child at the swimming pool or a specific car in the driveway and trigger the Savant system to notify the homeowners with a message on their smartphone and tablets. It’s the ultimate way to escape yet still stay connected.”

The audio is equally engaging as the video — and as technologically advanced as the Savant mode of control — thanks to a Dolby Atmos surround-sound system comprising an Onkyo receiver and a 7.2.4 speaker configuration (seven in-wall and four in-ceiling speakers from Paradigm, plus two Paradigm subwoofers mounted behind the acoustically transparent screen). TYM built custom backboxes to optimize the reference-level audio quality of the speakers and turned to the company’s resident THX calibration expert, Greg Montgomery, to tune the audio system to project sound perfectly toward the owner’s favorite seat, although the audio is never lacking elsewhere in the room. 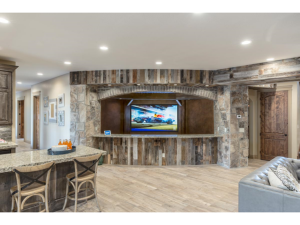 With video and audio integrated beautifully into the space, the project could have been complete, but TYM had one more trick up its sleeve … not without some persuasion by the owner’s wife. “She had seen a star ceiling in another theater, and asked as the room was being buttoned up if we could create one for her,” Montgomery says. With the help of the builder, more than 2,600 linear feet (5 miles) of fiber-optic strands were hand-placed into the ceiling’s sheetrock to create 1,000 twinkling stars. TYM’s creative director then painted a mural of the cosmos to evoke the appearance of the night sky. As are the other lights in the theater, the fiber-optic stars are connected to the RadioRA 2 system, which can be operated through the Savant app.

The star-studded ceiling was the icing on the cake in this home theater, where technology and design unite to create a one-of-a-kind entertainment experience. State-of-the-art equipment, from 4K servers and projectors to Dolby Atmos receivers and speakers, mingle easily with barn wood and gas lanterns, while a simple, iPad-enabled control system helps set the tone for a magical movie night under the stars.

Custom catering to content of all kinds under a night sky.

4K video is where it’s at in home theater, but it’s definitely not the end-all-be-all in home entertainment, especially when you still love your collection of standard DVDs and even videotapes, as was the case with the owners of this crafted-from-scratch home theater. The team from Electronics Design Group (EDG), of Piscataway, N.J., catered to the owners’ diverse entertainment tastes by installing an 11-foot-wide, 2.35:1 aspect ratio Stewart Filmscreen CineCurve screen with a full masking solution to alter its shape for 1.82:1, 16:9 and even 4:3 formatted video. 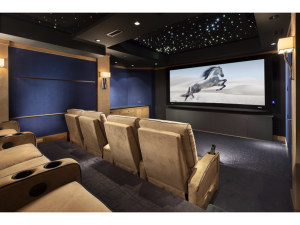 A Sony 4K Ultra HD projector delivers the video of choice and pairs up nicely with a 9.2-channel arrangement of Totem Acoustic Tribe speakers and subwoofers; a Control4 remote or mobile app on an iPad allows the homeowners to easily operate the masking system.

Also important to the theater owners was that the room itself be visually engaging. EDG installed a fiber-optic star ceiling that twinkles on command from the Control4 remote. The stars make up one of several lighting zones in the theater that allow the owner to alter the ambiance on a whim. “This affords them a lot of flexibility,” says Bob Gullo, chief creative officer at EDG. “They can choose to turn on only the fiber-optic stars, add in the sconce, turn on only the step lights, or several other combinations.” The Control 4 app can also be used to adjust the room temperature and view real-time images captured by any of several surveillance cameras positioned throughout the property.

Even when there’s seemingly no room for a home theater, there usually is. The attic of this high-end villa in Shanghai, China, got the nod from the homeowners to become their dedicated cinema escape, and the local integrator team from Sentiment HiFi transformed the area into a full-fledged home theater, complete with a JVC 4K video projector and a Dolby Atmos immersive surround-sound setup. 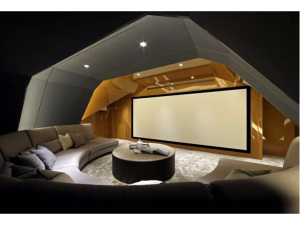 The integrators dealt with the odd-shaped space by installing acoustically transparent panels on the walls. These panels served to not only reshape the room but offered a hiding spot for the front RBH Sound SI-6100 speakers and subwoofers. Acoustical panels on the ceiling were used to conceal AIM285 speakers from SpeakerCraft that rounded out the Atmos arrangement and provide the overhead effects. A Marantz 8802 processor delivers the audio greatness.

In order to fill the entire front wall with video, Sentiment HiFi fitted the JVC projector with a 1.33X lens from Schneider Optics and gave the owners the power to control it all conveniently through a Vantage system. This, plus the Atmos audio system delivers an entertainment experience that’s as impactful as the viewing environment is unique.