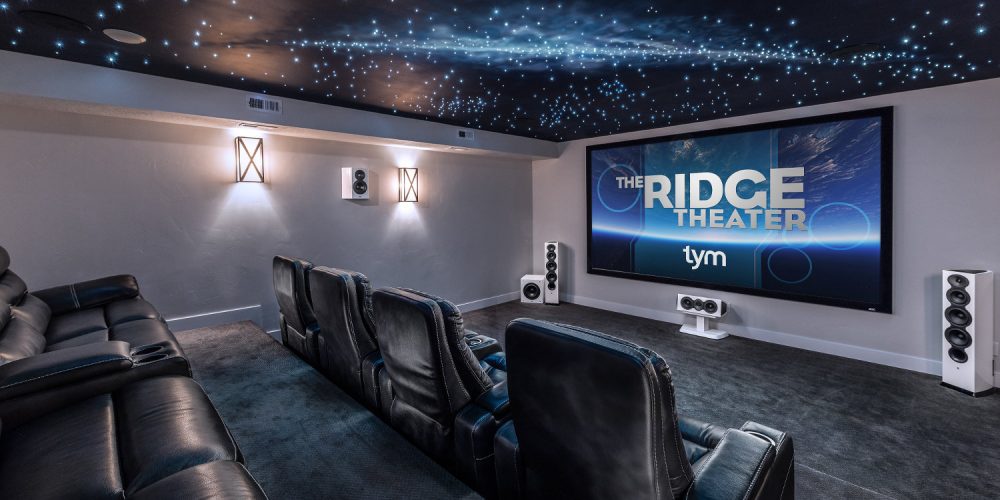 Some people build a home theater to satisfy their passion for movies. Others choose to remake a space for viewing sports, but for this owner the impetus for creating a special A/V destination was gaming.

The area for the gaming action had been carved out below the garage while the home was being built, but was left vacant while the homeowners discussed their vision for the space and put in ample hours of research. When they decided to go for it, they contacted Tym Smart Homes & Home Theaters to make their media space dreams a reality. The plan definitely worked: The home theater is the recipient of the Electronic House Home of the Year Gold Award for Best Home Theater Less than $25,000. 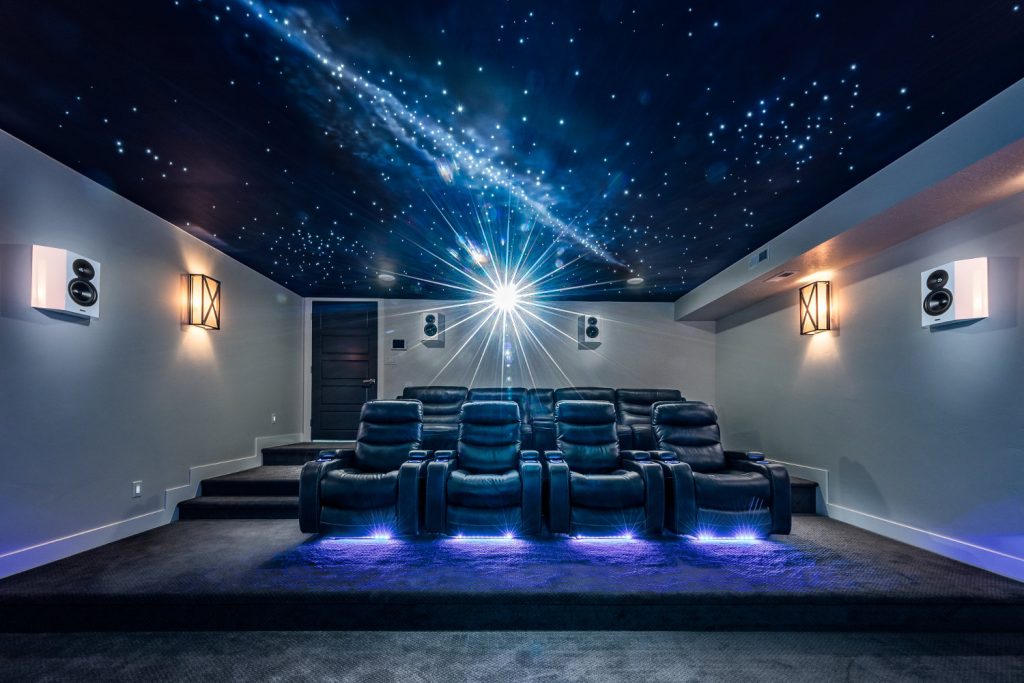 Playing with a Blank Canvas

Tym was the perfect choice for the project and for these owners. The team members were able to provide him with plenty of A/V options while giving her a fiber-optic star ceiling, which over the years has become the company’s signature feature. “She wasn’t sure she really wanted a theater, but agreed with one condition: the custom star ceiling,” says Matt Montgomery, co-founder of Tym.

As it turns out, though, the star ceiling became the toughest part of the project to pull together. But more on this later. 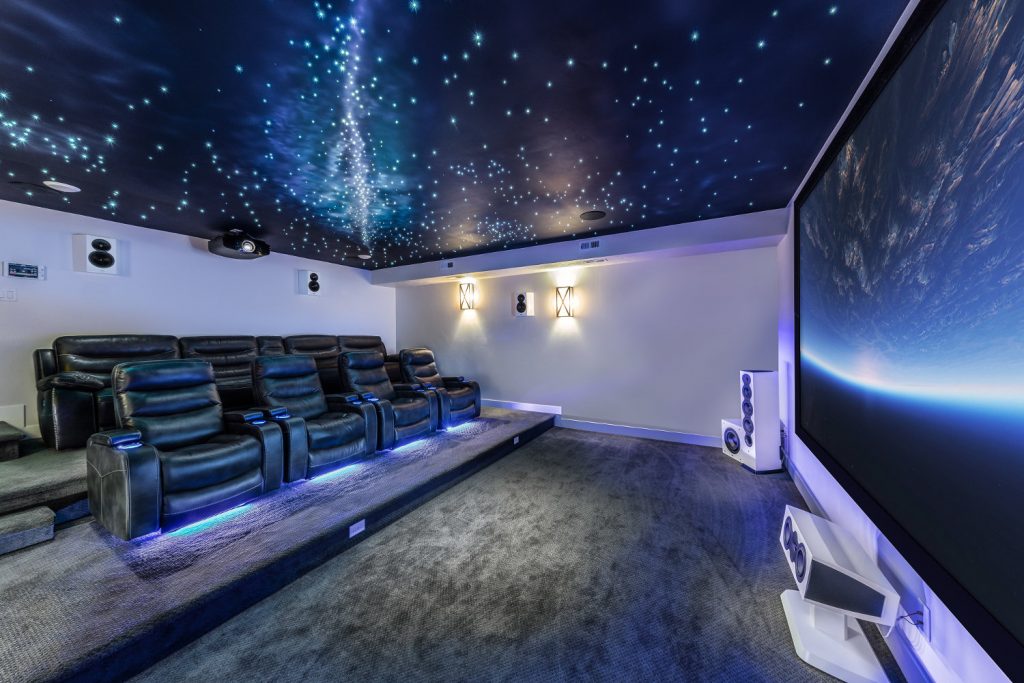 The owner’s PC was the main gaming component, so Tym made sure connect it to the Sony 4K projector in the theater through a dongle. The PC is stowed neatly with the rest of the equipment in a custom-built equipment rack. For flexibility, Tym enabled the PC, projector and mouse and keyboard to communicate both wirelessly and via cabling. “The shell of this room is concrete, so wireless can be finicky,” notes Montgomery. “Having a wired connection provided the homeowner with a reliable backup.”

A tap of a button on a Control4 remote kickstarts the projector and PC, and the owner is instantly immersed in the action. A 135-inch screen from Elite Prime Vision presents the video; an Anthem receiver, 11 Revel speakers and two Revel subwoofers immerse the room in Dolby Atmos audio. Aside from the Sony projector, the Revel speakers topped his must-have list. After auditioning several speaker combinations at the TYM showroom, he fell in love with the audio performance and the modern cosmetics of the white floorstanding speakers. “It’s probably the most any client of ours has ever researched the demoed equipment,” Montgomery remarks.

It was time well spent, as the theater performs beautifully both for gaming and the occasional movie that gets popped into the Sony 4K Blu-ray disc player. 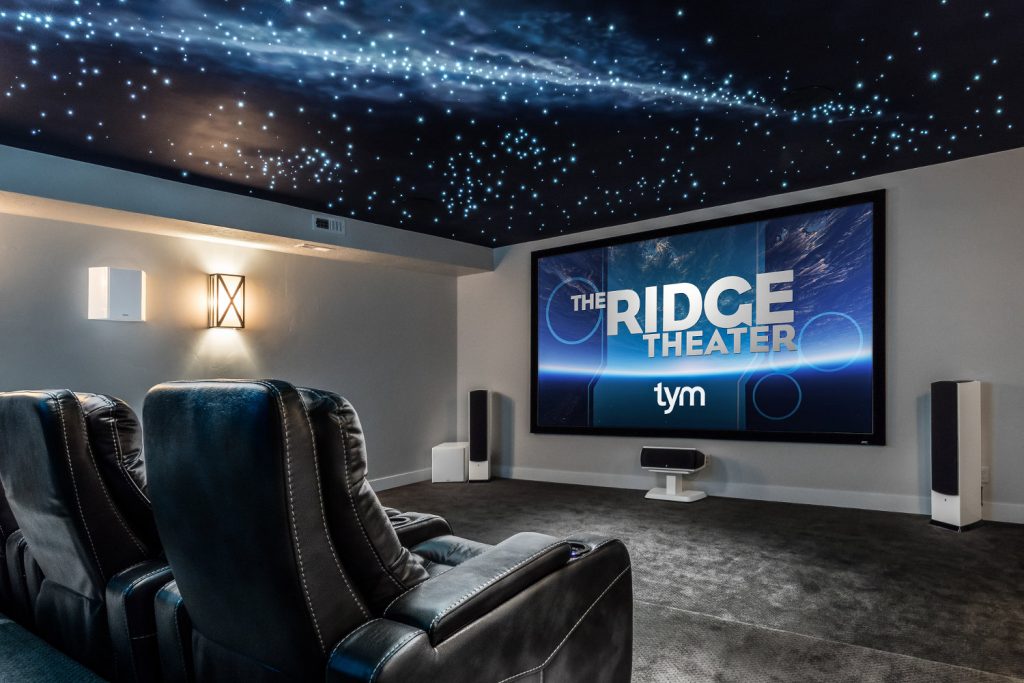 A much bumpier path toward perfection was taken during the creation of the fiber-optic star ceiling. Per the owners’ request, Tym creative director Brad Montgomery installed 26,000 feet of fiber filament comprising 1,200 individual stars to replicate the Milky Way galaxy. “It was one of the more complicated and labor intensive star ceilings we had done and has double the amount of stars of other star ceilings we have done,” Matt Montgomery says.

In less than a day, however, Tym’s painstaking work was ruined. The builder’s sheetrock company mudded over all of the fiber optics. “We did our best to salvage the ceiling, but it was no longer ‘art.’ We ended up having to tear down the entire ceiling, install a new one and add the fiber optics once again,” Montgomery relates. “And this time we brought in our own sheetrock team.”

Tym finished off the space by tying the fiber-optic Milky Way to the Control4 system. Just as he gets instant access to video games and movies through a touch of a button on a Control4 remote, she can bring the galaxy to life.