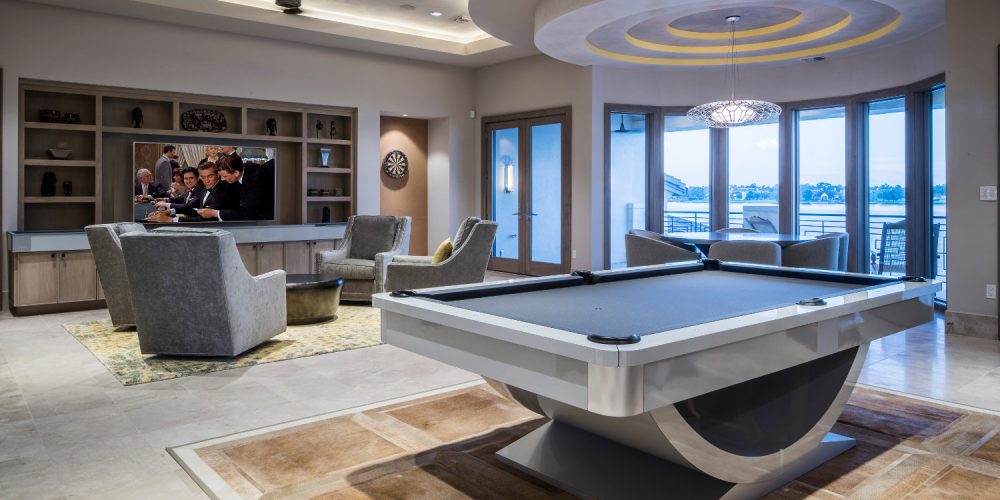 Dubbed the “Modern Lakeside Retreat,” this 12,000-square-foot home lives up to its name, thanks in part to a Crestron automation system and Lutron lighting system expertly designed and installed by Service Tech Audio Visual, of Cedar Park, Texas. The technologies that work tirelessly and transparently in the background are more than just “modern,” though — they’re state-of-the-art smart. This intelligence is combined with a design and orientation that soaks in the views of a nearby “lake.” And lastly, the ease by which the house can be managed makes going there feel more like a vacation retreat than a permanent residence.

These three facets fuse seamlessly together to create a one-of-a-kind home environment that’s fun, effortless, and exactly what the homeowners had envisioned when they hired Service Tech to integrate a bevy of brainy systems into it during construction. It’s a formula that also made this project a worthy recipient of the Electronic House Home of the Year, $150,000 and up (modern/contemporary) Gold award. See here and here for other Home of the Year winners. 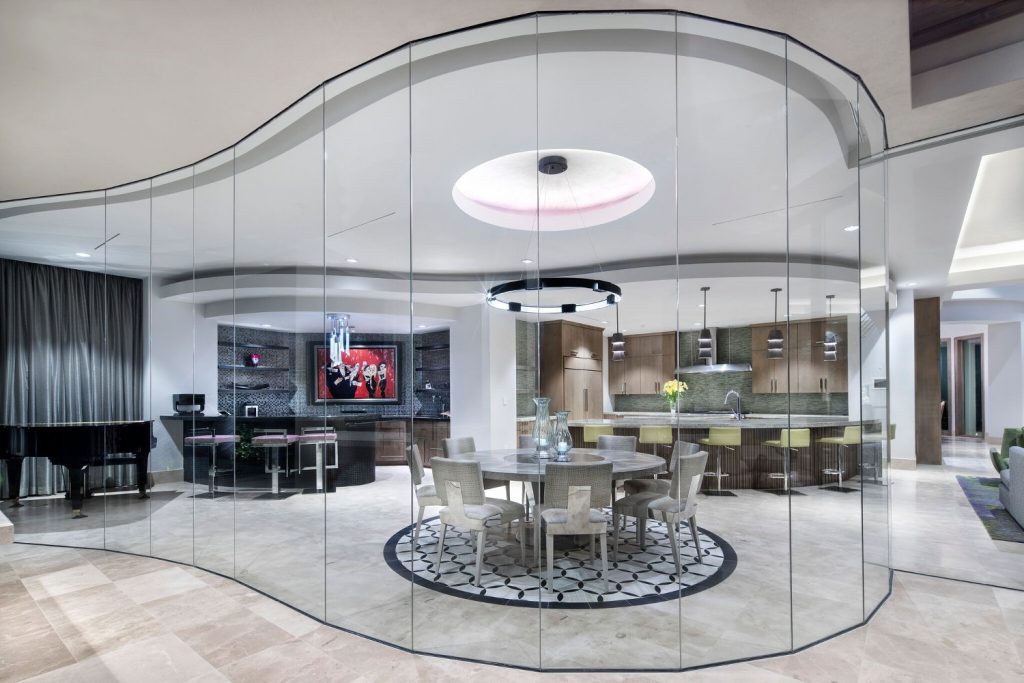 One of the first suggested solutions Service Tech brought to the table was a whole-house audio and video system. Given that the owners had requested from the get-go a dedicated space for a cinema, it wasn’t too far of a stretch for Service Tech to assume that the owners would also appreciate having music and video accessible in other rooms of the house, as well as outside. Their assumption was spot on. Built into the ceilings of the house would be enough Sonance architectural speakers to deliver music to 17 independent listening zones. A Crestron audio matrix ties the speakers to an Autonomic Controls Mirage music server, as well as to a generation-3 Apple TV, which lets the family and guests stream music to any and all zones via AirPlay.

In charge of passing video from a cable TV set-top box, Apple TV, and Blu-ray disc player, and surveillance cameras to eight TVs is a Crestron video matrix. The owners choose what they want to watch and where they want to watch it from a nearby iPad, which is usually stationed in a wall dock for convenience and charging. Music selection and direction is handled though the same Crestron app that controls the distribution of video. Alternatively, the owners can grab one of several Crestron HR-150 handheld remotes to control the A/V action in its dedicated room.

Back-to-Back TVs for Double the Entertainment

The diversity of entertainment is impressive, certainly, but so is the way in which at least two of the eight TVs were installed. In the main living area two 65-inch Samsung TVs pressed back to back lift together out of custom-built cabinet when commanded from the Crestron home control app. The screen of one TV faces the fireplace and sitting area while the other screen looks out to the kitchen. 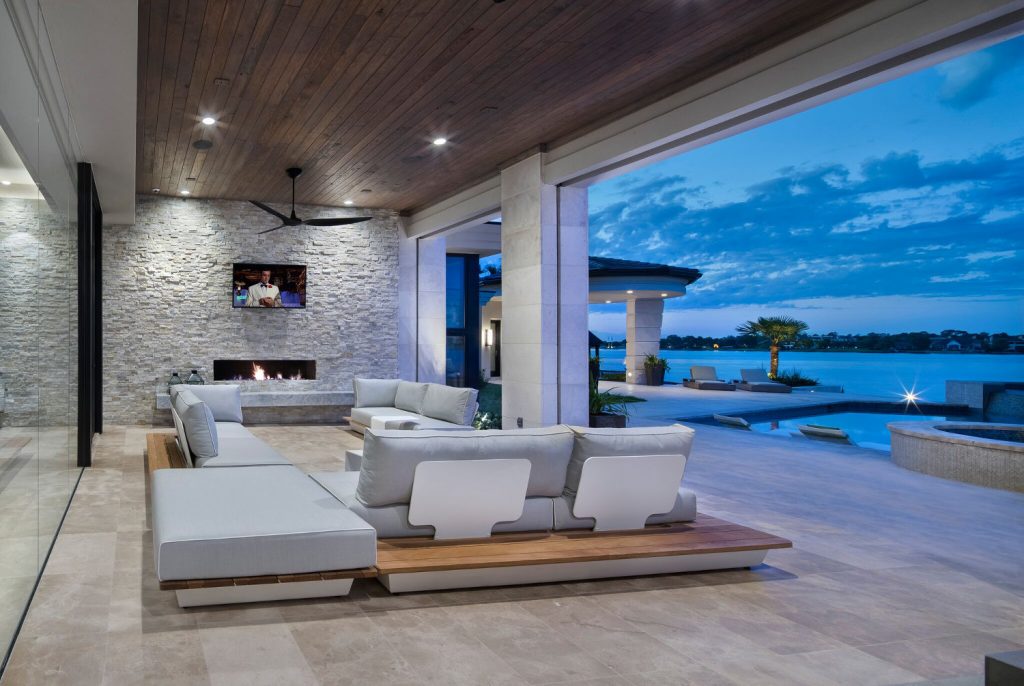 Even the outside of the house was primed for entertainment by Service Tech. Rock speakers dot the landscape so that music can be clearly heard by the swimming pool. Tunes from in-ceiling speakers blanket the outdoor kitchen, patio, and cabana. A Vizio TV stationed inside a covered patio safely away from the wind, rain, and sunlight pulls video from the video sources inside the house where the rest of the entertainment and automation components also reside. Again, the Crestron app puts the owners in charge of what’s playing on the outdoor speakers and TVs. They can even stream music to indoor and outdoor speakers installed in a crow’s nest that overlooks the lake.

Whole-house audio and video are a natural high-tech choice for a home that’s designed for entertaining. Less obvious but equally as important, however, are smart thermostats, lighting, and shading. They can set the mood, the tone, and the comfort level for the occasion, so after getting the go-ahead from the homeowners, Service Tech added to the Crestron control platform eight Crestron thermostats, a Lutron HomeWorks QS lighting system, Lutron automated drapes and shades, Somfy motorized bug screen on the patio, and Jandy swimming pool system. 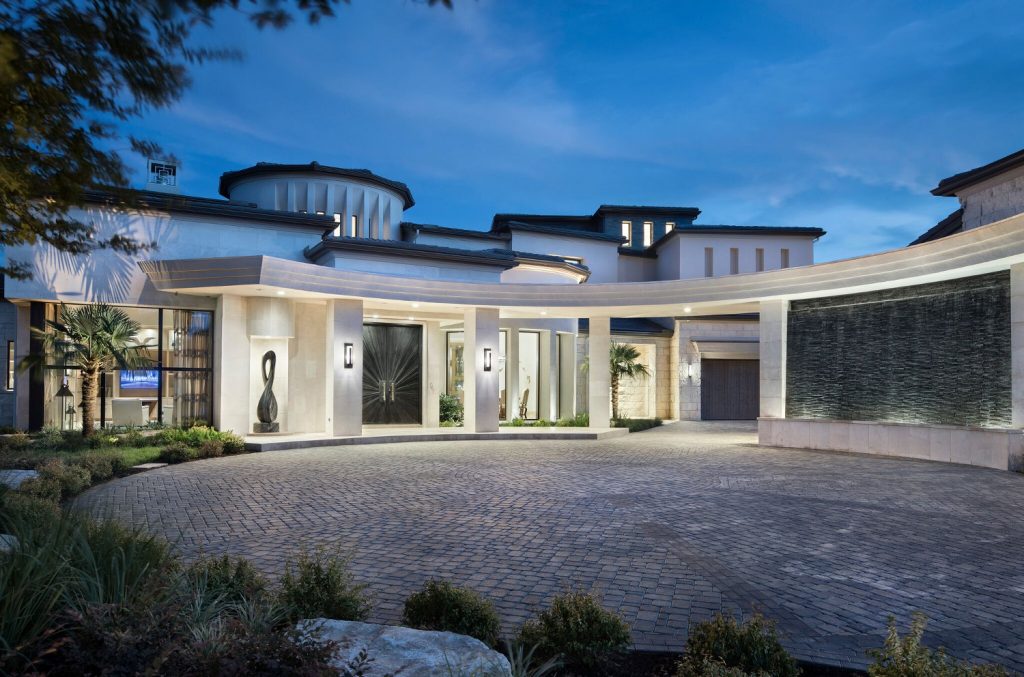 With these systems seamlessly integrated, the homeowner can use the same Crestron app that operates the whole-house entertainment system to brighten a certain group of lights, adjust a particular thermostat, open and close select shades, activate the swimming pool heater, and lower and lift the patio screens that offer protection against insects, for example. A misting system can also be activated to cool off the outdoor air when necessary. In what could have taken several minutes of setup time, they can complete in seconds right from an iPad.

The preferred settings of each of these components was programmed into the Crestron system by Service Tech, which means the homeowners can just press a button and know that the entertainment atmosphere will be set precisely to their liking. However, preferences are bound to change, so Service Tech supplied the owner with the Lutron app, which allows him to easily modify the settings of lighting scenes as well as choose to which rooms to assign those newly created scenes.

Home Theater Caps off the Project 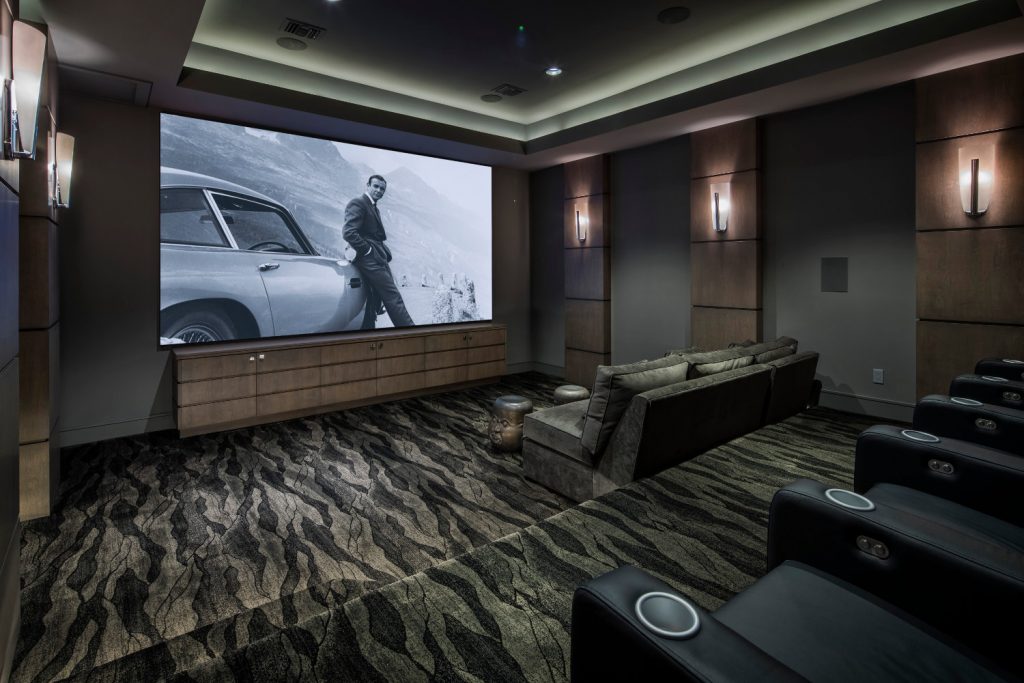 So what ever happened to the plan for the home theater — the impetus of this extreme integration of smart home technology? As the architects at Jauregui Architecture, Interiors & Construction were working on the layout and design of the cinema, Service Tech was busily specifying home theater components. As the home’s premiere entertainment destination, the home theater would comprise some of the finest A/V equipment available. This would include Dolby Atmos surround sound with Sonance cinema-grade speakers, Sony 4K projector, and 173-inch Screen Innovations screen. Naturally, as is the case with the rest of this sprawling lake house, the Crestron system boils down the control of this high-end gear to a simple tap of a button. Technology, combined with design and simple control, creates the epitome of easy living for the owners of the Modern Lakeside Retreat.