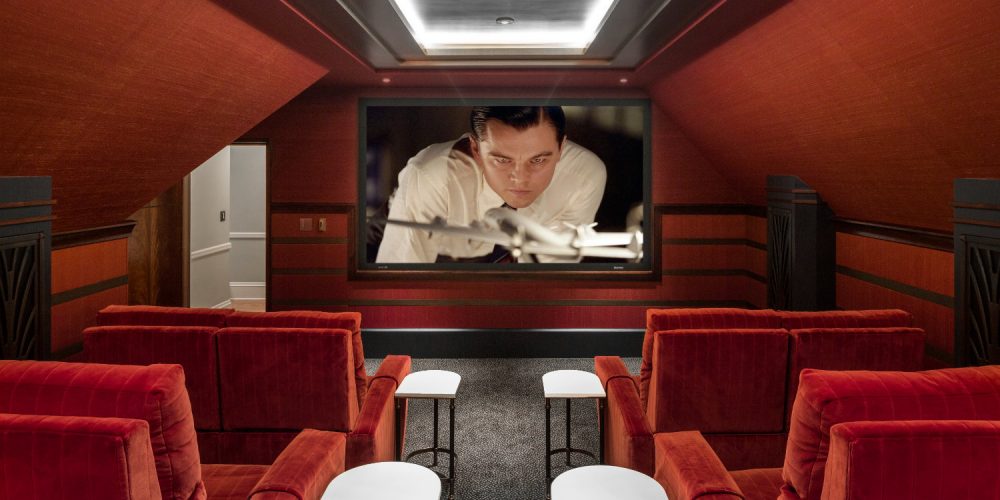 Each year the editorial staff at Electronic House reviews hundreds of submissions to its Home of the Year contest. The entries submitted by home systems integrators represent some of the smartest, most innovative home tech projects on the planet. Here, you’ll see our Gold and Silver picks for the Best Home Theaters, between $75,000 and $150,000 in high-tech equipment. 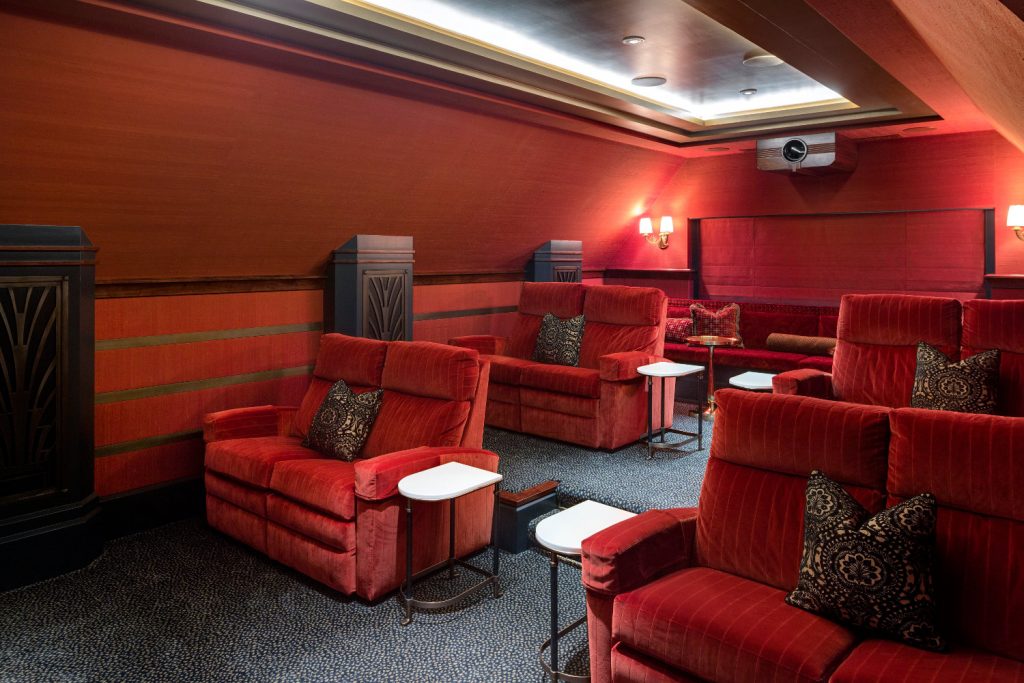 Blessed with 14,000 square feet of living space, the owners of this St. Paul, Minn., mansion had plenty of room for entertaining family and friends — spacious family room and kitchen, luxuriously appointed patio, a grand foyer. The only thing missing, it seemed, was a sensational home theater. Remarkably, one of the biggest challenges was finding a good spot. The crawlspace-like basement of this 1906 home was a no-go, as were the family room, den, and other spaces that the owners preferred to keep as is. The best option, says Lance Anderson, founder and CEO of the home systems integration firm Admit One, of Edina, Minn., was a dusty storage space on the third floor.

Admittedly, scaling the stairs to reach the home theater would require more muscle than skipping over to a media setup on a lower level, but the homeowners liked the idea of making their home theater feel like a special destination. They also were keen on the concept of maintaining the same vintage look that pervades the rest of the residence. Naturally, then, says Anderson, concealing most of the A/V gear was of the upmost importance. “They wanted the period design to be the focal point, not the projector or the speakers.”

In a room of typical construction, Admit One could have easily tucked a rack of equipment in a wall and stowed a projector above the ceiling. Speakers could have been recessed into the ceiling and walls and to top it off, a sleek, modern keypad or touchpanel could have been mounted to the wall for a quick, convenient kick-start of the equipment as the owners strolled into the room. This 24-by-12-foot room, however, featured slanted walls, dormer windows, and a vaulted ceiling — unaccommodating of these common cloak-and-dagger techniques.

In the business of home theater design for more than 14 years, Admit One has experienced its fair share of challenging installations, so the embraced this project with gusto, engineering creative solutions that would preserve the home’s historic integrity without any compromise to the performance of the cutting-edge gear selected for the award-winning home theater, nor to the comfort of theatergoers. Before any A/V gear could be installed, Admit One had to tackle a tricky layout and configuration of the theater seats. Slanted walls dictated a rather unconventional arrangement of eight vintage-style chairs. “Guests wouldn’t be able to enter the room if the seats had been set up in rows across the width of the theater without crouching,” says Anderson. To ensure that guests could comfortably walk to their seats, a center aisle was designed, with four chairs on each side. 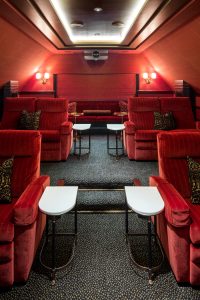 This clever and effective configuration set the tone for the rest of the theater design. A Sony 4K video projector suspended from the ceiling above the aisle is hidden within a custom-built “hush box” that was crafted to complement the period style. Admit One added a cooling system to make sure the projector would never overheat and to keep it in mint condition. The Sony projector is positioned perfectly to shoot vivid video to a 127-diagonal-inch Stewart Filmscreen screen that commands the front of the room. Seven JBL Synthesis speakers and two subwoofers round out the A/V accouterments, but they remain largely undetected, having been mounted to the walls and covered by acoustical panels, which were designed and fabricated in a special silk material by Admit One to hide the technology without muffling the audio … and of course, to satisfy the owners’ desire for downplayed electronics.

The last piece of the concealment puzzle was locating an impressive rack of A/V components so they would be out of sight yet easily accessible for service and maintenance. Unlike other spots that may have offered storage in a closet, this room was lacking any tuck-away area. Admit One and the project architect quickly devised a scheme that’s more than just a place to put gear, but adds an element of excitement to the home theater experience.

An authentic-looking ticket booth was designed and stands just outside the entrance to the theater. Built into the back side of the booth, a Middle Atlantic rack holds JBL Synthesis processors and amplifiers, an Integra processor, and a suite of Kaleidescape media servers. The entire rack slides out so that Admit One designers can easily reach the wiring and the rear of the components for any future equipment updates or upgrades. 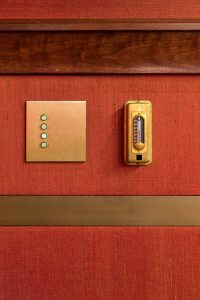 The culmination of this theater’s creative design, though, has to be the keypad that controls the entire A/V setup plus the lights. Instead of using a standard keypad that exudes a sleek, modern appearance, Admit One fashioned one to look much more … well, old-fashioned. Small backlit buttons were replaced with simple toggle-style buttons and an antique brass faceplate was applied. The custom keypad may look like a throwback from the early 1900s, but it’s anything but antiquated when it comes to operating the modern technology. Using an RTI processor as the room’s control platform, Admit One programmed the equipment to respond in a perfectly timed sequence to buttons pressed on the keypad or an RTI handheld remote. A single tap, for instance, dims the lights and activates the appropriate equipment for a spontaneous movie night; another shuts down everything as the owners and their guests exit.

For an extra touch, Admit One refurbished at old, non-working intercom system to allow the owners to easily communicate from the theater with family members through the enormous home. A fresh bucket of popcorn is just an intercom call away.

Screening Room Sensation: Well-engineered acoustics and A/V sets this dedicated theater apart from the rest of the house—audibly and visually. 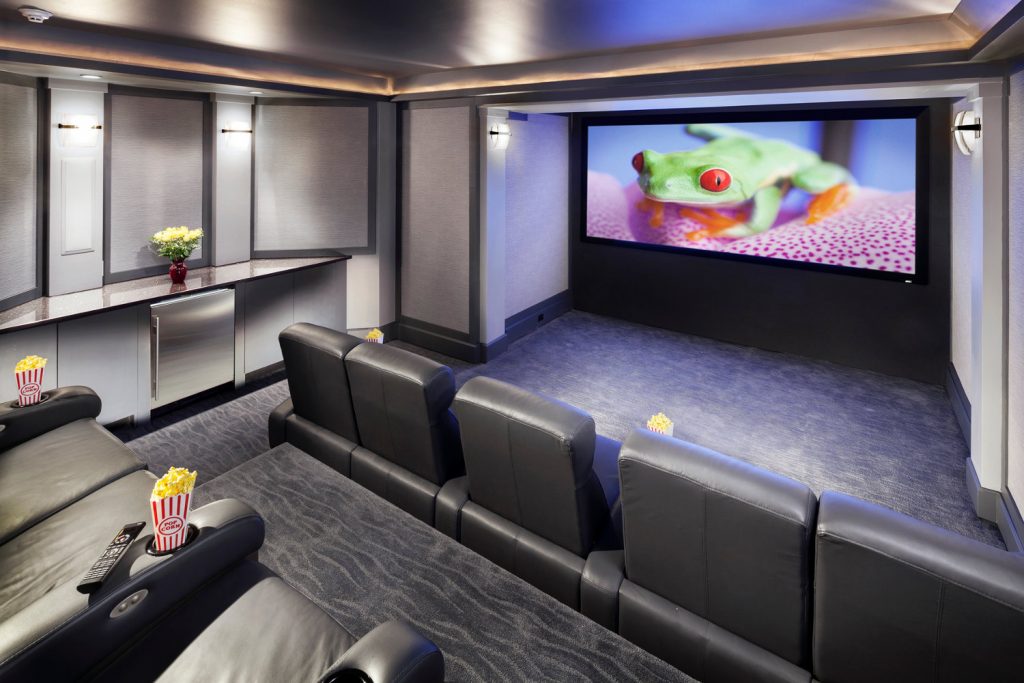 The family that owns this stunning theater had never been at a loss for places to watch movies in their home. “There are various other media areas with full surround-sound setups,” says Bob Gullo, chief creative officer at Electronics Design Group (EDG), a home systems integration firm based in Piscataway, N.J. “But what they were lacking was a singular-purpose room and a place where they could truly escape to enjoy their favorite films … a special entertainment destination. So while the house was undergoing a major renovation, the team at EDG transformed a portion of the home’s lower level into a dedicated home theater, complete with a sealed door to close it off from the rest of the house.

Soundproofing this room so that no noise from outside could enter or audio from the commercial-grade amps and speakers could leave was a top priority of the project. In addition to insulation behind the walls, above the ceiling, and inside the seating platform (provided by the general contractor), EDG covered the walls in acoustical fabric. In addition to enhancing the acoustical properties of the room, it gave EDG a place behind which to install the seven Klipsch speakers and two subwoofers. As is the case with most of its dedicated theater projects, EDG specified commercial-grade speakers and subs. “Choosing pro products provides an experience that’s closer to a real cinema than standard home theater products,” says Gullo.

The video performance is top-notch, too, thanks to a Sony 4K video projector, 138-inch Elite Screens screen, which are fed by an Oppo-Digital Blu-ray Disc player, Apple TV, and cable box. A Control4 SR-260 remote lets them control the gear, as well as three lighting scenes—high, medium, and low—provided by a Lutron QS system.